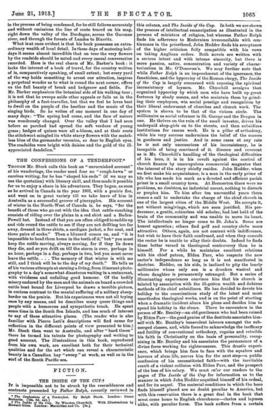 THE CONFESSIONS OF A TENDERFOOT.* THOUGH Mr. Stock calls this

book an "unvarnished account" of his wanderings, the reader need fear no "rough-hewn" or careless writing, for he has "shaped his ends" (if we may so use the quotation) with literary skill, and thus made it possible for us to enjoy a share in his adventures. They began, as soon as he arrived in Canada in the year 1901, with a prairie fire, and went on in great variety till we take leave of him in Australia as a successful grower of pineapples. His account of winter in the North-West of Canada is, he says, "for the benefit of those who go out with the idea that cattle-ranching consists of riding over the plains in a red shirt and a Baden- Powell bat. Instead of that you are often obliged to saddle up and ride round the cattle to see if they are not drifting too far away, dressed in three shirts, a cardigan jacket, a fur coat, and three pairs of socks." Then a blizzard comes on, and " it is impossible to head them home in the teeth of it," but " you must keep the cattle moving, always moving, for if they lie down they die, and so you drift on till the storm is over, perhaps in an hour, perhaps in a day, perhaps in two, but you must never leave the cattle. . . . The memory of that winter is with me still, and I think will be to the day of my death." He tells us of his various attempts at earning a living, from itinerant photo- graphy to a day's somewhat disastrous waiting in a restaurant, with vividness and unfailing good humour. Of the bodily misery endured by the men and the animals on board a crowded cattle boat bound for Liverpool he draws a terrible picture, in curious contrast to the mental suffering of a solitary sheep- herder on the prairie. But his experiences were not all trying ones by any means, and he describes many queer things and people with a humorous and sympathetic touch. He spent some time in the South Sea Islands, and has much of interest to say of these attractive places. (The reader who is also familiar with Pierre Loti's descriptions will find cause for reflection in the different points of view presented to him.) Mr. Stock then went to Australia, and after " hard times " there he turned his talents for photography and writing to good account. The illustrations in this book, reproduced from his own work, are excellent both for their technical qualities and for the art which can reveal a characteristic beauty in a Canadian hay " sweep " at work, as well as in the surf of the South Pacific sea.