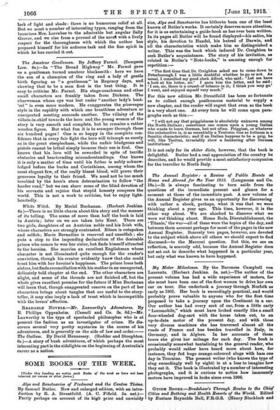 MIder this heading we notice such Books of the week as hate not been teemed for review in other forms.]

size, Alps and Sanctuaries has hitherto been one of the least known of Butler's works. It certainly deserves more attention, for it is as entertaining a guide-book as has ever been written. In its pages all Butler will be found displayed—his satire, his style, his devotion to Handel, his hatred of Darwin, and all the characteristics which make him so distinguished a writer. This was the book which induced Dr. Creighton to seek Butler's acquaintance. The story of his invitation, as related in Butler's " Note-books," is amusing enough for repetition :—

" The first time that Dr. Creighton asked me to come down to Peterborough I was a little doubtful whether to go or not. As usual, I consulted my good clerk Alfred, who said: 'Let use have a look at his letter, sir.' I gave him the letter, and he said : 'I see, sir, there is a crumb of tobacco in it; I think you may go.' I went, and enjoyed myself very much."

For this new edition Mr. Streatfeild has been so fortunate as to collect enough posthumous material to supply a new chapter, and the reader will regret that even so the book is a very short one. At every turn he will come upon para- graphs such as this :-

" I will not say that priggishness is absolutely unknown among the North Italians ; sometimes one comes upon a young Italian who wants to learn German, but not often. Priggism, or whatever the substantive is, is as essentially a Teutonic vice as holiness is a Semitic characteristic; and if an Italian happens to be a prig, he will, like Tacitus, invariably show a hankering after German institutions."

It is not only for its obiter dicta, however, that the book is delightful. Butler had a real appreciation of the country he describes, and he would provide a most satisfactory companion for the traveller to North Italy.