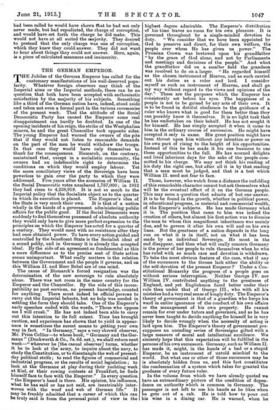 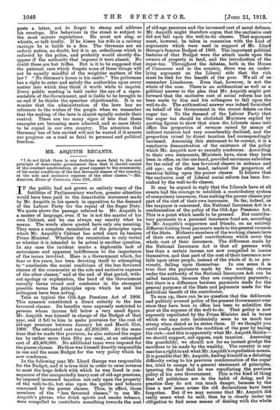 THE GERMAN EMPEROR. T HE Jubilee of the German Emperor has

called for the customary manifestations of his well-deserved popu- larity. Whatever foreign observers may think of the Imperial aims or the Imperial methods, there can be no question that both have been accepted with enthusiastic satisfaction by the majority of his subjects. Something like a third of the German nation have, indeed, stood aside and taken not even a formal part in the various ceremonies of the present week. That the attitude of the Social Democratic Party has caused the Emperor some real disappointment can hardly be doubted. In one of the opening incidents of his reign, the strike of the Westphalian miners, he and the great Chancellor took opposite sides. The young Emperor had warned the owners of the pits that if they would not listen to reasonable demands on the part of the men he would withdraw the troops. In that case they would have only themselves to thank for the consequences. Bismarck, on the contrary, maintained that, except in a socialistic community, the owners had an indefeasible right to determine the conditions on which they would employ labour. Yet the more conciliatory views of the Sovereign have been powerless to gain over the party to which they were addressed. Five years after the accession of William IL the Social Democratic votes numbered 1,787,000 ; in 1912 they had risen to 4,238,919. It is not so much to the Imperial policy that the Socialists object as to the quarter in which its execution is placed. The Emperor's idea of the State is very much their own. It is that of a nation wholly in the hands of a government administering public affairs for the public good. If the Social Democrats were suddenly to find themselves possessed of absolute authority they would only have to give more perfect expression to the principles on which the Emperor has acted for a quarter of a century. They would meet with no resistance after they had once obtained power. To have every action guided and controlled by the beneficent State is the Socialist ideal of a sound polity, and in Germany it is already the accepted ideal. By the side of an agreement so fundamental as this a mere difference as to the precise seat of State action seems unimportant. What really matters is the relation between the Government and the people it governs, and on this William II. and Herr Bebel are of one mind.

The cause of Bismarck's forced resignation was the determination of the new sovereign to rule absolutely alone. There was not room in the same country for the Emperor and the Chancellor. By the side of this incom- patibility no past services, no present knowledge, counted for anything. There must indeed be official persons to carry out the Imperial behests, but no help was needed in settling the form they should take. One of the Emperor's early speeches ended with the words, " Those who oppose me I will crush." He has not indeed been able to carry out this intention to its full extent. Time has brought caution, and experience has shown that to yield in appear- ance is sometimes the surest means to getting your own way in fact. " In Germany," says a very shrewd observer, Mr. Price Collier—to whose book, " Germany and the Ger- mans " (Duckworth & Co., 7s. 6d. net.), we shall return next week—" wherever he [the casual observer] turns, whether it be to look at the army, to inquire about the navy, to study the Constitution, or to disentangle the web of present- day political strife ; to read the figures of commercial and industrial progress, or the results of social legislation ; to look at the Germans at play during their yachting week at Kiel, or their rowing contests at Frankfort, he finds himself face to face with the Emperor." In every question " the Emperor's hand is there. His opinion, his influence, what he has said or has not said, are inextricably inter- woven with the woof and web of German life." It may be frankly admitted that a career of which this can be truly said is from the personal point of view in the highest degree admirable. The Emperor's distribution of his time leaves no room for his own pleasure. It is governed throughout by a single-minded devotion to duty. " We consider that we have been appointed by God to preserve and direct, for their own welfare, the people over whom He has given us power." The Prussian Crown was bestowed upon his grandfather "by the grace of God alone, and not by Parliaments and meetings and decisions of the people." And what the grandfather did on a smaller field the grandson was resolved to do on a larger. " He regarded himself as the chosen instrument of Heaven, and as such carried out his duties as a ruler and lord. I consider myself as such an instrument of Heaven, and shall go my way without regard to the views and opinions of the day." These are the purposes which the Emperor has consistently set before his eyes. The happiness of a people is not to be gained by any acts of their own. It is to be found in dutiful obedience to the guidance of a ruler who knows what is good for them better than they can possibly know it themselves. It is no light task that he has undertaken on their behalf. He has not sought it for himself. He has simply accepted it when it came to him in the ordinary course of succession. He might have accepted it only in name. His great position might have been thrust upon him without any intention or power on his own part of rising to the height of his opportunities. Instead of this he has made it his one business to use these opportunities to the full. He has scorned delights and lived laborious days for the sake of the people com- mitted to his charge. We may not think his reading of his duty the right one, but after all it is by that reading that a man must be judged, and that is a test which William II. need not fear to face.

Those, however, who watch from a distance the unfolding of this remarkable character cannot but ask themselves what will be the eventual effect of it on the German people. This may seem a question that admits of but one answer. It is to be found in the growth, whether in political power, in educational progress, in material and commercial wealth, of the Emperor's subjects. He has made Germany what it is. The position that came to him was indeed the creation of others, but almost his first action was to dismiss the man to whom this magnificent inheritance was mainly due, and to govern it after his own will and on his own lines. But the greatness of a nation depends in the long run on what it is in itself, not on what it has been made by an individual Sovereign. He must in the end disappear, and then what will really concern Germany is the power of her people to rule themselves when he who has ruled with so much care and devotion is withdrawn. To take the most obvious feature of the case, what if any of the successors to the throne lack either the ability or the self-devotion of the present Emperor ? Under a Con- stitutional Monarchy the progress of a people goes on without serious interruption. Neither George IV. nor William IV. contributed anything to the greatness of England, and yet Englishmen fared better under their rule than under that of George III., who with all his mistakes had a very real sense of kingly duty. The Emperor's theory of government is that of a guardian who keeps his ward in entire ignorance of the conduct of his own affairs or the management of his own property. He cannot remain for ever under tutors and governors, and as he has never been taught to decide anything for himself he is very likely to decide wrongly when the necessity of acting is laid upon him. The Emperor's theory of government pre- supposes an unending series of Sovereigns gifted with a large measure of moral and intellectual excellence. We sincerely hope that this expectation will be fulfilled in the persons of his own successors. Germany, such as William II. has made it, might, in the hands of a bad or a stupid Emperor, be an instrument of untold mischief to the world. But what one or other of those successors may be is absolutely hidden from us, and this fact constitutes the condemnation of a system which takes for granted the goodness of every future ruler. In the volume from which we have already quoted we have an extraordinary picture of the condition of depen- dence on authority which is common in Germany. The passenger is not left to use his hands as be likes when he gets out of a cab. He is told how to pour out his wine in a dining car. He is warned, when he posts a letter, not to forget to stamp and address his envelope. His behaviour in the street is subject to the most minute regulations. He must not sing, or whistle, or talk loudly. If he kisses his wife in a railway carriage he is liable to a fine. The Germans are an orderly nation, no doubt, but it is an orderliness which is enforced by the police, and probably would shortly dis- appear if the authority that imposes it were absent. No doubt these are but trifles. But is it to be supposed that the paternal care which forgets none of these things will not be equally mindful of the weightier matters of the law ? " No German's house is his castle." The policeman has a right to enter and satisfy the authorities upon every matter into which they think it worth while to inquire. Every public meeting is held under the eye of a repre- sentative of the Government, and is liable to be brought to an end if he thinks the speeches objectionable. It is no wonder that the administration of the laws has no reference to the wishes of the people when we remember that the making of the laws is almost equally outside their control. There are too many signs of late that these examples are becoming more admired, and so more likely to be copied in our own country. The attention that Germany has of late excited will not be wasted if it arrests our progress on a road so fatal to personal and political freedom.