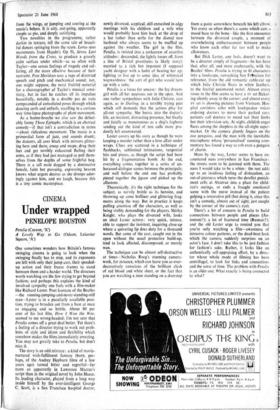 One sometimes wonders how Britain's famous swinging cinema is going to look when the swinging finally has to stop, and its exponents are left with only their jump cuts, their speeded- up action and their freeze frames to, stand between them and a harder world. The directors worth watching are the few trying to get beyond fashion; and perhaps this explains the kind of involved sympathy one feels with a film-maker like Richard Lester. Poet laureate of the Beatles —the running-jumping-and-never-standing-still man--Lester is in a peculiarly assailable posi- tion, trying to broaden out from a base at once so engaging and so brittle. About 80' per cent of his last film, How I Won the War, seemed to me wrong-headed; I'm not sure that Petulia comes off a great deal better. Yet there's a feeling of a director trying to work out prob- lems of style and idiom and flexibility which somehow makes the films immediately arresting. You may not greatly take to Petulia, but don't miss it.

The story is an odd mixture : a kind of movie- nurtured wish-fulfilment fantasy (born, per- haps, of the Audrey Hepburn films of a few years ago) turned bitter and regretful—far more so apparently in Lawrence Marcus's script than in the original novel by John Haase. Its leading character, played from a long way inside himself by the ever-intelligent George C. Scott, is a San Francisco hospital doctor, newly divorced, sceptical, still enmeshed in edgy meetings with his children and a wife who would probably have him back at the drop of a hat rather than settle for the dismal new husband who always seems to be muffled up against the, weather. The girl in the film, Petulia, is twisted into a corkscrew of assertive attitudes: descended, she lightly tosses off, from a line of Bristol prostitutes (a likely story); married to a rich but impotent (I suppose) yacht designer with a habit of beating her up; • fighting to live up to some idea of whimsical waywardness: the sort of girl who would turn up with a tuba.

Petulia is a focus for unease : the fey dream- girl with all her neuroses out in the open. And one rather sympathises with Julie Christie, cast again, as in Darling, in a terribly trying part which still demands that the actress play for all-out sympathy. She bursts into the doctor's life, an insistent, distracting presence, but finally and fatally as monotonous as a ship's foghorn sending out the kind of sos calls more pru- dently left unanswered.

Lester covers up his story as though he were keeping a murder rather than a love affair under wraps. Clues are scattered in a technique of flashbacks, subliminal intimations, tangential bits and pieces, as though the script had been hit by a fragmentation bomb. At the end, everything comes together in a series of un- harassed dialogue scenes between the principals; and well before the end one has probably pieced together the jigsaw and picked up the allusions.

Theoretically, it's the right technique for the subject, as nervily brittle as its heroine, and throwing up some brilliant and glittering frag- ments along the way. But in practice it keeps pulling attention off the characters, as well as being visibly demanding for the players. Shirley Knight, who plays the divorced wife, looks an ideal Lester actress: very quick, intense, able to support the insistent, inquiring close-up where a quivering lip does duty for a thousand words. But some of the cast, caught out in the open without the usual protective build-up, tend to look affected, discomposed, or merely wan.

The technique can be almost self-destructive at times—Nicholas Roeg's stunning camera- work, for instance, which can leave you so over- decoratively conscious of the brilliant clash of red blood and white sheet, or the fact that you are watching a man standing on asloorstep from a point somewhere beneath his left elbow. Yet every so often there's a scene which cuts a mood bare to the bone—like the first encounter between the divorced couple, a moment of overwhelming embarrassment between people who know each other far too well to make allowances.

But Dick Lester, one feels, doesn't want to be a director simply of fragments—he has been that, after all, and more exuberantly, with the

Beatles' films. Petulia is trying to fit characters into a landscape, ransacking San Frencisco for

relevance, from the old romantic cable-car up which Julie Christie floats in white feathers, to the fearful automated motel. Almost every

room in the film seems to have a TV set flicker- ing silently away in the corner; and almost every TV set is showing pictures from Vietnam. Hos-

pital corridors echo with loudspeaker voices ordering doctors to move their parked cars; patients call doctors to mend not their limbs but their television sets. At night, childish anger flares among the sleepless in the all-night super- market. Or the camera glumly lingers on the zoo penguins, and the man with the inevitable microphone whose 'personalised' running com- mentary has found a way to rob even a penguin of charm.

More by the way, Lester seems to have en- countered nuns everywhere in San Francisco : the streets seem to be jammed with them. The nuns I would take to be a whim : the rest adds up to an insidious feeling of dislocation, an out-of-jointness which turns the derelict punish- ment cells at Alcatraz into a place for child- ren's outings, or ends a fraught emotional scene with the nurse instead of the patient gulping a restorative pill (but doing it, since this isn't a comedy, almost out of sight, just caught by the corner of the camera's eye).

There's a lot of concern in Petulia to build connections between people and places (An-. tonioni?); a lot of fractured time (Resnais?);' and the old Lester urge to remind you that you're only watching a film—awareness of intrusive colour patterns, or the dead-beat look which the camera suddenly surprises on an actor's face. I don't take this to be just fashion for fashion's sake. Rather, it looks like an authentically self-appraising effort, by a direc- tor whose whole mode of filming has been centrifugal, to look for links and connections and the sense of time. The problem with Petulia• is an older one. What exactly is being connected to what?