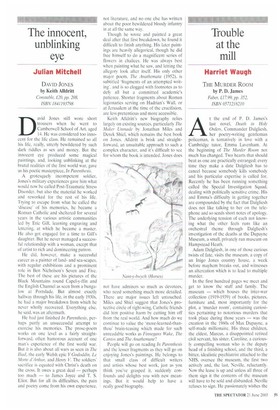 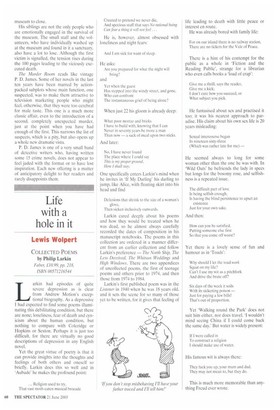 Trouble at the mill

t the end of P. D. James's last novel. Death in Holy Orders, Commander Dalgliesh, her poetry-writing gentleman policeman, is tentatively in love with a Cambridge tutor, Emma Lavenham. At the beginning of The Murder Room not much has changed. Two hearts that should beat as one are practically estranged; every time they make a date Dalgliesh has to cancel because somebody kills somebody and his particular expertise is called for. Recently he has been running something called the Special Investigation Squad, dealing with politically sensitive crime. His and Emma's difficulty in getting together are compounded by the fact that Dalgliesh does not like talking to her on the telephone and so sends short notes of apology. The underlying tension of each not knowing what the other feels runs like an orchestral theme through Dalgliesh's investigation of the deaths at the Dupayne Museum, a small, privately run museum on Hampstead Heath.

Adam Dalgliesh, in one of those curious twists of fate, visits the museum, a copy of an Inigo Jones country house, a week before mayhem breaks out, and witnesses an altercation which is to lead to multiple murder.

In the first hundred pages we meet and get to know the staff and family. The museum — which houses the inter-war collection (1919-1939) of books, pictures, furniture and, most importantly for the plot, a 'murder room', containing curiosities pertaining to notorious murders that took place during those years — was the creation in the 1960s of Max Dupayne, a self-made millionaire. His three children, the eldest, Marcus, a disappointed retired civil servant, his sister, Caroline, a curiously compelling woman who is the deputy head of a finishing school, and the third, a bitter, idealistic psychiatrist attached to the NHS, oversee the museum, the first two actively and, the last, Neville, reluctantly. Now the lease is up and unless all three of them sign it the contents of the museum will have to be sold and disbanded. Neville refuses to sign. He passionately wishes the museum to dose.

His siblings are not the only people who are emotionally engaged in the survival of the museum. The small staff and the volunteers, who have individually washed up at the museum and found in it a sanctuary, also have a lot to lose. Although the first victim is signalled, the tension rises during the 100 pages leading to the viciously executed death.

The Murder Room reads like vintage P. D. James. Some of her novels in the last ten years have been marred by actionpacked subplots whose main function, one suspected, was to make them attractive to television marketing people who might feel, otherwise, that they were too cerebral for male taste. This one is a much more classic affair, even to the introduction of a second, completely unexpected murder, just at the point when you have had enough of the first. This narrows the list of suspects, which is a pity, but also opens up a whole new dramatic vista.

P. D. James is one of a very small band of detective writers who, having written some 15 crime novels, does not appear to feel jaded with the format or to have lost inspiration. Each new offering is a matter of anticipatory delight to her readers and rarely disappoints them.