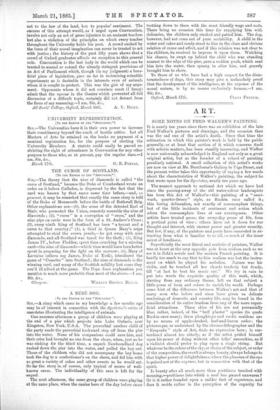 THE CURSE OF SCOTLAND.

rTo THE EDITOR OF THE 'SPECTATOR."] Stn,—The theory that the nine of diamonds is called "the -curse of Scotland," because the Duke of Cumberland wrote an -order on it before Culloden, is disproved by the fact that the card was known by that name some time before,—and, en passant, it may be remarked that exactly the same story is told of the Duke of Monmouth before the battle of Bothwell Brig. Other explanations are—(1), the arms of the detested Earl of Stair, who promoted the Union, remotely resemble the nine of diamonds ; (2), " curse " is a corruption of "cross," and the nine pips on cards were in the form of a St. Andrew's Cross; (3), every ninth King of Scotland has been "a tyrant and a curse to that country ;" (4), a thief in Queen Mary's reign attempted to steal the crown jewels,—he got away with nine diamonds, and all Scotland was taxed for the theft ; (ii), King James IV., before Flodden, spent time searching for a:missing card—the nine of diamonds—which time would have been better spent in preparing for the fight on the morrow; (6), Mary of Lorraine (others say James, Duke of York), introduced the game of " Comette " into Scotland ; the nine of diamonds is the winning card, and many of the Scottish nobility lost sums they could ill afford at the game. The Pope Joan explanation you mention is much more probable than most of the above.—I am, Sir, &c., Glasgow. WILLIAM GEORGE DEACII.