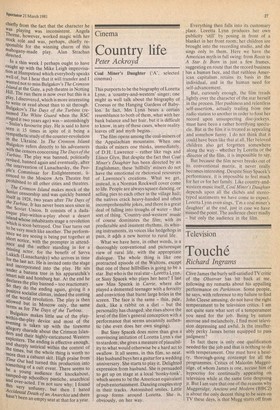 Coal Miner's Daughter (A', selected cinemas) This purports to be the biography of Loretta Lynn, a 'country-and-western' singer; one might as well talk about the biography of Croesus or the Hanging Gardens of Babylon. In fact, Mrs Lynn bears a certain resemblance to both of them, what with her bank balance and her hair, but it is difficult to know, in any of these cases, where reality leaves off and myth begins.

The film opens among the coal-miners of the Appalachian mountains. When one thinks of miners one thinks, immediately, of D.H. Lawrence — rather like rugs and Elinor Glyn. But despite the fact that Coal Miner's Daughter has been directed by an Englishman, these 'hillbilly' miners do not have the emotional or rhetorical resources of Lawrence's creations. What we get, instead, is a Norman Rockwell cover come to life. People are always square dancing, or selling pies to each other in the village hall; the natives crack heavy-handed and often incomprehensible jokes, and there is a great deal of falling into troughs of water — that sort of thing. 'Country-and-western' music of course dominates the film; with its predictable and insistent rhythms, its whining instruments, its voices like hedgehogs in pain, it acids a new horror to rural life.

What we have here, in other words, is a thoroughly conventional and picturesque view of rural life, with the appropriate dialogue. The whole thing is like one protracted episode of the Waltons, except that one of these hillbillies is going to be a star. But who is the real star— Loretta Lynn, or Sissy Spacek who plays her here? I last saw Miss Spacek in Carrie, where she played a demented teenager with a ferocity and conviction that burnt large holes in the screen. The face is the same — thin, pale, dank, like a rabbit on a diet — but the personality has changed; she rises above the level of the film's general conception with a performance that seems uncannily authentic (she even does her own singing).

But Sissy Spacek does more than give a convincing imitation of Loretta Lynn's rise to stardom; she gives a measure of plausibility to what would otherwise be a hard act to swallow, It all seems, in this film, so neat. Her husband buys her a guitar for a wedding anniversary. She starts to play it. Delighted expression from husband. She is persuaded to get up on stage at a local 'honky-tonk', which seems to be the American equivalent Of pub entertainment. Dancing couples stop in their tracks. Astonished smiles. Little group forms around Loretta. She is, obviously, on her way. Everything then falls into its customary place. Loretta Lynn produces her own publicity 'still' by posing in front of a blanket in her front room; her children are brought into the recording studio, and she sings only to them. Here we have the American myth in full swing: froth Roots to A Star Is Born in just a few frames, suggesting en route that the record business has a human face, and that ruthless American capitalism, retains its basis in the individual, and in the human need for self-advancement.

But, curiously enough, the film treads lightly over the character of the star herself in the process. Her pushiness and relentless self-assertion, actually trailing from one radio station to another in order to foist her record upon unsuspecting disc-jockeys, 'must have been a rather horrifying spectacle. But in the film it is treated as appealing and somehow funny. I do not think that it could have been like that at all. Her beloved children also get forgotten somewhere along the way — whether by Loretta or the director of the film, it is impossible to say.

But because the film never breaks out of its conventional matrix, it never really becomes interesting. Despite Sissy Spacek's. performance. it is impossible to feel much for her or for her family. Like coun try-andwestern music itself, Coal Miner's Daughter depends upon all the cliches and stereotyped sentiments we have come to expect. Loretta Lynn even sings, 'I'm a coal miner's daughter' at the end, just in case we have missed the point. The audience cheer madly — but only the audience in the film.