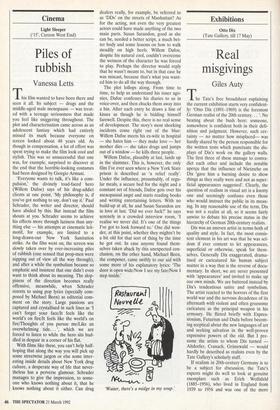 This film wanted to have been there and seen it all. Its subject — drugs and the middle-aged male menopause — was treat- ed with a teenage seriousness that made you feel like sniggering throughout. The plot and characterisation came across as an adolescent fantasy which had entirely missed its mark because everyone on screen looked about 48 years old. As though in compensation, a lot of effort was spent trying to make the film look cool and stylish. This was so unsuccessful that one was, for example, surprised to discover at the end that the horrible-looking costumes had been designed by Giorgio Armani.

`Everyone wants to talk, it's like a com- pulsion,' the divinely toad-faced hero (Willem Dafoe) says of his drug-addict clients at one point, 'My philosophy is, if you've got nothing to say, don't say it.' Paul Schrader, the writer and director, should have abided by this. But instead the film shouts at you. Schrader seems to achieve his effects more through laziness than any- thing else — his attempts at cinematic leit- motif, for example, are limited to a long-drawn-out New York Sanitation strike. As the film went on, the screen was slowly taken over by ever-increasing piles of rubbish (one sensed that prop-men were nipping out of view all the way through), and after a while the symbolism became so emphatic and insistent that one didn't even want to think about its meaning. The slop- piness of the direction becomes really offensive, meanwhile, when Schrader resorts to using pop lyrics (specially com- posed by Michael Been) as editorial com- ment on the story. Large passions are captured and crystallised in such lines as 'I can't forget your face/It feels like the world's on fire/It feels like the world's on fire/Thoughts of you pursue me/Like an overwhelming tide. . . ', which we are forced to listen to while the hero sits hud- dled in despair in a corner of his flat.

With films like these, you can't help half- hoping that along the way you will pick up some streetwise jargon or else some inter- esting inside details about New York drug culture, a desperate way of life that never- theless has a perverse glamour. Schrader manages to give the impression, to some- one who knows nothing about it, that he knows nothing about it either. Can drug dealers really, for example, be referred to as `13Ds' on the streets of Manhattan? As for the acting, not even the very greatest actors could have made anything of the two main parts. Susan Sarandon, good as she can be, needed a better script, a much bet- ter body and some lessons on how to walk steadily on high heels. Willem Dafoe, despite his natural cool, couldn't overcome the wetness of the character he was forced to play. Perhaps the director would reply that he wasn't meant to, but in that case he was miscast, because that's what you want- ed him to do all the way through.

The plot lollops along. From time to time, to help us understand his inner ago- nies, Dafoe confesses his diaries to us in voice-over, and then chucks them away into a bin. After each entry he draws a line of kisses as though he is bidding himself farewell. Despite this, there is no real sense of development. The story's most shocking incidents come right out of the blue: Willem Dafoe meets his ex-wife in hospital — she hates him — they make love — her mother dies — she takes drugs and jumps out of a window — he kills three people.

Willem Dafoe, plausibly at last, lands up in the slammer. This is, however, the only film I've ever seen where a New York State prison is described as 'a relief really'. Under the influence, presumably, of regu- lar meals, a secure bed for the night and a constant set of friends, Dafoe gets over his menopausal angst and starts reading books and writing entertaining letters. With no build-up at all, he and Susan Sarandon are in love at last. 'Did we ever fuck?' he says serenely in a crowded interview room, 'I realise we never did. It's one of the things I've got to look forward to.' One did won- der, at this point, whether they mightn't be a bit old for that sort of thing by the time he got out. In case anyone found them- selves taken aback by this unexpected con- clusion, on the other hand, Michael Been, the composer, came swiftly to our aid with some more of his explanatory lyrics: 'The door is open wide/Now I see my fate/Now I step inside.'

`Waiter, there's a midge in my soup.'