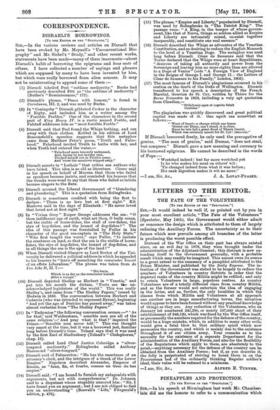 [To THY EDITOR OP THE " SPECTATOR." J Srs,—In the various reviews and articles on Disraeli that have been evoked by Mr. Meynell's "Unconventional Bio- graphy" and Mr. Sichel's " Study," and other recent works, statements have been made—many of them inaccurate—about Disraeli's habit of borrowing the epigrams and bons mots of others. I have collected a number of sayings and phrases which are supposed by many to have been invented by him, but which were really borrowed from alien sources. .It may not be uninteresting to append some of them :—

(2) Disraeli's phrase, "Peace with honour," is found in Coriolanus, III. 2, and was used by Burke.

(18) In " Coningsby " Disraeli gibbeted Croker in the character of Rigby, and included him as a writer among the "Forcible Peebles." One of the characters in the second part of King Henry IV. is a rustic named Feeble, and

Falstaff addresses him as "most forcible Feeble."

Disraeli said that Peel found the Whigs bathing, and ran away with their clothes. Kebbel in his edition of Lord Beaconsfield's speeches suggests that this metaphor came from Matthew Prior's poem, "Truth and False- hood." Falsehood invited Truth to bathe with her, and when Truth had entered the water,—

" Falsehood more leisurely undressed, And, laying by her tawdry vest, Tricked herself out in Truth's array, And 'cross the meadows tripped away."

(6) Disraeli accused the Liberal Government of "blundering and plundering." This is a quotation from Bolingbroke.

Disraeli is sometimes credited with being the first to declare : "There is no love but at first sight." Kit Marlowe said in the days of Elizabeth : "He never loved that loved not at first sight."

" His brain, Which is as dry as the remainder biscuit After a voyage."

(10) Disraeli depicted Shelley as Herbert in "Venetia," and put into his mouth the dictum, "Poets are the un- acknowledged legislators of the world." This was really Shelley's, and came from "The Shelley Papers," issued by Medwin in 1833. The conversation between Herbert and Cadnrcis (who was intended to represent Byron), beginning "And yet the age of Pericles has passed away," was taken almost verbatim from "The Shelley Papers."

(11) In " Endymion" the following conversation occurs:—" 'As for that,' said Waldersbare, sensible men are all of the same religion.'—` And pray what is that ?' inquired the Prince.—' Sensible men never tell.' " This was thought very smart at the time, but it was a borrowed jest, familiar long before Disraeli's time. Poland says that it was used by the first Earl of Shaftesbury (Poland's " Cledophorus," chap. 13).

(13) Disraeli said of Palmerston: "He has the smartness of an attorney's clerk, and the intrigues of a Greek of the Lower Empire.' Napoleon described Alexander, Emperor of Russia, as "faux, fin, et fourbe, comme un Grec du bas empire."

(14) Disraeli said : "I am bound to furnish my antagonists with arguments, but not with comprehension." Dr. Johnson said to a disputant whose stupidity annoyed him : "Sir, I have found you an argument ; but I am not obliged to find you an understanding" (Boswell's "Life," Fitzgerald's edition, p. 476).

In "Vivian Grey" Essper George addresses the sea: "0 thou indifferent ape of earth, what art thou, 0 bully ocean, but the stable of horse-fishes, the stall of cow-fishes, the stye of hog-fishes, and the kennel of dog-fishes?" The idea of this passage was forestalled by Fuller in his character of the good sea-captain in "The Holy State." "Who first taught the water," says Fuller, "to imitate the creatures on land, so that the sea is the stable of horse- fishes, the stye of hog-fishes, the kennel of dog-fishes, and in all things the sea is the ape of the land?"

When Disraeli visited Glasgow as Lord Rector of the Uni- versity he delivered a political address in which he appealed to his hearers to "leave off munching the remainder biscuit of an effete Liberalism." The phrase was taken from As You Like It, II. 7:— (15) The phrase, "Empire and Liberty," popularised by Disraeli, was used by Bolingbroke in "The Patriot King." The passage runs: "A King, in the temper of whose govern- ment, like that of Nerva, things so seldom allied as Empire and Liberty are intimately mixed, co-exist together inseparably, and constitute one real essence."

(16) Disraeli described the Whigs as advocates of the Venetian. Constitution, and as desiring to reduce the English Monarch to the level of a Venetian Doge. The metaphor was used long before Disraeli. Cesar de Saussure said that the Tories declared that the Whigs were at heart Republicans, "desirous of taking all authority and power from the Sovereign and leaving him no more rights than are allowed to a Doge of Venice' (vide "A Foreign View of England in the Reigns of George I. and George II.: the Letters of Cesar de Saussure to his Family," London, 1902).

(17) The most famous of Disraeli's plagiarisms occurred in his oration on the death of the Duke of Wellington. Disraeli transferred to his speech a description of the French Marshal, Gouvion de St. Cyr, written by Thiers for the Revue Trimestre in 1829, including a very apt quotation from Claudian,—

The plagiarism was quickly discovered and great political capital was made of it. One squib ran somewhat as follows :—

"Want of heart—a charge which one hears

*Gainst our Dizzy, can't stand, it is clear, Since he lets fall a great flood of Thiers (tears),

Which was certainly meant for St. Cyr! (sincere)."

If Disraeli 'borrowed freely, he only used the prerogative of genius. "The man of genius," said Dumas, "does not steal, but conquers." Disraeli gave a new meaning and currency to his borrowed epigrams. He cannot be described in the u-ords

of Pope :— " Wretched indeed ! but far more wretched yet

Is he who makes his meal on others' wit :

'Tis changed indeed from what it was before; His rank digestion makes it wit no more."