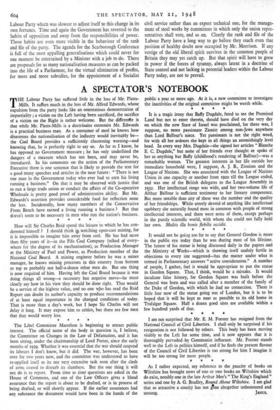 It is a tragic irony that Baffy Dugdale, fated to

see the Promised Land but not to enter therein, should have died on the very day on which the new State of Israel was proclaimed, for there was, I suppose, no more passionate Zionist among non-Jews anywhere than Lord Balfour's niece. Yet passionate is not the right word, for with all her ardours she kept in all things an astonishingly level head. In every way Mrs. Dugdale—she signed her articles " Blanche E. C. Dugdale," but none of her friends ever thought or spoke of her as anything but Baffy (childhood's rendering of Balfour)—was a remarkable woman. The greatest interests in her life outside her immediate household were, I suppose, A. J. B., Zionism and the League of Nations. She was associated with the League of Nations Union in one capacity or another from 192o till the League ended, and was one of the British delegates to the League Assembly in 1932. Her intellectual range was wide, and her two-volume life of Aithur Balfour is sufficient testimony to her literary competence. But more notable than any of these was the number and the quality of her friendships. While utterly devoid of anything like intellectual snobbery she naturally found most in common with people of strong intellectual interests, and there were none of them, except perhaps in the purely scientific world, with whom she could not fully hold her own. Muftis ills bonis fiebilis occidit.