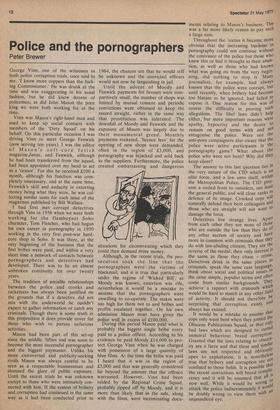 Police and the pornographers

Vinn was Mason's right-hand man and used to keep up social contacts with members of the `Dirty Squad' on his behalf. On this particular occasion I was driving Vinn ,to meet George Fenwick (now serving ten years). I was the editor of Mason's soft-core fetish magazine/anus, and Fenwick, although he had been transferred from the squad, had been appointed over my head to act as a 'censor'. For this he received £100 a month, although his function was cornpletely unecessary, and at the same time, Fenwick's skill and audacity in extorting money being what they were, he was collecting similar sums for each issue of the magazines published by Bill Wallace, I had first met corrupt detectives through Vinn in 1956 when we were both working for the flamboyant Soho character, Toni Fletcher, who had begun his own career in pornography in 1950 working in the very first post-war hardcore shop in Soho. It was there, at the very beginning of the business that the first bribes were paid, and within a very short time a network of contacts between pornographers and detectives had developed. There was to be an almost unbroken continuity for over twenty years.

The tradition of amiable relationships between the police and crooks and racketeers has always been justified on the grounds that if a detective did not mix with the underworld he couldn't expect to gather information or catch any criminals. Though there is some truth in this proposition it does provide cover for those who wish to pursue nefarious activities.

Mason had been part of this set-up since the middle 'fifties and was soon to become the most successful pornographer and the biggest paymaster. Unlike his more extroverted and publicity-seeking rivals Mason was always careful to be seen as a respectable businessman and shunned the glare of public exposure. Until the recent trials he was unknown except to those who were intimately connected with him. If the system of bribery and corruption had continued in the same way as it had been conducted prior to 1964, the chances are that he would still be unknown and the convicted officers would not now be languishing in jail.

Until the advent of Moody and Fenwick payments for favours were cornparitively small, the number of shops was limited by mutual consent and periodic convictions were obtained to keep the record straight, rather in the same way that prostitution was tolerated. The downfall of Moody and Fenwick and the exposure of Mason was largely due to their monumental greed. Monthly payments rocketed, 'licence fees', for the opening of new shops were demanded, often in the region of £3,000, and pornography was hijacked and sold, back to the suppliers. Furthermore, the police created embarrassing and dangerous

situations for circumventing which they could then demand more money.

Although, in the recent trials, the prosecution took the line that the pornographers were the victims of blackmail, and it is true that particularly under the regime of 'Wicked Bill', as Moody was known, extortion was rife, nevertheless it would be a mistake to assume that the pornographers were unwilling to co-operate. The stakes were too high for them not to and bribes and profits escalated together. On his own admission -Mason must have given the police well in excess of £100,000. During this period Mason paid what is probably the biggest single bribe every paid to a police officer. According to his evidence he paid Moody £14,000 to protect George Vinn when he was charged with possession of a large quantity of blue films. At the time the bribe was paid I heard that it was in the region of £5,000 and that was generally considered far beyond the amount that the offence warranted. However, Vinn had been raided by the Regional Crime Squad, probably tipped off by Moody, and it is more than likely that in the safe, along with the films, were incriminating docu ments relating to Mason's business. This was a far more likely reason to pay such a large sum. Throughout the 'sixties it became more obvious that the increasing business in

pornography could not continue without the conivance of the police but those who knew this or had it brought to their attention, as well as those who had known what was going on from the very-beginning, did nothing to stop it. Many journalists, for example, had always known that the police were corrupt, but until recently, when bribery had become too blatant to be ignored, had failed w expose it. One reason for this was of course the difficulty in proving such

allegations. The libel laws didn't help either, but more important reasons were apathy, hypocrisy and the desire to remain on good terms with and not antagonise the police. Were not the anti-porn campaigners also aware that the police were active' participants in the pornography game? What about the police who were not bent? Why did they • keep silent? The answer to this last question lies in the very nature of the CID which is an elite force, and a law unto itself, within

the Metropolitan Police. The CID presents a united front to outsiders, not least

the general public, and will close ranks hi defence of its image. Crooked cops will naturally defend their bent colleagues and those who are straight will not want to damage the force.

Detectives live strange lives. Apart from each other they -see more of those

who are outside the law than they do of

do with law-abiding citizens. They are the reverse of the medal; their only interest is the same as those they chase — crime. Detectives drink in the same places as

criminals, speak the same cant language' think about social and political issues in

come from similar backgrounds. TheY, achieve a rapport with criminals whic,,"

would be hard to match in any other fielu of activity. It should not therefore he, surprising that corruption exists an always has existed. It would be a mistake to assume that cops only went bent when they joined the Obscene Publications Squad, or that

bad laws which are designed to curtail immoral behaviour breed corruption. Granted that the laws relating to obscen ity are a farce and that these and similt laws are not respected and ohvi°Ll5''',. open to exploitation, it is nonetheles't true that bribery and corruption are Ilcit confined to those fields. It is possible tha the recent convictions will breed cotriPla,; cency and it will be assumed that all '_ now well. While it would be

attack the police indiscriminately it woula_ be doubly wrong to view them with an unjaundiced eye. wrong 1.!..