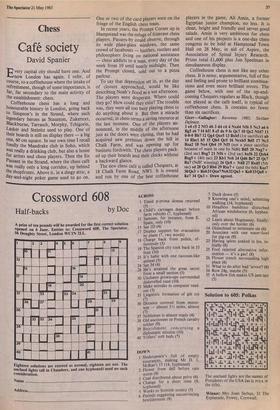 Every capital city should have one. And now London has again. I refer, of course, to a coffeehouse where the intake of refreshment, though of some importance, is far, far secondary to the main activity of the establishment: chess.

Coffeehouse chess has a long and honourable history in London, going back to Simpson's in the Strand, where such legendary heroes as Staunton, Zukertort, illackburne, Tarrasch, Morphy, Tchigorin, Lasker and Steinitz used to play. One of their boards is still on display there — a big One, 60 cm square. In our own time I recall fondly the Mandrake club in Soho, which was really a drinking club, but also a home for artists and chess players. Then the En Passant in the Strand, where the chess cafe was really only a long corridor, up behind the shopfronts. Above it, in a dingy attic, a day-and-night poker game used to go on. One or two of the card players were on the fringe of the English chess team.

In recent years, the Prompt Corner up in Hampstead was the refuge of itinerant chess players. Passers-by could observe, through its wide plate-glass windows, the same crowd of layabouts — hustlers, rustlers and philosophers living on national assistance — chess addicts to a man, every day of the week from 10 until nearly midnight. Then the Prompt closed, sold out to a pizza parlour.

To say that depression set in, as the day of closure approached, would be like describing Noah's flood as a wet afternoon. The players were desperate. Where could they go? How could they exist? The trouble was, they were all too busy playing chess to do anything about it. But then a miracle occurred, in chess terms a saving resource at the last moment. One of the players an- nounced, in the middle of the afternoon just as the doors were closing, that he had acquired new premises down the hill in Chalk Farm, and was opening up for business forthwith. The chess players pack- ed up their boards and their clocks without a backward glance.

The new chess cafe is called Chequers, at 18 Chalk Farm Road, NW1. It is owned and run by one of the best coffeehouse

players in the game, Ali Amin, a former Egyptian junior champion, no less. It is clean, bright and friendly and serves good salads. Amin is very ambitious for chess and one of his projects is a one-day chess congress to be held at Hampstead Town Hall on 28 May, in aid of Aspire, the Association of Spinal Injury Research. Prizes total £1,600 plus Jon Speelman in simultaneous display.

Coffeehouse chess is not like any other chess. It is noisy, argumentative, full of fire and feeling and prone to brilliant combina- tions and even more brilliant errors. The game below, with one of the up-and- coming Chequers regulars as Black, though not played at the cafe itself, is typical of coffeehouse chess. It contains no fewer than six sacrifices.