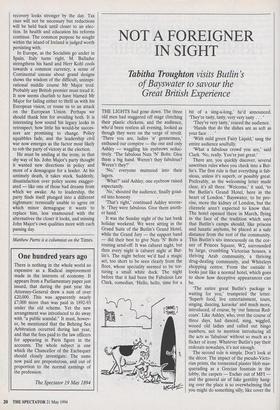 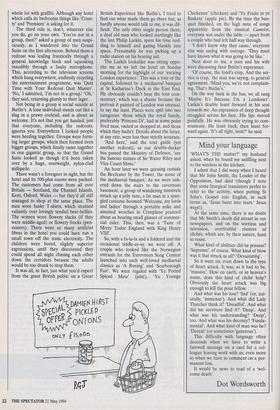 NOT A FOREIGNER IN SIGHT

of Bayswater to savour the Great British Experience

THE LIGHTS had gone down. The three old men had staggered off stage clutching their plastic chickens, and the audience, who'd been restless all evening, looked as though they were on the verge of revolt. 'There you are, ladies 'n' gennermen,' enthused our compere — the one and only Ashley — waggling his eyebrows seduc- tively. 'The fabulous Nuts 'N' Bolts. Give them a big hand. Weren't they fabulous? Weren't they?'

'No,' everyone muttered into their lagers.

'No,' shouted the audience, finally goad- ed into honesty.

It was the Sunday night of the last bank holiday weekend. We were sitting in the Grand Suite of the Butlin's Grand Hotel, while the Grand Jury — the support band — did their best to give Nuts 'N' Bolts a rousing send-off. It was cabaret night, but then every night is cabaret night at But- lin's. The night before we'd had a magic act, too short to be seen clearly from the floor, whose speciality seemed to be tor- turing a small white duck. The night before that it had been the Fabulous Lee Clark, comedian. 'Hello, hello, time for a bit of a sing-a-long,' he'd announced. 'They're tasty, tasty, very very tasty.

'They're very tasty,' roared the audience.

`What a fabulous crowd you are,' said Clark. 'No, really. You're just great.'

There are, you quickly discover, several unwritten rules when you check into a But- lin's. The first rule is that everything is fab- ulous, unless it's superb, or possibly great. Preferably, as the welcoming letter made clear, it's all three. 'Welcome,' it said, `to the Butlin's Grand Hotel, here in the heart of London.' Bayswater, to be pre- cise, more the kidney of London, but the clientele aren't expected to know that. The hotel opened there in March, flying in the face of the tradition which says that Butlin's camps should, like prisons and lunatic asylums, be placed at a safe distance from the rest of the community. This Butlin's sits innocuously on the cor- ner of Princes Square, W2, surrounded by large, crumbling Victorian houses, a thriving Arab community, a thriving drug-dealing community, and Whiteleys shopping centre. From the outside it looks just like a normal hotel, which goes to show how deceptive appearances can be.

'The entire great Butlin's package is waiting for you,' trumpeted the letter. 'Superb food, live entertainment, tours, singing, dancing, karaoke' and much more, introduced, of course, by 'our famous Red- coats'. Like Ashley, who, over the course of three days, had danced, sung, wiggled, wooed old ladies and called out bingo numbers, not to mention introducing all the acts as 'fabulous' without so much as a flicker of irony. Whatever Butlin's pay their redcoats nowadays, it's not enough.

The second rule is simple. Don't look at the decor. The impact of the pseudo-Victo- rian prints, the tormented plaster blob mas- querading as a Grecian fountain in the lobby, the carpets — Escher out of MFI — and the general air of fake gentility hang- ing over the place is so overwhelming that you might do something silly, like cover the whole lot with graffiti. Although any hotel which calls its bedrooms things like 'Coun- ty' and 'Premiere' is asking for it.

The third rule is, don't, whatever else you do, go on your own. 'You're not in a group, then?' asked a group of men suspi- ciously, as I wandered into the Grand Suite on the first afternoon. Behind them a redcoat was leafing frantically through a general knowledge book and squeaking inaudibly through a faulty microphone. This, according to the television screens which hung everywhere, endlessly recycling the entertainment programme, was 'Quiz Time with Your Redcoat Quiz Master'. `No,' I admitted, `I'm not in a group.' Oh,' they said, returning glumly to their lager.

Not being in a group is social suicide at Butlin's. A lone individual stands out like a slug in a prawn cocktail, and is about as welcome. It's not that you get hassled, just that everyone, including the redcoats, ignores you. Everywhere I looked people were herding together. Groups were form- ing larger groups, which then formed even bigger groups, which finally came together in one gigantic group, so that the Grand Suite looked as though it'd been taken over by a huge, overweight, nylon-clad millipede.

There wasn't a foreigner in sight, but the hotel and its 500-plus rooms were packed. The customers had come from all over Britain — Scotland, the Channel Islands, Kent, Oxford, Wales — but they'd all still managed to shop at the same place. The men wore funky T-shirts, which strained valiantly over lovingly tended beer-bellies. The women wore flowery slacks (if they were middle-aged) or flowery frocks (pen- sioners). There were so many artificial fibres in the hotel you could have run a small town off the static electricity. The children wore bored, slightly superior expressions, until they discovered they could spend all night chasing each other down the corridors because the adults would be too drunk to stop them.

It was all, in fact, just what you'd expect from the great British public on a Great British Experience like Butlin's. I tried to find out what made them go there but, as hardly anyone would talk to me, it was dif- ficult. The only other single person there, a deaf old man who looked startlingly like the late Philip Larkin, spent his time nod- ding to himself and gazing blankly into space. Presumably he was picking up a radio station on his hearing aid.

The Larkin lookalike was sitting oppo- site me as we left the hotel on Sunday morning for the highlight of our 'exciting London experience'. This was a tour of the capital, followed by a mediaeval banquet at St Katharine's Dock in the East End. He obviously couldn't hear the tour com- mentary, which was a shame because the portrait it painted of London was unusual, to say the least. Places were split into two categories: those which the royal family, preferably 'Princess Di', had at some point lived near, visited or shopped at, and those which they hadn't. Details about the latter, at any rate, were less than strictly accurate.

'And here,' said the tour guide (yet another redcoat), as our double-decker bus passed the Ministry of Defence, 'are the famous statues of Sir Water Riley and Vice Count Slime.'

An hour later we were queuing outside the Beefeater by the Tower, the scene of the mediaeval banquet. As we were ush- ered down the stairs to the cavernous basement, a group of wandering minstrels struck up a jolly tune, a fat man in a span- gled costume boomed 'Welcome, my lords and ladies' through a portable mike and assorted wenches in Crimplene pranced about us bearing small glasses of commer- cial cider. This, then, was a 'Taste of Merry Tudor England with King Henry So, with a fa-la-la and a folderol and the occasional tiddle-ay-ay, we were off. A couple who looked like the Norwegian entrants for the Eurovision Song Contest launched into such well-loved mediaeval classics as 'A Roving' and 'Scarborough Fair'. We were regaled with 'Ye Potted Spiced Mete' (pâté), 'Ye Younge Chickenne' (chicken) and 'Ye Fruits in ye Baskets' (apple pie). By the time the ban- quet finished, on the high note of songs apparently from the musical Camelot, everyone was under the table — apart from a couple who had left half way through.

'I don't know why they came,' everyone else was saying with outrage. 'They must have known what it was going to be like.'

Next door to me, a man and his wife were discussing their Butlin's experience.

'Of course, the food's crap. And the ser- vice is crap,' the man was saying, to general agreement. 'Mind you, we're not complain- ing. That's Butlin's.'

On the way back in the bus, we all sang 'Maybe It's Because I'm a Londoner'. Larkin's double leant forward in his seat towards me. An expression of deep thought struggled across his face. His lips moved painfully. He was obviously trying to com- municate. He leant back, then leant for- ward again. 'It's all right, innit?' he said.