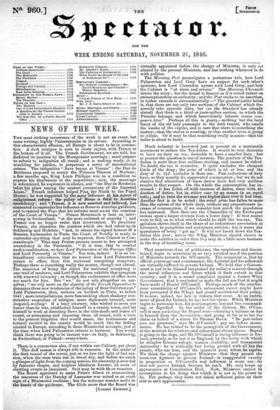 THE most striking occurrence of the week is not an event, but some writing, highly. Palmerstonian in its savour. According to this characteristic effusion, all Europe is about to be in commo- tion. A dark intrigue is seen in every region, with France at the bottom of it all. The French Government, we are told, has forfeited its position by the Montpensier marriage ; must prepare to submit to indignities all round ; and is making ready, in its :truckling for pardon, to perpetrate a series of international crimes. The indignities " have begun at Vienna" : the Duc de

- Bordeaux proposed to marry the Princess Theresa of Modena ; a few months ago, King Louis Philippe was in a condition to -express his displeasure at the negotiation ; now, the marriage is solemnized, he asquiescei in silence, and "the Duc de Bordeaux takes his place among the nearest connexions of the Imperial house." French influence helped Pius, the Ninth to the Papal throne ; he was supported by the same influence in his career of enlightened reform : the policy of Rome is fatal to Austrian ascendancy ; and "France, it is now asserted and believed, has consented to surrender her influence at Rome to Austrian guidance, and to remind the Pope that his reforms must await the sanction of the Court of Vienna." Prince Metternich is bent on inter- - posing in Switzerland, "at the next outbreak of anarchy "; and France can no longer resist that intervention. To propitiate Prussia, she abandons the position which she had taken up in Schleswig and Holstein ; " and, to obtain the signal honour of a -Russian Ambassador in Paris, the Court of Neuilly is ready to surrender anything that may be required, from Cracow to Con- stantinople." Thus may France procure assent to her attempted ascendancy in the Peninsula. " It is true, that to combat such a combination, we have Lord Palmerston at the Foreign Office and Lord Ponsonby at Vienna." Too true, indeed. It is an ex- traordinary coincidence, that no sooner does Lord Palmerston return to office, than this universal conspiring reappears. Perhaps there is something really the matter, though not abroad. The suspicion of being the object for universal conspiracy is one trait of madness, and Lord Palmerston exhibits that symptom with renewed intensity ; as though the excitements of office were too much for him. But " we ' do not rely altogether on our- selves; " we rely more on the alacrity of the French Opposition to denounce these new tendencies of the policy of their Government." Lord Palmerston, then, reckons on hubbub in Paris, as before 1841 ; more interpellations, more fuss-making about shadowy con- structive suspicions of intrigue, more diplomatic turmoil, more despatch-writing! If a' busy attorney, who wished to seem yet busier than he was, established himself in a county town, and set himself to work aedetecting flaws in the title-deeds and leases all round, or presuming and imputing them all round, with a view to the general litigation that would ensue, the restlessness and -turmoil excited in the county would be much like the feeling created in Europe, according to these Ministerial accounts, just at the time when Lord Palmerston returns to business. You would think there was going to be instant war—in Italy, in Schleswig, in Switzerland, in Poland—everywhere.