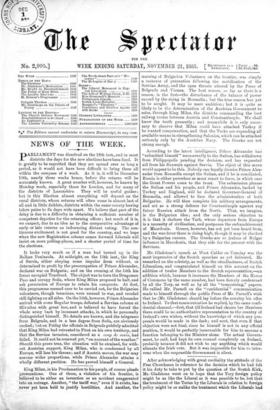 Mr. Gladstone's speech at West Calder on Tuesday was the

most impressive of the Scotch speeches as yet delivered. He remarked on the sobriety, as well as the steadfastness, of Scotch Liberalism, and congratulated himself on this account on the addition of twelve Members to the Scotch representation,—an addition which, because it increases the Members of the House of Commons by the same number, had been fiercely condemned by all the Tory, as well as by all the "temporising," papers. He rallied Mr. Parnell on the "confidential" communication made to himself through the public Press of Mr. Parnell's wish that he (Mr. Gladstone) should lay before the country his offer to Ireland. To that communication he replied, by the same confi- dential channel,—first, that till Ireland had chosen her Members there could be no authoritative representation to the country of Ireland's own wishes, without the knowledge of which any pro- posals would be made in the dark; and next, that even if that objection were not final, since he himself is not in any official position, it would be perfectly inexcusable for him to assume a function belonging to the Minister alone. The actual Govern- ment, he said, had kept its own counsel completely on Ireland, probably because it did not wish to say anything which would alienate the Irish vote. But it was impossible for him to inter- vene when the responsible Government is silent.