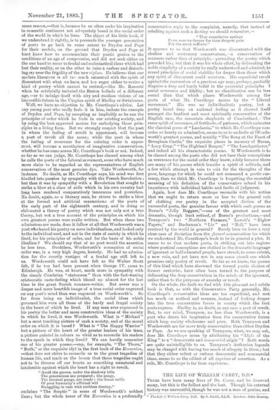 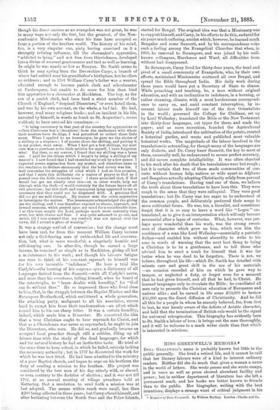 THE LIFE OF WILLIAM CAREY, D.D.* THERE have been many

lives of Dr. Carey, and he deserved many, but this is the fullest and the best. Though his external history was uneventful, though he was not a man of genius, and • Th. Life of William Carey D.D. By G. Smith, LLD. London : John Murray.

though his direct success as an evangelist was not great, he was in many ways not only the first, but the greatest, of the Non- conformist Missionaries who since his time have occupied so large a portion of the heathen world. The history of his mind, too, is a very singular one, piety having exercised on it a strangely refining influence, till the shoemaker's apprentice, "addicted to lying," and not free from thievishness, developed into a divine of unusual graciousness and tact as well as learning. In origin he was nearly as low as Bunyan. Dr. Smith seems to think he may spring from the Devonshire Carey, a branch of whom had settled near his grandfather's birthplace, but he offers no evidence ; and in 1761 William Carey's father was a weaver, educated enough to become parish clerk and schoolmaster at Pa,ulerspary, but unable to do more for him than bind him apprentice to a shoemaker at Hackleton. The boy, as the son of a parish clerk, had been bred a strict member of the Church of England, "despised Dissenters," or even hated them, and was by his own account, on the whole, a bad lad. He had, however, read many religious books ; and an incident in his life, narrated by himself, in words as frank as St. Augustine's, seems suddenly to have aroused his conscience :—

" It being customary in that part of the country for apprentices to collect Christmas box e [donations] from the tradesmen with whom their masters have deHlings, I was permitted to collect these little sums. When I applied to an ironmonger, he gave me the choice of a shilling or a sixpence; I of course chose the shilling, and putting it in my pocket, went away. When I had got a few shillings, my next care was to purchase some little articles for myself, I have forgotten what. But then, to my sorrow, I found that my shilling was a brass one. I paid for the things which I bought by using a shilling of my master's. I now found that I had exceeded my stock by a few pence. I expected severe reproaches from my master, and therefore came to the resolution to declare strenuously that the bad money was his. I well remember the struggles of mind which I had on this occasion, and that I made this deliberate sin a matter of prayer to God as I passed over the fields towards home! I there promised that, if God would but get me clearly over this—or, in other words, help me through with the theft—I would certainly for the future leave off all evil practices; but this theft and consequent lying appeared to me so necessary that they could not be dispensed with. A gracious God did not get me safe through. My master sent the other apprentice to investigate the matter. The ironmonger acknowledged the giving me the shilling, and I was therefore exposed to shame, reproach, and inward remorse, which preyed upon my mind for a considerable time. I at this time sought the Lord, perhaps much more earnestly than ever, but with shame and fear. I was quite ashamed to go out, and never, till I was assured that my conduct was not spread over the town, did I attend a place of worship."

It was a strange method of conversion ; but the change must have been real, for from this moment William Carey became not only a God-fearing man of unblemished life and conversa- tion, but, what is more wonderful, a singularly humble and self-denying one. In after-life, though he earned a large income, he remained as simple as in Hackleton, giving all but a maintenance to his work ; and though his labours fatigue one even to think of, his constant reproach to himself was for his own iucnrable "indolence." He bore a trial like Carlyle's—the burning of his magnum opus, a dictionary of all languages derived from the Sanscrit—with all Carlyle's nerve, and more than his sweetness, telling himself, when he heard of the catastrophe, to " learn Arabic with humility," for " God can do without thee." He so impressed those who lived close to him, that, in the straggle between the Baptist Mission and the Serampore Brotherhood, which embittered a whole generation, the attacking party, malignant to all his associates, strove hard to except him from their condemnation—au effort which roused him to his one sharp letter. It was a certain humility, indeed, which made him a Dissenter. He conceived the idea that a true Christian ought to bear reproach for Christ, and that as a Churchman was never so reproached, he ought to join the Dissenters, who were. He did so, and gradually became an accepted local preacher though still a cobbler, filling up all leisure time with the study of the dead languages, for which and for natural history he had an instinctive taste. He tried at the same time to keep school, in which he failed, entirely lacking the necessary authority ; but in 1787 he discovered the work for which he was best fitted. He had been admitted to the ministry of a poor Baptist church, and began to urge on his brethren the duty of sending a mission to the heathen. His project was considered by the best men of his day utterly wild, or absurd, or even contrary to the doctrine of election ; and it was not till 1792, at an annual meeting of village preachers held at Kettering, that a resolution to send forth a mission was at last adopted. The means within reach were small, less than £200 being collected in three years; but Carey offered himself, and after hesitating between the South Seas and the Pelew Islands,

started for Bengal. The original idea was that a Missionary was to support himself, and Carey, in his efforts to do this, endured for six years much suffering, amidst which, however, he learned much Bengalee and some Sanscrit, and by his correspondence woke such a feeling among the Evangelical Churches that when, in 1800, be removed to Serampore, and was joined by his well- known colleagues, Marshman and Ward, all difficulties from without had disappeared.

In Serampore, Carey lived for thirty-four years, the head and pivot of a small community of Evangelists, who, by their own efforts, maintained Missionaries scattered all over Bengal, and spread the Bible throughout India. His daily work during those years would have put a Secretary of State to shame. While preaching and teaching, he, a man without original education, and with an inclination to indolence, in a burning, or rather steaming, climate, with a most burdensome correspond- ence to carry on, and amid constant interruption, by in- cessant labour made himself one of the first Orientalists in the world ; governed the College for Civilians, set up by Lord Wellesley ; translated the Bible or the New Testament into thirty-four languages, cut types for them, and made the paper ; and as mere recreation, founded the Agricultural Society of India, introduced the cultivation of the potato, created a botanical garden, and wrote and published most valuable botanical works. The magnitude of the labour involved in the translations is astounding, for though many of the languages are only dialects, and Dr. Carey knew Sanscrit, the key to most of them, unusually well, he endeavoured to secure perfect accuracy, and did secure complete intelligibility. It was often objected to his work after his death that his translations were but rough ; but it is certain that two of them made communities of con- verts without human help, natives so wide apart as Afghans and Bengalees actually adopting Christianity solely from perusal of Carey's translations. Having read one of them, we believe the truth about these translations to have been this. They were rough in the sense that they were colloquial. They were good translations ; but Dr. Carey was too eager to be understood of the common people, and deliberately preferred their usage to more cultivated forms. He was, too, a literalist, and sometimes forgot that it is as easy to leave a word like " Logos " un- translated, as to give it an interpretation which will only become reverential after a lapse of centuries. What, however, was per haps more wonderful than his work, was the strong sweet- ness of character which grew on him, which won him the- confidence of a man like Lord Wellesley—essentially a patriotic Sultan—and enabled him without absurdity to write to his sons in words of warning that the next best thing to being a Christian is to be a gentleman, and to tell those who advised him to erect a tomb for himself that it was far better when he was dead to be forgotten. There is not, we believe, throughout his life—which Dr. Smith has detailed with minute care and great skill in the use of his materials —an occasion recorded of him on which he gave way to temper, or neglected a duty, or forgot even for a moment that he had given himself, and all that he had, to Christ. He learned languages only to circulate the Bible; he conciliated all men only to promote the Christian education of Europeans and natives alike ; and he earned in life some £50,000 to bestow £45,000 upon the direct diffusion of Christianity. And he did all this for a people in whom he scarcely believed, for, from first to last, he was keenly aware of the defects of Asiatic character,.

and held that the termination of British rule would be the signal for universal retrogression. This biography has evidently been to Dr. Smith a labour of love ; it brings out the man thoroughly, and it will be welcome to a much wider circle than that which is interested in missions.