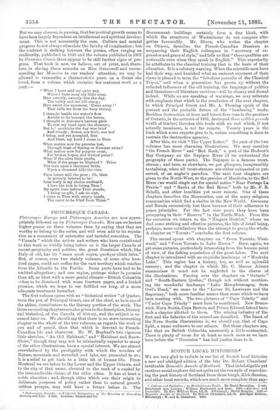 Picturesque Europe and Picturesque America are now appro- priately followed up by Picturesque Canada. Nor can we bestow higher praise on these volumes than by saying that they are worthy to belong to the series, and will even add to its reputa- tion as a monument of enterprise and tasteful execution. The " Canada " which the artists and writers who have contributed to this work so vividly bring before us is the larger Canada of recent geography and politics, the great Dominion which, like Italy of old, has its " mare quod supra, quodque alluit infra." But, of course, even two stately volumes, of some nine hun- dred pages, could not suffice for the vast territory which reaches from the Atlantic to the Pacific. Some parts have had to be omitted altogether ; and one region, perhaps richer in promise than all, as blest with a more genial climate—British Columbia —has to be dismissed with some fourteen pages, and a hinted promise, which we hope to see fulfilled ere long, of a more adequate treatment hereafter.

The first volume opens with an " historical review " of Quebec, from the pen of Principal Grant, one of the chief, as he is one of the ablest, contributors to the literary portion of the work. The three succeeding chapters are also given to the description, literary and historical, of the Canada of history, and the subject is re- sumed later on. We should say that there is no mare interesting chapter in the whole of the two volumes, as regards the work of pen and of pencil, than that which is devoted to French- Canadian life and character. Mr. W. Raphael's two vigorous little sketches, "An Old Habitant," and " Habitant and Snow- Slides," though they may not be intrinsically superior to many of the other illustrations, have a special interest. We are almost overwhelmed by the prodigality with which the wonders of Nature, mountain and waterfall and lake, are presented to us ; it is a relief to get back to a little bit of human life. From Montreal we are taken to the Lower and the Upper Ottawa, and to the city of that name, elevated to the rank of a capital by the irreconcileable claims of the older cities. It has at least a noble situation ; and, though cities which owe their origin to deliberate purposes of policy rather than to natural growth seldom prosper, may well have a future before it. The

• Picturesque Canada a Pictorial Delineation of the Beauties of Canadian Scenery and Life. 2 vols. London.: Cassell and Co.

Government buildings certainly form a fine block, with which the structures of Westminster do not compare alto- gether favourably. Mr. Dixon, who writes the chapter on Ottawa, describes the French-Canadian Members as surpassing their English colleagues in " accuracy of ex- pression and grace of style," and tells us that " these qualities are noticeable even when they speak in English." This superiority he attributes to the classical training that is the basis of their education. It is a salutary warning. When the scientific men have had their way, and banished what an eminent exponent of their views is pleased to term the "frivolous pursuits of the Classical Tripos," and when a generation has grown up without the reflected influences of the old training, the language of politics and literature—if literature survives—will be clumsy and dismal indeed. While we are speaking of warnings, we may reiterate with emphasis that which is the conclusion of the next chapter, in which Principal Grant and Mr. A. Fleming speak of the present and the probable future of the "lumbering" trade. Reckless destruction of trees and forest-fires (one in the province of Ontario, in the autumn of 1881, destroyed three million pounds worth of timber) threaten this trade with an end which, if not actually imminent, is not far remote. Twenty years is the limit which some experts give to it, unless something is done to restrain the destructive agencies.

After this, we visit "The Upper Lakes." No part of the two volumes has more charming illustrations. We may mention " On French River " and " Red Rock," a post of the Hudson's Bay Company on the Nepigon River (if we understand the geography of these parts). The Nepigon is a famous trout- stream ; and here, as elsewhere, we get glimpses, inexpressibly tantalising, when all trout-streams are either exhausted or pre- served, of an angler's paradise. The next four chapters are given to the North-West, to the prairies of Manitoba, to the Red River (we would single cat for special notice " Near Portage La Prairie" and " Banks of the Red River," both by Mr. F. B. Schell), and other localities yet more remote. One of these chapters describes the Mennonites, one of the many religious communities which find a shelter in the New World. Germany and Russia successively lost them because of their adherence to peace principles. For the last nine years they have been prospering in their " Reserve " in the North-West. From this far excursion we return to the "Niagara District," where we find some striking and effective pictures, the bits of detail being, perhaps, more satisfactory than the attempt to grasp the whole. A chapter on " Toronto " concludes the first volume.

The second, opens with chapters on " From Toronto, West- ward," and "From Toronto to Lake Huron." Here, again, we get some pictures, particularly interesting from the human point of view, of the fishing population of the great lakes. The next chapter is introduced with an exquisite landscape of " Muskoka Lake." This region has a history, too, as well as splendid scenery ; and the chapter in which Mr. C. Mercer Adams summarises it must not be neglected in the charm. of the illustrations. Passing over the chapters on " Ontario " and " South-Eastern Quebec," though not without mention- ing the wonderful landscape " Lake Memphremagog, from Owl's Head," we came to the "Lower St. Lawrence and the Saguenay," both more familiar names than some which we have been meeting with. The. two pictures of " Cape Trinity " and "Under Cape Trinity" mast here be mentioned. New Bruns- wick, Nova Scotia, Cape Breton, and Prince Edward Island have each a chapter allotted to them. The mining industry of the first and the fisheries of the second are described. The finest of the Nova Scotia illustrations is, we should say, that of Cape Split, a name unknown to our atlases. But these chapters are, like that on British Columbia, necessarily a little contracted. There is plenty of room for at least as much more as we have here before the " Dominion " has had justice done to it.