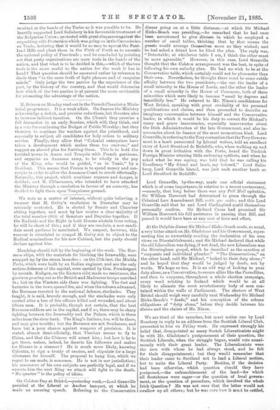 M. Brisson on Monday read out in the French Chamber

a Minis- terial programme. It is a weak affair. On finance the Ministry acknowledge a deficit, and promise reductions, but threaten also to increase indirect taxation. On the Church they promise a full discussion in an early Session, which will, they think, end in a vote for continuing the Bridget of Public Worship ; but they threaten to continue the warfare against the priesthood, and especially to subject all candidates for holy orders to military service. Finally, they allow that "Colonial enterprises have taken a development which makes them too onerous," and suggest an absurd plan for limiting them. This is to hold the fortified towns in Anam and Tonquin with French garrisons, and organise an Anamese army, to be wholly in the pay of the King, who would be guided, " as in Tunis," by a Resident. This means that France is to spend money and con- scripts in order to allow the Anamese Court to revolt effectually. Naturally, this project, which combines expense and danger, is derided; and M. Cl6mencean, who intended to have attacked the Ministry through a resolution in favour of an amnesty, has decided to fight them upon Tonquinese groand.