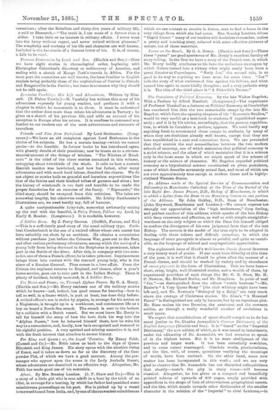 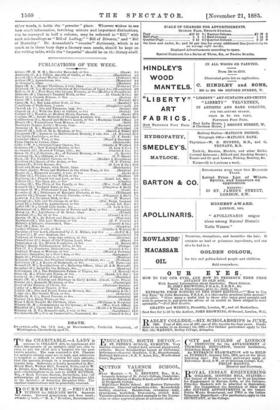 Page 23, 21 November 1885 — An Address made at the Special Service of Commemoration and
Close

An Address made at the Special Service of Commemoration and

Fellowship in. Manchester Cathedral at the Time of the Burial of the late Bight Rev. James Fraser, D.D., Bishop of Manchester, to which is added a Letter from the Dean to an Honorary Canon on one portion of the Address. By John Oakley, D.D., Dean of Manchester. (John Heywood, Manchester and London.)—We cannot express too strongly our appreciation of the "high seriousness," deep feeling, and perfect candour of this address, which speaks of the late Bishop with deep reverence and affection, as well as with simple straightfor- wardness on the only subject on which the Dean felt himself obliged to confess the divergence of his own judgment from that of the late Bishop. The sermon is the model of the true style to be adopted in dealing with these solemn and difficult occasions, in which the language of mere panegyric is almost as painful, and quite as unsuit- able, as the language of stinted and unsympathetic appreciation.

The eighteenth issue of Hood's well-known Comic Annual deserves a very hearty word of praise. If one must have frivolity at this time of the year, it is well that it should be given after the manner of a French dinner, and should be marked by variety and by abundance of sauce piquante in the form of illustrations. This we have here— short, crisp, bright, well-illustrated stories, and a wealth of them, by experienced providers of such things like Mr. G. R. Sims, Mr. H. C. Newton, Mr. Richard Butler, and Mr. Houghton. In point of real " fun "—as distinguished from the odious "comic business"—Mr. Butler's "A. Very Queer Story" (the club whiskey might have been left out), and Mr. Newton's " Betrayed by a Baby," are very much above the average of Christmas stories. Mr. Sims's "A. Mounted Patrol " is distinguished not only by humour, but by an ingenious plot. Mr. Sims makes his two Dromios, the aristocrat and the common soldier, go through a really wonderful number of evolutions in small space.

We regret that considerations of space should compel us to do but scant justice to Dr. Charles A.nnandale's Concise Dictionary of the English Language (Blackie and Son). It is " based" on the "Imperial Dictionary," the new edition of which, as it was issued in instalments, under the editorship of Dr. Annandale, we had occasion to speak of in the highest terms. But it is no mere abridgment of the previous and larger work. It has been essentially rewritten, and to some extent rearranged. Obsolete words, provineialiams, and the like, with, of course, quotations verifying the meanings of words, have been omitted. On the other hand, some new matter has been incorporated in this work ; and we are very glad to observe that Dr. Annandale has not discarded colloquialisms that shortly—more's the pity in many cases—will become classical. Altogether, he has given as a compact and beautifully printed volume of upwards of 800 pages, amply provided with appendices in the shape of lists of abbreviations, geographical names, and the like, which stands towards other dictionaries of the smaller character in the relation of the " Imperial" to rival Lexicons,—in oner words, it holds the " premier " place. Whoever wishes to see how much information, involving minute and important distinctions, cmn be conveyed in half a column, may be referred to "Bill," with such sub-headings as " Bill of Lading," " Bill of Divorce," and " Bill of Mortality." Dr. Annandale's "concise" dictionary, which is as much as in these busy days a literary man needs, should be kept on the writing-table, while the "Imperial" should be on the library-shelf.