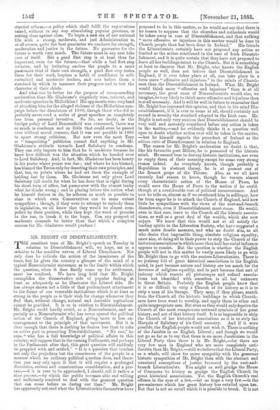 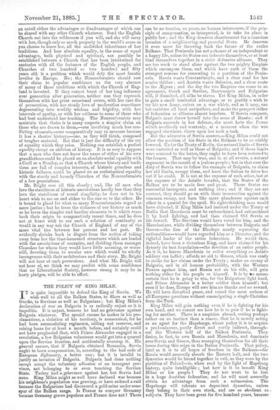 THE excellent tone of Mr. Bright's speech on Tuesday in relation to Disestablishment will, we hope, act as a sedative to the sensitive nerves of Liberal Churchmen. Not only does he ridicule the notion of the imminence of the issue, but he gives the country a glimpse of the mind of a typical Nonconformist statesman as to the limits within which the question, when it does fieally come up for settlement, must be* confined. We have long held that Mr. Bright exemplifies the Conservative side of popular feeling at least as adequately as he illustrates the Liberal side. He has always shown not a little of that predominant attachment 'to the forms of our venerable institutions which is at least as strong in the people as is their wish for change whenever they find that, without change, natural and desirable aspirations cannot be gratified. It is so in relation to Disestablishment. Mr. Bright could hardly avoid, as a Nonconformist, and es- pecially as a Nonconformist who has never spared the political action of the Church of England, giving more or less en- couragement to the principle of that movement. But it is clear enough that there is nothing he desires less than to take an active part in promoting Disestablishment. " No one," he says, " who has a full knowledge of political affairs in this country, will suppose that in the coming Parliament, and perhaps in the Parliament after that, this great question will suddenly be grappled with and settled." " It is a question that touches not only the prejudices but the consciences of the people in a manner which no ordinary political question does, and there- fore you may rely upon it that it will require a prolonged discussion, serious and conscientious consideration, and a pro- cess,--if it is ever to be approached, I should call it rather a slow process,—by which the public becomes able and willing and sufficiently resolved to deal with the greatest question that can come before us daring our time." Mr. Bright has apparently not read what the Liberationists themselves have

proposed to do in this matter, or he would not say that there is no reason to suppose that the churches and cathedrals would be taken away in case of Disestablishment, and that nothing " more offensive or injurious in this matter would be done to Church people than has been done in Ireland." His friends the Liberationists certainly have not proposed any action so limited as the action sanctioned in the case of Irish Disestab- lishment, and it is quite certain that they have not proposed to leave all her buildings intact to the Church. But it is something at least to discover that Mr. Bright, who knows the English people so well, does not believe that Disestablishment in England, if it ever takes place at all, can take place in a form more " offensive and injurious " to the minds of Church- men than the Disestablishment in Ireland. What Mr. Bright would think more " offensive and injurious " than is at all necessary, the great mass of Nonconformists would also, we imagine, be very likely to think more offensive and injurious than is at all necessary. And it will be well in future to remember that Mr. Bright has expressed this opinion, and that in his mind Dis- establishment, if it is ever to come at all, should certainly not exceed in severity the standard adopted in the Irish case. Mr. Bright is not only very anxious that Disestablishment should be very well and maturely considered before any action is taken in the matter,—and he evidently thinks it a question well open to doubt whether action ever will be taken in the matter, —but he himself regards the precedent of Ireland as the Wilma ratio of Disendowment in relation to England.

The reason for Mr. Bright's moderation no doubt is that, like his favourite poet Milton, he is possessed of the historic mind. He cannot bear to destroy historic institutions, nor even to empty them of their meaning except for some very strong reason indeed. As everybody knows, though probably a Republican in abstract theory, he is at present one of the firmest props of the Throne. Also, as we all have recently had reason to know, though he resents almost every characteristic action of the House of Peers, he would save the House of Peers to the nation if he could, though at a considerable cost of political inconvenience. And now he tells us, almost as if we overheard him in soliloquy, how far from eager he is to attack the Church of England, and how little he sympathises with the views of the root-and-branch disendowers, even if Disestablishment must come. He would, even in that case, leave to the Church all the historic associa- tions, as well as a great deal of the wealth, which she now enjoys. We know that this would not at all satisfy the leading spirits in the Liberation Society, who have suggested a much more drastic measure, and who no doubt aim, as all who desire that impossible thing, absolute religious equality, must aim, at doing all in their power to strip the Church of the historical associations in which more than half her social influence appears to consist. But the question is whether the English people will not in this matter be vastly more likely to go with Mr. Bright than to go with the austere Liberationists. There is no jealousy felt of great historical associations in the English mind, in part because nature and history are too much for the devotees of religious equality, and in part because that sort of jealousy which resents all picturesque and refined associa- tions not identified with ourselves, is all but unknown in Great Britain. Probably the English people know that it is as difficult to strip a Church of its history as it is to strip a man of his lineage. They may, if they please, snatch from the Church all the historic buildings in which Church- men have been wont to worship, and apply them to other and quite inappropriate uses. But even so they would only deprive the Church of the most conspicuous outward symbols of her great history, and not of that history itself. It is as impossible to strip the Church of her historical associations as it is to strip the Marquis of Salisbury of his Cecil ancestry. And if it were possible, the English people would not wish it. There is nothing of the Jacobin in an English Liberal ; and though we would not go so far as to say that there is no more Jaeobinism in the Liberal Party than there is in Mr. Bright,—for there are very few men in England who are more completely anti- Jacobin than Mr. Bright,--still we-believe that the Liberal Party, as a whole, will show far more sympathy with the generous historic sympathies of Mr. Bright than with the abstract and unnatural conceptions of justice favoured by the root-and- branch Liberationists. You might as well grudge the House of Commons its history as grudge the English Church its great historical associations. Yet the English Church's real offence in the eyes of a few,---let us hope a very few,—is the pre-eminence which her great history has entailed upon her. But that is not an entail which it is possible to break. It is not

an entail either the advantages or disadvantages of which can be shared with any other Church whatever. Send the English Church out into the wilderness if you will, and she will carry with her, though only so much property in the world's sense as you choose to leave her, all the undivided inheritance of her traditions. And how absolute equality, in the sense of equal advantages, both physical and spiritual, can possibly be established between a Church that has been intertwined for centuries with all the fortunes of the English people, and Churches of two hundred or two hundred and fifty years old, is a problem which would defy the most fanatic leveller in Europe. No; the Nonconformists should rest their claim to popular confidence on the very absence of many of those traditions with which the Church of Eng- land is invested. If they cannot boast of her long influence over generation after generation, neither can they reproach themselves with her great occasional errors, with her rare fits of persecution, with her steady love of moderation sometimes degenerating into worldly wisdom and frigidity, with her intervals-of apathy, or with her coldness to some of those who had best understood her teaching. The Nonconfcrmists may maintain that theirs is in many respects a simpler claim on those who are drawn to them,—one involving much less con- flicting elements,—one comparatively easy to measure because it has a shorter history,—one, as they will think, composed of tougher material. But that is just the difficulty of the cry of equality which they raise. Nothing can establish a perfect equality except an oblivion of history. It is as easy to suppose that a man who does not know the name of either of his own grandfathers could be placed on an absolute social equality with a Cecil or a Stanley, as that a Church whose history and tradi- tions are full of complex interests, of historic grandeur and historic failures, could be placed on an ecclesiastical equality with the sturdy and homely Churches of the Nonconformists of a few generations. Mr. Bright sees all this clearly ; and, like all men who love the stateliness of historic associations hardly less than they love the stateliness of moral simplicity, he does not in his heart wish to see an end either to the one or to the other. He is bound to plead for what so many Nonconformists regard as mere justice ; but he loves the richness of our history as much as he loves the simpler and hardier elements in it which trace back their origin to comparatively recent times, and he does not at heart wish to see such a solution of continuity as would in any way rob the Church of England of any of the more vital ties between her present and her past. He evidently shrinks back in disgust from the notion of taking away from her the time-honoured structures which are loaded with the associations of centuries, and dividing them amongst Churches for whom they would have little meaning, or worse still, devoting them to secular uses which would be wholly incongruous with their architecture and their story. Mr. Bright will not hear of such perversions. And what Mr. Bright will not hear of, we think we may predict with some confidence that no Liberationist Society, however strong it may be in hasty pledges, will be able to effect.