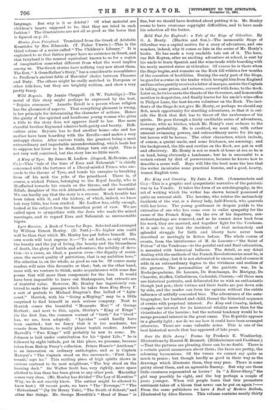 Lyra Heroica. A Book of Verse for Boys. Selected and

arranged by William Ernest Henley. (D. Nutt.)—No higher aim could well be than that which Mr. Henley has put before himself. His own words will best express it :—" To set forth, as only art can, the beauty and the joy of living, the beauty and the blessedness of death, the glory of battle and adventure, the nobility of devo- tion—to a cause, an ideal, a passion even—the dignity of resist- ance, the sacred quality of patriotism, that is my ambition here." His selection is, on the whole, as good as can be. Of course many readers will miss this favourite or that ; but, on the other hand, more will, we venture to think, make acquaintance with some fine poems that will more than compensate for the loss. It would have been impossible to leave out Shakespeare, but extracts are of doubtful value. However, Mr. Henley has ingeniously con- trived to make the passages which be takes from King Henry V. a sort of prelude to Michael Drayton's fine ballad of " Agin- court." Herrick, with his " Going a-Maying," may be a little surprised to find himself in such serious company. Next to Herrick comes the beautiful " Memento Mori " of George Herbert; and next to this, again, Shirley's " King of Kings " (in the first line, the common variant of "birth" for "blood" has, we see, been adopted). " Lycidas " could hardly have been omitted ; but we fancy that it is too academic, too

remote from Nature, to really please boyish readers. Andrew Marvell's "Two Kings" will probably be new to some. Dr.

Johnson is laid under contribution for his " Quiet Life; " he is followed by eight ballads, put in this place, we presume, because taken from Bishop Percy's collection. Prince Hoare's "Arethusa" is an innovation on ordinary anthologies, and so is Captain Marryat's "The Captain stood on the carronade : First Lieu- tenant,' says he." This rattling piece of high spirits shows in curious contrast to its next neighbour, " The boy stood on the burning deck." Sir Walter Scott has, very rightly, more space allotted to him than has been given to any other poet. Macaulay comes very close. (Mr. Henley has divided " The Lay of Horatius " Why, we do not exactly know. The author might be allowed to know best.) Of recent poets, we have " The Revenge,"' " The Birkenhead ''' (by Sir Henry Yule), "The Death of Sohrab," and other fine things. Mr. George Meredith's " Head of Brass " is

fine, but we should have doubted about putting it in. Mr. Henley seems to have overcome copyright difficulties, and to have made his selection all the better.