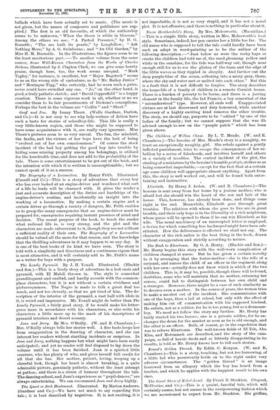 The Dash to Khartoum. By G. A. Henty. (Blackie and

Son.)— Mr. Henty begins this story with the well-worn complication of children changed at nurse. But he has given a certain novelty to it by arranging that the foster-mother—she is the wife of a serjeant, and nurses the child of an officer in the regiment along with her own—actually does not know which is which of the two children. This is, it may be, possible, though there will be found, doubtless, some who will maintain that no mother, retaining her senses, could fail to distinguish between her own child and a stranger. However, there might be a case of such similarity as to deceive even a mother. In the course of years, the woman tries to make a market out of the incident. She communicates with one of the boys, then a lad at school, but only with the effect of making him cut off communication with his supposed kindred. He enlists, not as a soldier, for he is too young, but as a drummer- boy. We need not follow the story any further. Mr. Henty has fairly started his two heroes ; one is a private soldier, for he ex- changes the drum for the musket as soon as he is old enough, and the other is an officer. Both, of course, go in the expedition that was to relieve Khartoum. The well-known fields of El Teb, Abu Klett, and Metemmeh are described, and the story of the cam. paign, so full of heroic deeds and so bitterly disappointing in its results, is told as Mr. Henty knows how to tell such stories.