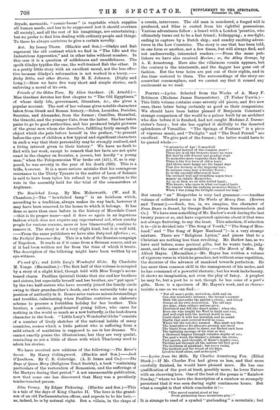 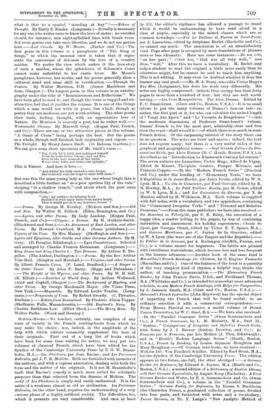 POETRY.—Lyrics. Selected from the Works of A. Mary F. Robinson

(Madame James Darmesteter). (T. Fisher Unwin.)— This little volume contains some seventy old pieces, and five new ones, these latter being certainly as good as their companions. We should have been better pleased if Benjamin Constant's strange comparison of the world to a palace built by an architect who dies before it is finished, had not caught Madame J. Darme- steter's fancy ; but she has applied it skilfully to the deserted splendours of Versailles. "The Springs of Fontana" is a piece of vigorous music, and " Twilight " and " The Dead Friend " are excellent. We give part of the former ; the latter would have to be quoted whole :— " 0 granaries of Age! 0 manifold

And royal harvest of the common years !

To memories more exquisite than Hope. Thine is the Iris born of olden tears, And thrice more happy are the happy days That live divinely in thy lingering rays.

So autumn roses bear a lovelier flower ; So in the emerald after-sunset hour The orchard wall and trembling aspen trees Appear an infinite Hesperides.

Ay, as at dusk we sit with folded hands,

Who knows, who cares in what enchanted lands We wander while the undying memories throne ?

When I was young the twilight seemed too long."

But surely " an" Hesperides is very bad grammar.—Another volume of collected poems is The Works of Henry Rose. (Reeves and Turner.)—Such, too, is, we imagine, the character of From Dawn to Sunset, by George Barlow (Swan Sonnenschein and Co.) We have seen something of Mr. Barlow's work during the last twenty years or so, and have expressed opinions about it that were not always flattering, to say the least. This selection, if selection it is—(it is divided into " The Song of Youth," " The Song of Man- hood," and " The Song of Riper Manhood ")—is a very strange mixture. There are " Religious Lyrics," and pieces that to a Christian are nothing less than revolting. Mr. Barlow has, as we have said before, some poetical gifts, but he wants taste, judg- ment, and the sense of responsibility.—The March of Man. By Alfred Hayes. (Macmillan.)—Mr. Hayes has written a volume of vigorous verse in which he preaches, not without some repetition, the doctrine of the advance of mankind towards perfection. He has more than common skill in the management of his metre, and he has command of a powerful rhetoric ; but his work lacks beauty. It shows no imagination, not even the play of fancy. A prophet he may be, but a poet he is not, though he has some of a poet's gifts. Here is a specimen of Mr. Hayes's work, and as charac- teristic a one as we can find :- " Not all man's pride, unwisdom, sloth and sin

Can stay mankind's advance ; the tyrant's scourge Doth but unsheathe the patriot sword; and Greed Grasps at his own destruction. The old days Are gone, when solitary nations grew, Flourished and fell like desert palms ; when she, Even she who taught the West to build and rule, And well-nigh knit the ancient world in one, Could shake it with her downfall, and no sound Startle that undi-covered world to come,

Where but the red-skin roamed. Man made not then The hemispheres his pleasure-ground, nor raced The blasts from shore to shore, nor flashed each hour The lightning message of his weal or woe

A thousand leagues through voiceless depths of sea; The poet's word, the thinker's scheme, the strain, Past speech, past thought, of Music's mighty sous, Thrilled not through all the nations till they grew The heirloom of mankind ; but every realm, The lordliest and the wisest of old days, Lived to itself alone, and so decayed."

—Lyrics from the Hills. By Charles Armstrong Fox. (Elliot Stock.)—If Mr. Charles Fox had given us less, and that more carefully finished, he would have pleased more. He has one qualification of the poet at least, possibly more; he loves Nature with an observing love. One of the best of the poems is " Rainbow Sunday," where we have the description of a rainbow so strangely persistent that it was seen during eight continuous hours. But what a couplet is that which concludes it !— " The sacred symbol stood at bay

It is strange to read of a symbol " garlanding" a mountain ; but what is that to a symbol " standing at bay " P—Echoes of Thought. By Emily E. Reader. (Longmans.)—It really is necessary for any one who writes verse to know the laws of metre ; no versifier should, for instance, mix eight-syllabled lines with blank verse Not even genius can take such liberties, and we do not see genius here.—Lost Chords. By W. Moore. (Parker and Co.) –The first poem in this volume is a paraphrase of " The Song of Songs," in which the unusual view is taken that it repre- sents the conversion of Solomon by the love of a country maiden. We prefer the view which makes it the love-story of such a maiden, whom the splendours of Solomon's Court cannot make unfaithful to her rustic lover. Mr. Moore's paraphrase, however, has merits, and his poems generally show a cultured mind and some skill in versification.—Through the Postern. By Walter Morrison, D.D. (James Maclehose and Sons, Glasgow.)—The longest poem in this volume is an autobio- graphy under the title of "Reminiscences and Reflections." We have been glad to read it ; and though the verse is rugged and un- attractive, feel that it justifies the volume. It is one of the things which a man would not write in prose, but which, though as poetry they are mediocre, are yet worth writing. The other poems show taste, feeling, thought, with an appreciative love of Nature. Dr. Morrison is scarcely a poet, but he writes well.— Westminster Chimes. By Maxwell Gray. (Kagan Paul, Trench, and Co.)—There are one or two attractive pieces in this volume, "A Game of Chess" being perhaps the best. But the poems as a whole, though well finished, lack originality and vigour. — The Twilight. By Henry James Snell. (56 Batoum Gardens.) — We can give some short specimens of Mr. Snell's verse :- " Day, f..irly tied, hath just unhinged himself From his yoke-fellow labour ; and sad Eve, Even in the very moment of her birth, Weeps dewy tears and writes out epitaphs."

This is Nature. And here is love :—

" And whilst her body showed a rare design,

Her heavenly soul out-leapt to mate with mine."

But was this the same young lady as the one whose tragic fate is described a little further on " as a poor spotless lily of the vale," sleeping " in a shallow trench," and about which the poet owns with compunction,—

" Alas ! my ruthless devastating hand Snatch'd it with eager haste from native heath. That it might perish iu my heartless breast' ?

—Poems. By George H. Kersley. (Bickers and Son.)—Old and New. By Walter H. Pollock. (Eden, Remington, and Co.) —Lyrics, and other Poems. By Lady Lindsay. (Kagan Paul, Trench, and Co.)—Crispus: a Drama. By H. Guthrie-Smith. (Blackwood and Sons.)—An Atonement of East London, and other Poems. By Howard Crawford, M A. (Same publishers.) — Figures of the Time. By Mrs. Massey. (Skeffington and Son.)— Lyrics and Epigrams, after Goethe and other German Authors. By M. Gray. (D. Douglas, Edinburgh.)—Lyra Consolationis. Selected and arranged by Claudia Frances Hernaman. (Longmans.) — King James and King Charles I.: Two Dramas. By Arthur E. Tre- gelles. (The Author, Darlington.)—Poems. By the Rev. Arthur Vine Hall. (Simpkin and Marshall.)— Virginia, and other Poems. By Albert Francis Cross. (P. Lund, Bradford.)—A Singer in the Outer Court. By Alice F. Barry. (Biggs and Debenham.) —The Knight of the Wyvern, and other Poems. By W. H. Self. (R. Elliott.)—Snatches of World Song. By Arthur Wellwood. (Aird and Coghill, Glasgow.)—The Background of Mystery, and other Verses. By George Macdonald Major. (De Vinne Press, New York.)—Rhymetets. By Edward Locke Tomlin. (Long- mans.)—Fragments of Verse. By Robert Swordy. (C. Thwaites, Durham.)—Echoes from Dreamland. By Frederic Alison Tupper. (Shelburne Falls, Massachusetts.)—Old England's Navy. By Charles Rathbone Low. (Elliot Stock.)—The Merry Muse. By Walter Parke. (Ward and Downey.)