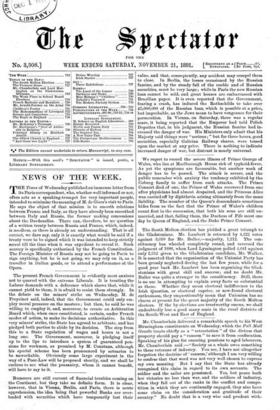 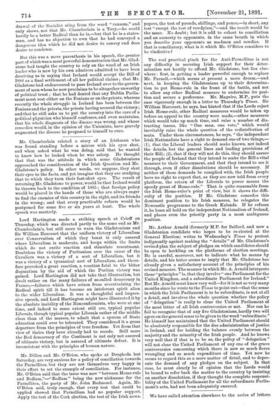 Mr. Chamberlain delivered a remarkable speech to his West Birmingham

constituents on Wednesday, which the Pall Mall Gazette treats chiefly as a " retractation " of the dictum that property should pay a " ransom " to save it from confiscation. Speaking of his plan for ensuring pensions to aged labourers, Mr. Chamberlain said :—" Society as a whole owes something to these veterans of industry. You see, I have not altogether forgotten the doctrine of ' ransom,' although I am very willing to confess that that word was not very well chosen to express my own meaning. But I say that the State has already recognised this claim in regard to its own servants. The soldier and the sailor are pensioned. Yes, but peace bath her victories no less than war, and the soldiers of industry, when they fall out of the ranks in the conflict and compe- tition in which they are continually engaged, they also have some claim on the consideration and gratitude of their country." No doubt that is a very wise and prudent with.

drawal of the Socialist sting from the word " ransom," and only shows, not that Mr. Chamberlain is a Tory,—he could hardly be a better Radical than he is,—but that he is a states- man, and has no objection to own that he had conveyed a dangerous idea which he did not desire to convey and does desire to condemn.