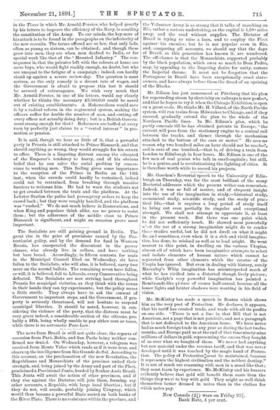 Page 19, 21 November 1891 — Mr. Edison has just announced at Pittsburg that his plan
Close

Mr. Edison has just announced at Pittsburg that his plan

for superseding steam by electricity on railways is now perfect, and that he hopes to try it when the Chicago Exhibition is open on a great scale. He thinks Mr. H. Villard, of the North Pacific, system, will run trains from Milwaukee to Chicago, and if they succeed, gradually extend the plan to the whole of the Northern Pacific lines. In Mr. Edison's plan, which he partly conceals till he has obtained patents in Europe, " the current will pass from the stationary engine to a central rail between the tracks, and thence through the mechanism attached to the bottom of the cars or motor." He sees no reason why two hundred miles an hour should not be reached, and is sure of one hundred,—that is, of driving a train from London to Edinburgh in four hours. Mr. Edison is one of the few men of real genius who talk in small-capitals ; but still, he is a genius, and is revolutionising the lighting of cities. It is therefore worth while to record his projects.