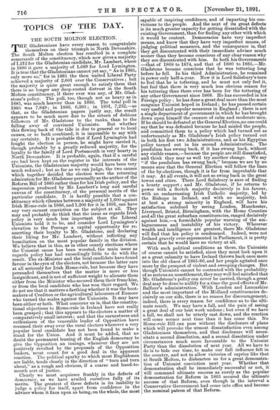 With such political conditions as these, the Unionists of course cannot be satisfied, since they must look upon it as a great calamity to have Ireland thrown back once more into the old chaos of 1885-86, and her people agitated once more by the prospect of violent and sweeping changes. But though Unionists cannot be contented with the probability of so serious an unsettlement, they may well feel satisfied that Mr. Gladstone's policy can never be carried, though a great deal may be done to nullify for a time the good effects of Mr. Balfour's administration. With London and Lancashire and the most important of the Midland constituencies de- cisively on our side, there is no reason for discouragement; indeed, there is every reason for confidence as to the ulti- mate result. We may have a fall, and the pain of seeing a great deal of our best work undone ; but even if we have a fall, we shall not be utterly east down, and the reaction will come sooner next time than it has come this. No Home-rule Bill can pass without the disclosure of plans which will provoke the utmost dissatisfaction even among Gladstonians themselves, and that disclosure will neces- sitate a second dissolution, and a second dissolution under circumstances much more favourable to the Unionist Party than the dissolution of next year. All we have to do is to bide our time, to make our full influence felt in the country, and not to allow victories of caprice like that at South Molten, to dishearten us for a great demonstra- tion of Unionist conviction next year. Whether that demonstration shall be immediately successful or not, it will command ultimate success as surely as the popular demonstration for Reform in 1865 secured the ultimate success of that Reform, even though in the interval a Conservative Government had come into office and become the nominal patron of that Reform.