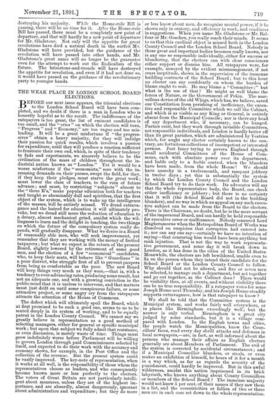 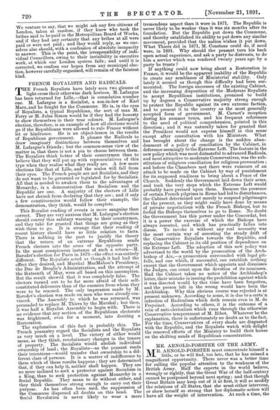 Page 23, 21 November 1891 — THE VVEAK PLACE IN LONDON SCHOOL BOARD ELECTIONS. B EFORE our
Close

THE VVEAK PLACE IN LONDON SCHOOL BOARD ELECTIONS. B EFORE our

next issue appears, the triennial elections to the London School Board will have been com- pleted, and we doubt if there is a man in London who is honestly hopeful as to the result. The indifference of the ratepayers is too great, the list of eminent candidates is too small, and the " cries " on which the election will turn, " Progress " and " Economy," are too vague and too mis- leading. It will be a great misfortune if " the progres- sives " obtain a heavy majority, for they will indulge their passion for quick results, which involves a passion for expenditure, until they will produce a reaction sufficient to frustrate their own end, which, in spite of their tendency to fads and experiments, we sincerely believe to be the civilisation of the mass of children throughout the in- dustrial nation known as " London." Yet it would be a worse misfortune if the " economists," sore with the in- creasing demands on their purses, swept the field, for they, if they keep their pledges, must starve the great work ; must lower the class of teachers, to the ruin of future advance ; and must, by restricting " subjects " almost to the " three R's," make popular education both for teachers and taught so abominably dull and spiritless, that the first object of the system, which is to wake up the intelligence of the masses, will be entirely missed. We dread extrava- gance and the hatred for education it will ultimately pro- voke, but we dread still more the reduction of education to a dreary, almost mechanical grind, amidst which the wil- lingness to learn and the delight in teaching, the two things on which the future of the compulsory system really de- pends, will gradually disappear. What we desire is a Board of reasonably able men, who will seek improvement, yet remember that they are working with the money of fretted taxpayers ; but what we expect is the return of the present Board, slightly lowered by the retirement of some good men, and the election of a few " economical " candidates, who, to keep their seats, will behave like " Guardians " in a poor district, who struggle first of all to prevent paupers from being as comfortable as the poor. The new Board will keep things very much as they were,—that is, with a tendency to ever-advancing rates, producing some result, but not an adequate one, and with a growing conviction in the public mind that it is useless to intervene, and that matters must just drift on until some conspicuous failure, or some attractive project, or some angry cry from the ratepayers attracts the attention of the House of Commons.

The defect which will ultimately spoil the Board, which at first promised to be such a good one, seems to us to be seated deeply in its system of working, and to be equally patent in the London County Council. We cannot say we greatly believe in representation as a good method of selecting managers, either for general or specific municipal work ; but upon that subject we fully admit that resistance, or even discussion, is merely waste of time. Things must grow indefinitely worse before Parliament will be willing to govern London through paid Commissioners selected by itself, and expected to do their work with the accuracy and economy shown, for example, in the Post Office and the collection of the revenue. But the present system could be vastly improved. The key-note of representation, when it works at all well, is the responsibility of those whom the representatives choose as leaders, and who consequently become known more or less perfectly to the electors. The voters of Great Britain are not particularly intelli- gent about measures, unless they are of the highest im- portance, and are absurdly, almost dangerously, ignorant about administration and expenditure ; but they do more or less know about men, do recognise mental power, if it be shown only in oratory, and efficiency in work, and readiness in suggestions. When you name Mr. Gladstone or Mr. Bal- four or Mr. Goschen, you really reach their minds. It seems to us that this cardinal object is missed both in the London County Council and the London School Board. Nobody in those great and important bodies becomes really known, nor is any one so responsible individually, either for success or blundering, that the electors can with clear consciences either support or dismiss him. All ratepayers were, for example, annoyed by the evident mismanagement, if not crass ineptitude, shown in the supervision of the immense building contracts of the School Board ; but to this hour no elector can say confidently on whom the burden of blame ought to rest. He may blame a " Committee ;" but what is the use of that ? He might as well blame the forces of Nature, or the Government of Pekin. The mar- vellous device of the old Whigs, which has, we believe, saved our Constitution from perishing of inefficiency, the execu- tive and responsible Committee which we call the Cabinet, and which is as visible as any King or General, is entirely absent from the Municipal Councils ; nor is there any head of any department who, if necessary, can be hanged. Parties exist, but they work through invisible Committees, not responsible individuals, and London is hardly better off than its great parishes, which are administered by Vestries which, for aught any elector certainly knows to the con- trary, are fortuitous collections of incompetent or interested persons. Just fancy trying to govern England through small accidental Committees of the House of Com- mons, each with absolute power over its department, and liable only to a feeble control, when the blunders have been made, from the whole • House ! We should have anarchy in a twelvemonth, and rampant jobbery in twelve days ; yet this is substantially the system by which the London County Council and the London School Board try to do their work. Its advocates will say that the whole representative body, the Board, can check either inefficiency or jobbery ; but there is no certainty that it will (the School Board did not in the building blunders), and no way in which an appeal on any such execu- tive subject can be made from the Board to the electors. There is the Chairman, no doubt, but he is the mere servant of the impersonal Board, and can hardly be held responsible for executive error or malfeasance. Nobody censured Lord Magheramorne when the Metropolitan Board of Works was dissolved on suspicion that corruption had entered into it ; nor can any one say—certainly we have no intention of saying—that censuring him would have been anything but rank injustice. That is not the way to work representa- tive government, and some day it will break down in London, as it has done in the cities of the United States. Meanwhile, the electors are left bewildered, unable even to fix on the person whom they intend their candidate for the School Board or the London County Council to follow. Why should that not be altered, and five or seven men be selected, to manage each a department, but act together and go out together, as the Cabinet does ? There would be visibility then, at all events, and without visibility there can be no true responsibility. If a ratepayer votes for some Joseph Hume next Thursday, and his Joseph Hume steadily supports extravagance, how is that ratepayer to know ?

We shall be told that the Committee system is the Municipal system, and works fairly well everywhere, or in places like Birmingham exceedingly well ; but the answer is only verbal. Birmingham is a great city judged by some standards, but it is a village com- pared with London. In the English towns and cities, the people watch the Municipalities, know the Coun- cillors' faces, read every day shrill attacks and defences in local newspapers,—are, in fact, as well informed about the persons who manage their affairs as English electors generally are about Members of Parliament. The evil of the system is corrected by accidental circumstances ; and if a Municipal Councillor blunders, or steals, or even makes an exhibition of himself, he hears of it for a month in a way which, as far as regards the severity of the punishment, could hardly be improved. But in this awful wilderness, amidst this nation imprisoned in its brick labyrinth, who knows anything about County Councillors or members of the School Board ? The immense majority would not know 5 per cent. of their names if they saw them in a list, and the eccentricities or follies of two or three men are in each case set down to the whole representation. We venture to say, that we might ask any five citizens of London, taken at random, if they knew who took the bribes said to be paid in the Metropolitan Board of Works, and if they had any certainty that any bribes at all were paid or were not paid ; and they would reply, as we our- selves also should, with a confession of absolute incapacity to answer. This is the point„ the irresponsibility of indi- vidual Councillors, owing to their invisibility in executive work, at which our London system fails ; and until it is corrected, we confess our hopes from any municipal elec- tion, however carefully organised, will remain of the faintest kind.