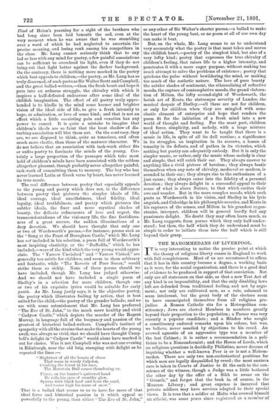 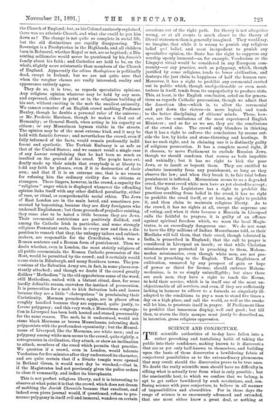 THE MAHOMMEDANS OF LIVERPOOL.

IT is very interesting to notice the precise point at which the theory of religious liberty ceases in England to work with full completeness. Most of us are accustomed to affirm that it has in this country become a dogma, a working basis as it were, for the social organisation, and there is a good deal of evidence to be produced in support of that conviction. Not only are all statesmen on that side, so that a new Test Act of any kind is an impossibility, and that the only disabling laws left are defended from traditional feeling, and not by argu- ment; not only are cultivated men, as a rule, ashamed to seem intolerant, but the great body of the electors seem to have emancipated themselves from all religious pre- judice. A Roman Catholic sits for a Metropolitan con- stituency; Jews are elected Members in numbers greatly beyond their proportion to the population ; a Parsee was very recently a popular candidate ; and a Hindoo who sought a constituency endured remarks upon his colour, but was, we believe, never assailed by objections to his creed. An avowed agnostic of an aggressive type was a member of the last Cabinet ; it is rather a recommendation in a poli- tician to be a Nonconformist; and the House of Lords, which on religious questions is decidedly Philistine, never dreams of inquiring whether a well-known Peer is or is not a Mahom- medan. There are only two non-ecclesiastical positions for which men are legally disqualified by creed ; the most anxious care is taken in Courts of Justice to fit the oath to the con-

science of the witness, though a Judge was a little bothered the other day by the offer of a Sikh to swear on the " Grtmth," and forgot that the book is, of course, in the Museum Library ; and great expense is incurred that private soldiers may have services adapted to their special views. It is true that a soldier at Malta who avowed himself an atheist, was some years since registered as a member of the Church of England; but, as his Colonel anxiously explained, there was no atheistic Church, and what else could he put him down as P The change is not quite so complete in social life, but the old distinctions are rapidly disappearing. The Sovereign is a Presbyterian in the Highlands, and all children born in Balmoral, whether Royal or not, are so baptised ; a Dis- senting millionaire would never be questioned by his fiancee's family about his faith ; and Catholics are held to be, on the whole, slightly more aristocratic than members of the Church of England. Apparently the odium theologicum is politically dead, except in Ireland ; but we are not quite sure that when the rougher classes are really interested, reality and appearance entirely agree.

They do so, it is true, as regards speculative opinions. Any religious opinion whatever may be held by any man, and expressed, either in print or in the religious building of his sect, without exciting in the mob the smallest animosity. We cannot conceive of an English crowd mobbing Professor Huxley, though he doubts a personal ruler of the universe ; or Mr. Frederic Harrison, though he makes a God out of Humanity; or General Booth, when acting in his capacity as citizen ; or any Mussulman layman visible in the streets. The opinion may be of the most extreme kind, and it may be held with fanatic fervour; and nevertheless the crowd, even if fully informed of the facts, would remain profoundly indif- ferent and apathetic. The Turkish Embassy is as safe as that of the United States ; and we cannot recall a single case of any Lascar complaining that he had been so much as insulted on the ground of his creed. The people have evi- dently made up their minds that everybody is at liberty to hold any faith he pleases, even if it is destructive of their own ; and that if it is an extreme one, that is no reason for refusing him the ordinary civility due to citizens or strangers. There lingers, however, in the crowd, a capacity for "religious " anger which is displayed whenever the offending opinion links itself with any other disliked peculiarity, either of race, or ritual, or comprehensible social ethics. The Jews of East London are in the main hated, and sometimes per- secuted by boycotting, because they are dirty foreigners who undersell Englishmen ; but those grounds of prejudice existing, they come also to be hated a little because they are Jews. Their ceremonial restrictions are positively disliked, and among the Catholic Irish in particular, and some strongly religious Protestant sects, there is every now and then a dis- position to remark that they, the unhappy tailors and cabinet- makers, are responsible for the Crucifixion, which was a Roman sentence and a Roman form of punishment. Then we doubt whether, even in London, the most strictly religious of all public ceremonials, the Roman Catholic procession of the Host, would be permitted by the crowd ; and it certainly would cause riots in Edinburgh, and many Southern towns. The pro- cessions of the Salvation Army are, in fact, in some places con- stantly attacked ; and though we doubt if the crowd greatly dislikes " Methodism " in the old opprobrious sense of the word, still Methodism, united with a blatant ritual, does, for some hardly definable reason, reawaken the instinct of persecution. It is persecution for a mob to kick Salvation lads and lasses because they are a little " obstropulous " in proclaiming their Christianity. Mormon preachers, again, are in places often roughly handled because they are supposed, quite justly, to favour polygamy ; and this very week, a Mussulman congrega- tion in Liverpool has been both hooted and stoned, presumably for the same reason. The mob, be it understood, would not stone black Mormons or brown Mussulmans, tolerating dark polygamists with the profoundest equanimity ; but the Mussul- mans of Liverpool, like the Mormons, are white men; and as polygamy among white men seems to the crowd, quite rightly, a retrogression in civilisation, they attack, or show an inclination to attack, members of the creed which permits that practice. We question if a crowd, even in London, would tolerate Voodooism for five minutes after they understood its character, and are quite certain that if a Sivaite temple were opened in Bethnal Green, it would next day be wrecked,—that is, if the Magistrates had not previously given the police orders to close it summarily, and indict its hierophants.

This is not perfect religions liberty, and it is interesting to observe at what point it is that the crowd, which does not dream of mobbing the Jewish Chronicle because that excellent, and indeed even pions journal would, if questioned, refuse to pro- nounce polygamy in itself evil and immoral, wanders on certain

occasions out of the right path. Its theory is not altogether wrong, or at all events is much closer to the theory of liberal statesmen than is generally imagined. They would say, we imagine, that while it is wrong to punish any religious belief qwi belief, and most inexpedient to punish any speculative. opinion, the State has the right to suppress any worship openly immoral—as, for example, Voodooism or the Lingayet ritual would be considered in any European com- munity—or any practice, such as polygamy, which, though justified by some religions, tends to lower civilisation, and destroys the just claim to happiness of half the human race. Moreover, it has a right to prohibit any ceremonial carried out in public which, though unobjectionable or even meri- torious in itself, tends from its unpopularity to produce riots. This, at least, is the English conclusion, acted on for genera- tions as regards Catholic processions, though we admit that the American idea—which is, to allow the ceremonial and put down the rioters—is more logical, and tends to the better disciplining of citizens' minds. These, how- ever, are the conclusions of the most experienced English Ministers ; and so far as we see, they are the conclusions of the crowd also. The crowd only blunders in thinking that it has a right to enforce the conclusions by means out- side the law, by kicks and stone-throwing and hootings. It has no such right, and in claiming one it is distinctly guilty of religious persecution. It has a complete moral right, if it chooses, to move Parliament to exclude Russian Jews, though we should condemn that course as both impolitic and unkindly ; but it has no right to kick the poor Jews, or to insult or boycott them. They are entitled to absolute immunity from any punishment, so long as they observe the law ; and when they break it, to fair trial before punishment is inflicted. Mormonism seems to us a degraded creed, the worstcreed white men have as yet elected to accept ; but though the Legislature has a right to prohibit the practices resulting from belief in the creed, it has no right to prohibit the creed itself, or at least, no right to prohibit it, and then claim to maintain religious liberty. As to the crowd, it has no rights at all, except the supreme one of voting, and when it riots because a Muezzin in Liverpool calls the faithful to prayers, it is guilty of an offence against spiritual freedom which, we warn the local Magis- trates, is an exceedingly dangerous one. We do not want to have the fifty millions of Indian Mussulmans told, as their Moollahs will tell them, that their creed, though tolerated in India, is proscribed in England ; that the call to prayer is considered in Liverpool an insult ; or that while Christian missionaries are protected in preaching to them, Mahom- medan missionaries, even though white men, are not pro- tected in preaching to the English. That Englishmen of cultivation, unmoved by any prospect of gain or hope of power or thirst for license, should embrace Mahom- medanism, is to us simply unintelligible ; but since there are such men, they have a right to teach the Koran, to hold their service, which is in itself one of the most un- objectionable of all services, and even, if they are sufficiently lacking in humour to adhere to a formula so singularly ill- adapted to the conditions to pay a man to stand five times a day on a high place, and call the world, as well as the smoke will let him, to prostrate itself in prayer. If Parliament likes to prohibit that innocuous display, well and good ; but till then, to storm the little mosque must justly be described as, in intention, gross religions oppression.