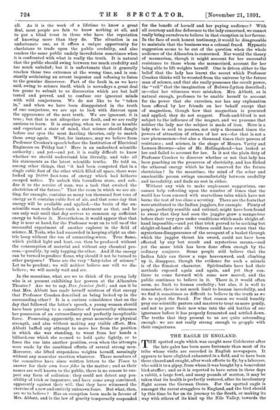 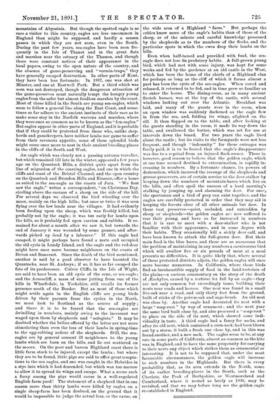 THE EAGLE IN ENGLAND.

THE spotted eagle which was caught near Colchester after the late gales has been more fortunate than most of its tribe whose visits are recorded in English newspapers. It appears to have alighted exhausted in a field, and to have been there chased and caught, after weak efforts to fly, by a labourer, who sold it to a gipsy, from whom it was bought by a benevolent bird-stuffier; and as it is reported to have eaten in three days a rabbit, a large fowl, and many pounds of mutton, it may be taken that its health is perfectly restored, after its involuntary flight across the German Ocean. For the spotted eagle is amongst the rarest stragglers to England, and the bird should by this time be far on its journey to the South, or making its way with others of its kind up the Nile Valley, towards the

mountains of Abyssinia. Bat though the spotted eagle is so rare a visitor to this country, eagles are less uncommon in England than might be supposed, and hardly a season passes in which they are not seen, even in the South. During the past few years, sea-eagles have been seen fre- quently in the Isle of Thanet and in the great flats and marshes near the estuary of the Thames, and though there were constant notices of their appearance in the local papers, owing to the open nature of the country, and the absence of game-preserving and " vermin-traps," they have generally escaped destruction. In other parts of Kent, they have been less fortunate. in 1887, one was shot at Minster, and one at Eastwell Park. But a third which was seen was not destroyed, though the dangerous attraction of the game-preserves must naturally tempt the hungry young eagles from the safer but almost foodless marshes by the coast. Most of those killed in the South are young sea-eagles, which seem to follow a general line along the East Coast, and some- times so far adhere to the ancient instincts of their race as to make some stay in the Norfolk warrens and marshes, where they were once so common as to be known as the " fen-eagles." But eagles appear in other parts of England, and it is probable that if they could be protected from those who, unlike shep- herds and gamekeepers, have neither lambs nor game to suffer from their ravenous appetite, some of these splendid birds might come once more to nest in their ancient breeding-places in the cliffs of the South and West.

An eagle which was clearly not a passing autumn traveller, but which remained till late in the winter, appeared a few years ago on the Quantock Hills, a district quite apart from the line of migration of the coasting eagles, and one in which the -cliffs and coast of the Bristol Channel, and the open country on the Quantock and Brendon Hills and Exmoor, offer a home as suited to the sea-eagle as the coasts of Jura. " We first saw the eagle," writes a correspondent, "on Christmas Day, circling above the carcass of a sheep on the side of the hill. For several days we observed the bird wheeling over the moor, mainly on the high hills ; but once or twice it was seen flying over the low lands near the villages. It had evidently been feeding upon the sheep, which was freshly killed, but probably not by the eagle ; it was too early for lambs upon the hills, so it probably fed upon carrion and rabbits. It re- mained for about a month after we saw it, but towards the end of January it was wounded by some gunner, and after- wards picked up dead by a labourer." If this eagle had escaped, it might perhaps have found a mate and occupied the old eyrie in Lundy Island, and the eagle and the red-deer might have once more become neighbours on the coasts of Devon and Somerset. Since the death of the bird mentioned, another is said by a good observer to have haunted the Quantocks, near St. Audreys ; if so, it has so far escaped the fate of its predecessor. Culver Cliffs, in the Isle of Wight, are said to have been an old eyrie of the erne, or sea-eagle ; and the Arnescliff, a mass of stone jutting from one of the hills in Wharfedale, in Yorkshire, still recalls its former presence south of the Border. But as most of those which might settle again in the English cliffs are young birds driven by their parents from the eyries in the North, we must look to Scotland as the source of supply ; and there it is to be feared that the sea-eagles are dwindling in numbers, mainly owing to the incessant war waged upon them by shepherds and " oologists." It may be doubted whether the bribes offered by the latter are not more stimulating than even the loss of their lambs in spring-time to the egg-robbing ardour of the shepherds. Still, the sea- eagles are by general consent ill neighbours to the young lambs which are born on the hills, and lie out scattered on the moors. On the poor and barren Highland coast there is little farm stock to be injured, except the lambs ; but where they are to be found, little pigs are said to offer great tempta- tions to the sea eagles, and one was caught in the Hebrides in a stye into which it had descended, but which was too narrow to allow it to spread its wings and escape. What a scene such a foray among the pigs would cause in a well-regulated English farm-yard! The statement of a shepherd that in one season more than thirty lambs were killed by eagles on a single sheep-farm has been doubted, on the ground that it would be impossible to jadge the actual loss, or the cause, on the wide area of a Highland " farm." But perhaps the critics know more of the eagle's habits than of those of the sheep, or of the minute and careful knowledge possessed by the shepherds as to the numbers of the flocks, and the particular spots in which the ewes drop their lambs on the hills.

Even when half-tamed and provided with food, the sea- eagle does not lose its predatory habits. A full-grown young bird, which had met with some injury, was kept for some weeks and fed by the gardener at an old castle in the West, which has been the home of the chiefs of a Highland clan for perhaps as long as the cliff of which it forms almost a part has been the eyrie of the sea-eagles. When cured and released, it returned to be fed, and in time grew so familiar as to enter the house. The dining-room, as in many ancient Scotch houses, was at the top of the castle, with several windows looking out over the Atlantic. Breakfast was laid, and many of the guests were in the room, when an open window was suddenly darkened as the eagle flew in from the sea, and, folding its wings, alighted on the sill. It then flapped on to the table, and after looking at the guests standing in the room, it made its way down the table, and swallowed the butter, which was set for use at intervals down the board. For two years the eagle lived about the castle ; but its visits to the farmyards were not less frequent, and though " indemnity " for these outrages was freely paid, it is to be feared that the eagle's disappearance was due to a reprisal from an injured flock-owner. There is, however, good reason to believe that the golden eagle, which at one time seemed destined to extermination, is rapidly in- creasing in numbers. By a fortunate chance, its powers of destruction, which incurred the revenge of the shepherds and grouse-preservers, are of certain service to the deer-stalker by keeping down the numbers of mountain-hares which live on the hills, and often spoil the success of a hard morning's stalking by jumping up and alarming the deer. For once, the sportsman and a bird of prey can exist together, and the eagles are carefully protected in order that they may aid in keeping the forests clear of all other animals but deer. In these vast preserves—quiet, secluded, and untrodden by sheep or shepherds—the golden eagles arc now suffered to rear their young, and have so far increased in numbers that it is rare to meet with a deer-stalker who is not familiar with their appearance, and in some degree with their habits. They occasionally kill a sickly deer calf, and have been known to attack the full-grown deer. But their main food is the blue hares, and these are so numerous that the problem of maintaining in any numbers a carnivorous bird which will swallow five or six pounds of meat at a meal presents no difficulties. It is quite likely that, where several of these protected districts adjoin, the golden eagles will once more become numerous. In California, where these birds find an inexhaustible supply of food in the land-tortoises of the plains—a curious commentary on the story of the death of Aschylus, caused by a tortoise let fall by an eagle—they are not only common but exceedingly tame, building their nests near roads and houses. One nest was found in a small live-oak near a road, and only thirty feet from the ground, built of sticks of the poison-oak and sage-brush. An old neat was close by. Another eagle had decorated its nest with a large soap-root " by way of ornament ; and the next year the same bird built close by, and also procured a " soap-root " to place on the side of its nest, which showed some indi- viduality in taste. A third eagle had a fancy for sacks, and after its old nest, which contained a corn-sack, had been blown out by a storm, it built a fresh one close by, and in this was found another, and a new sack. The eagles seem to be, at any rate in some parts of California, almost as common as the kite was in England, and to have the same propensity for carrying to their nests any object which strikes them as ornamental or interesting. It is not to be supposed that, under the most favourable circumstances, the golden eagle will increase to such numbers in the Highlands. But there is every probability that, as its area extends in the North, some of its earlier breeding-places in the South, such as the Cheviots, the Peak of Derbyshire, or Westmoreland and Cumberland, where it nested as lately as 1838, may be revisited, and that we may before long see the golden eagle re-established in England.