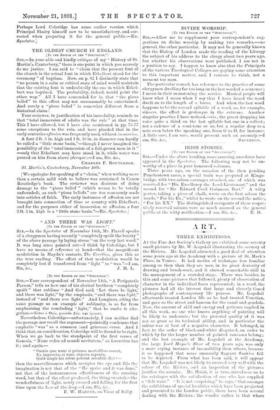 THE OLDEST CHURCH IN ENGLAND.

[To THE EDITOR OF THE " SPECTATOR."] Sin, In your able and kindly critique of my " History of St. Martin's, Canterbury," there is one point in which you scarcely do me justice. I am said to " claim that the present font of the church is the actual font in which Ethelbert stood for the ceremony " of baptism. Now, on p. 82 I distinctly state that ." no person in a calm or critical state of mind would maintain that the existing font is undoubtedly the one in which Ethel- bert was baptised. The probability, indeed, would point the other way." All I have contended for is, that " the pious belief " to this effect may not unreasonably be entertained. And surely a "pious belief" is somewhat different from a historical claim !

Your reviewer, in justification of his incredulity, reminds us that "total immersion of adults was the rule" at that time. This I have allowed, but I have also mentioned in pp. 75-77 some exceptions to the rule, and have pleaded that in the early centuries effusion was frequently used, without immersion.

A font 2 ft. 5 in. high and 1 ft. 10 in. in diameter can hardly be called a "little stone basin,"—though I never imagined the possibility of the " total immersion of a full-grown man in it " —only that Ethelbert may have stood in it, while water was poured on him from above (desuper).—I am, Sir, &c., CHARLES F. ROUTLEDGE. St. Martin's, Canterbury, November 10th.

[We apologise for speaking of a " claim," when nothing more than a certain mild wish to believe was contained in Canon Routledge's book. The reviewer was desirous of doing damage to the "pious belief " (which seems to be totally unfounded), as such "pious beliefs" are too commonly made into articles of faith. The early instances of affusion are not brought into connection of time or country with Ethelbert ; and for the purposes either of immersion or affusion, a font 2 ft. 5 in. high is a " little stone basin."—ED. Spectator.]