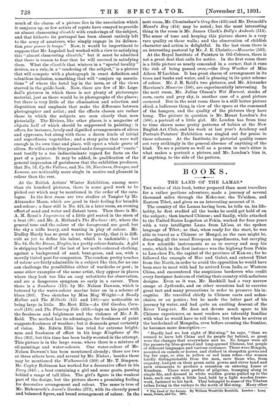 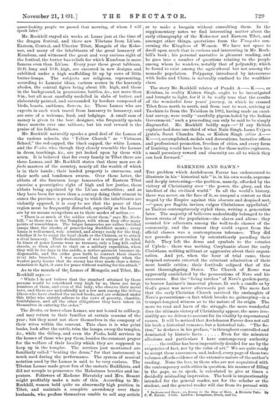 THE LAND OF THE LAMAS.*

THE writer of this book, better prepared than most travellers for a rather perilous adventure, made a journey of several

thousand miles through the Koko-nor, the Ts'aidam, and Eastern Tibet, and gives us an interesting account of it.

The country of the Lamas having been, he tells us, his life- hobby, he first studied all the books he could get hold of on the subject ; then learned Chinese ; and finally, while attached to the United States Legation at Pekin, worked for four years with a very intelligent Lama from Lh'asa at the spoken language of Tibet ; so that, when ready for the start, he was able to travel as a Chinese or Mongol, as the case might be, discarding all the usual European impedimenta, but carrying a few scientific instruments so as to survey and map his route, which in the first instance was the highway from Pekin to Lan-thou Fa, the capital of the province of Kan-su ; for he followed the example of Hue and Gabet, and entered Tibet from the North, in order to avoid the opposition he would have been sure to meet with had he arrived from India or Western China, and encountered the suspicious borderers who credit every foreigner desirous of visiting their country with nefarious designs. Even as it was, Mr. Rockhill had a very narrow escape at Jydkundo, and on other occasions had to exercise great tact and many precautions in order to preserve his in- cognito. He travelled chiefly in Chinese carts and sedan- chairs, or on ponies ; but he made the latter part of his journey by water, and had quite an exciting descent of the River Yang-tzu. He does not devote much space to his Chinese experiences, as most readers are tolerably familiar with what he would have to tell them ; but when be arrives at the borderland of Mongolia, even before crossing the frontier, he becomes more descriptive :—

"Hardly had we lost sight of Hsi-ning," he says, "than we seemed to have left China and its people far behind, so great were the changes that everywhere met us. No longer were all the passers-by blue-gowned and long-queued Chinese, but people of different languages and various costumes. There were Mongols, mounted on camels or horses and clothed in sheepskin gowns and big fur caps, or else in yellow or red lama robes—the women hardly distinguishable from the men, save those who, from coquetry, had put on their green satin gowns and silver head and neck ornaments to produce a sensation on entering Lusar or Kumbum. There were parties of pilgrims, tramping along in single file, and dressed in white woollen gowns pulled up to the knee, each one with a little load, held by a light wooden frame- work, fastened to his back. They belonged to some of the Tibetan tribes living in the valleys to the north of Hsi-ning. Many other

queer-looking people we passed that morning, of whom I will speak later."

Mr. Rockhill stayed six weeks at Lugar just at the time of the dragon festival, and there saw Tibetans from Lh'asa, Eastern, Central, and Ulterior Tibet, Mongols of the Koko- nor, and many of the inhabitants of the great lamasery of Kumbum, and witnessed the great and very curious sight of the festival, the butter bas-reliefs for which Kumbum is more famous even than Lh'asa. Every year these great tableaux, 20 ft. long and 10 ft. high, are executed in new designs, and exhibited under a high scaffolding lit up by rows of little butter-lamps. The subjects are religious, representing, according to Lamaist ideas, various scenes in the heavenly abodes, the central figure being about 3 ft. high, and those in the background, in processions, battles, &c., not more than 8 in., but all most carefully modelled in slabs of butter, and elaborately painted, and surrounded by borders composed of birds, beasts, emblems, flowers, &c. Those Lamas' who are experts in such work travel from lamasery to lamasery, and are sure of a welcome, food, and lodgings. A small sum of money is given to the best designer, who frequently spends three months over one tableau ; but his real reward is the praise of his fellows.

Mr. Rockhill naturally speaks a good deal of the Lamas of

the various schools, the " Yellow Church " or " Virtuous School," the red-capped, the black capped, the white Lamas, and the P6abo, who, though they closely resemble the Lamas

in dress, teachings, &c., are yet looked upon by them with scorn. It is believed that for every family in Tibet there are

three Lamas, and Mr. Rockhill states that these men are de facto masters of the country, nearly all the wealth of which is in their hands ; their landed property is enormous, and

their serfs and bondsmen swarm. Over these latter, the abbots of the fourteen large lamaseries of Eastern Tibet exercise a prescriptive right of high and low justice, these abbots being appointed by the Lh'asa. authorities ; and as they have been for more than a century doing their utmost to annex the province, a proceeding to which the inhabitants are violently opposed, it is easy to see that the peace of that region must be frequently disturbed, especially as the Lamas are by no means scrupulous as to their modes of action :-

"There is as much of the soldier about them," says Mr. Rock- hill, " as there was in the Templars, with whom they offer many points of resemblance. The larger lamaseries are rather fortified camps than the abodes of peace-loving Buddhist monks ; every Lama is well-armed, web- counted, and always ready for the fray, whether it be to resist the local chiefs or the Chinese, or to attack a rival lamasery. Their declaration of war is unique of its kind. In times of peace Lamas wear no trousers, only a long kilt called shantta, so when about to start on a military expedition, when they will be for days in the saddle, a nether-garment becomes in- dispensable, and the order goes forth to convert their shawls (sun) into breeches. I was assured that frequently when the weaker party learns that its enemy has thus made clear a deter- mination to fight, it sues for peace without waiting for the attack."

As to the morals of the Lamas of Mongolia and Tibet, Mr. Rockhill says:— "While I do not believe that the standard attained by those persons would be considered very high by us, there are large numbers of them, and even of the laity, who observe their moral laws, and there are undoubtedly not a few men among the Gdlong (those who have studied the sacred books, and are ordained under this title) who strictly adhere to the vows of poverty, chastity, truthfulness, and all the other obligations they have taken on themselves in entering the order."

The Draba, or lower-class Lamas, are not bound to celibacy, and may return to their families at certain seasons of the year ; but they must not show themselves in the company of their wives within the convent. This class it is who print books, look after the cattle, trim the lamps, sweep the temples, &c., while the Gelong, and even the Ponbo, hold services in the houses of those who pay them, besides the constant prayer

for the welfare of their locality which they are supposed to keep up in the temples. The services just mentioned are familiarly called " beating the drum," for that instrument is much used during the performance. The system of musical notation used by the Lamas is said to be very curious. The Tibetan Lamas made great fun of the esoteric Buddhists, and did not scruple to pronounce the Mahatmas heretics and im- postors. Followers of Madame Blavatsky and Mrs. Besant might profitably make a note of this. According to Mr. Rockhill, women hold quite an abnormally high position in Tibet, and maintain a complete ascendency over their husbands, who profess themselves unable to sell any article

or to make a bargain without consulting them. In the supplementary notes we find interesting matter about the early ethnography of the Koko-nor and Eastern Tibet, and amongst other things, quotations from the T'ang-sku con- cerning the Kingdom of Women. We have not space to dwell upon much that is curious and interesting in Mr. Rock- hill's book ; his personal narrative is pleasant reading, and he goes into a number of questions relating to the people among whom he wanders, notably that of polyandry, which he found to exist among the agricultural but not among the nomadic population. Polygamy, introduced by intercourse with India and China, is naturally confined to the wealthier class.

The story Mr. Roekhill relates of Pundit A— K—, or Krishna, in reality Kishen Singh, ought to be investigated and brought to light, for if it be really true that the results of the wonderful four years' journey, in which he crossed Tibet from north to south, and from east to west, arriving at Ta-chien-lu from the Ts'aidam in 1882, having made an excel- lent survey, were really "carefully pigeon-holed by the Indian Government," such a proceeding can only be said to be simply disgraceful. Mr. Rockhill boldly says :—" If any British explorer had done one-third of what Nain Singh, Lama Urjyen jyats'o, Sarat Chandra Das, or Kishen Singh (alias A- K—), accomplished, medals and decorations, lucrative offices and professional promotion, freedom of cities, and every form of lionising would have been his ; as for those native explorers, a small pecuniary reward and obscurity are all to which they can look forward."