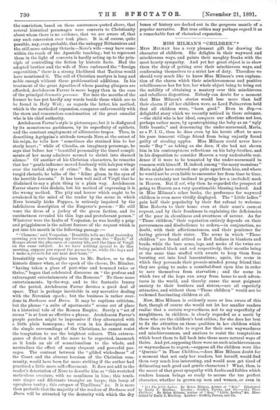 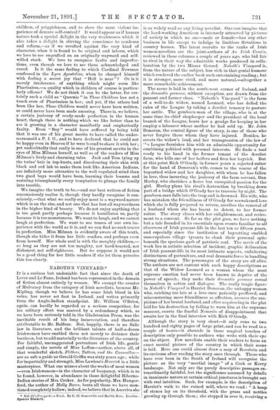 for drawing the character of children. She delights in their wayward and mischievous ways, and paints their naughty freaks with the most hearty sympathy. And yet her great object is to show them the duty of getting over their mischievous ways, and conforming themselves to a strict law of duty. Therefore we should very much like to know Miss Milman's own explana- tion of the charm which their mischievousness and positive rebelliousness has for her, her whole object being to bring out the nobility of obtaining a mastery over this mischievous and rebellious disposition. Nobody can doubt for a moment that Miss Milman's stories would lose more than half their charm if all her children were, as Lord Palmerston held that all children were, "born good." Even in Boy,—a delightful story which we recently noticed in these columns, —the child who is her ideal, conquers our affections not less, perhaps rather more, by apostrophising the baby as an " ugly little beastie," and denouncing the under-nursemaid, Maria, as a P. I. G., than he does even by his heroic effort to save his poor innocent village friend from being unjustly found guilty of stealing apples. Miss Milman could never have made " Boy " as taking as she does, if she had not shown him in his contemptuous reflections on his baby-brother, and in his disposition to consider Heaven a very undesirable resi- dence if it were to be tenanted by the under-nursemaid in common with himself. If, indeed, among " the many mansions" Maria might have entered one quite apart from him, and where he would not be even liable to encounter her from time to time, he was certainly not inclined to grudge her a (secluded) nook in Heaven. But if not, why then he regarded the prospect of going to Heaven as a very questionable blessing indeed. And in Miss Milman's other books, the preference for wayward children is even more vividly displayed. The "Little ladies " gain half their popularity by their flat refusal to welcome Miss Roberts to their home even at their aunt's earnest request, and by their frankness in explaining the deficiencies of the poor in cleanliness and sweetness of savour. As for "Those children," their reputation entirely depends on their perverseness and disobedience to orders,—in conjunction, no doubt, with their affeetionateness, and their penitence for having grieved their sister. The scene in which " Those children " are found attired as Red Indians in blankets and beads, while the bare arms, legs, and necks of the twins are being painted black and red respectively, their mouths being at the same time stuffed with sweets to keep them from bursting out into load lamentations ; again, the scene in which they persuade their prosaic-minded young friend that they are going to make a cannibal-feast upon him in order to save themselves from starvation ; and the scene in which two of the boys run away from home to seek adven- tures in the world, and thereby cause the most poignant anxiety to their brothers and sisters,—are all especially attractive, and without them " Those children" would not be reckoned fascinating children at all.

Now, Miss Milman is evidently more or less aware of this fact, though of course she would not let her smaller readers realise that a certain waywardness, not to say superfluity of naughtiness, in children, is clearly regarded as a merit by those who are the children's best critics ; for she does her best to fix the attention on those qualities in her children which show them to be liable to regret for their own waywardness and mischievousness, and anxious to resist the temptations which beset them to fall back into these more natural ways of theirs. And yet, supposing there were no such mischievousness or waywardness to regret,—suppose all the children were like " Queenie " in Those Children,—does Miss Milman doubt for a moment that not only her readers, but herself, would find them very much less interesting, and would soon get tired of delineating such good and gentle characters ? What, then, is the secret of that great sympathy with faults and foibles which renders human beings so ready to accuse the too perfect character, whether in grown-up men and women, or even in

children, of priggishness, and to show the most violent im- patience of demure self-control ? It would appear as if human nature took a special delight in the very weaknesses which it also takes a delight in stirring the conscience to condemn and reform,—as if we revolted against the very kind of character, when it is found to be original and inborn, which we love to see engrafted on an originally wayward and self- willed stock. We love to recognise faults and imperfec- tions, even though we love to see them acknowledged and cured. Is it the same feeling to which Cardinal Newman confessed in the Lyra Apostolica, when he charged himself with feeling a secret joy that "Hell is near " ? Or is it merely intolerance of anything which might seem like Pharisaism,—a quality which in children of course is particu- larly odious ? We do not think it can be the latter, for cer- tainly such a child as " Queenie " in Those Children has not a touch even of Pharisaism in her ; and yet, if the others had been like her, Those Children would never have been written, or could never have been made amusing. There is, we believe, a certain jealousy of ready-made perfection in the human heart, though there is nothing which we like better than to see it growing in a character manifestly and emphatically faulty. Even " Boy" would have suffered by being told that it was one of his great merits to have called the under- nursemaid a P. I. Gr., and to have declared that he could not be happy even in Heaven if he were bound to share it with her ; yet undoubtedly that really is one of his greatest merits in the eyes of Miss Milman herself, as well as of the readers of Miss Milman's lively and charming tales. Jack and Tom tying up the twins' hair in top-knots, and discolouring their skin with black and red ink to make them look like American Indians, are infinitely more attractive to the well regulated mind than two good boys would have been, learning their lessons and resisting triumphantly every temptation to plunge the family into trouble.

We imagine the truth to be,—and our best writers of fiction unconsciously realise it, though they hardly recognise it con- sciously,—that what we really enjoy most is a wayward nature which is on the rise, and not one that has lost all waywardness in the higher kind of beauty. We do not enjoy anything that is too good, partly perhaps because it humiliates us, partly because it is too monotonous. We want to laugh, and we cannot laugh at perfection. We want to see traces of our own im- patience with the world as it is, and we can find no such traces in perfection. Miss Milman is evidently aware of this truth, though she hides it from her little readers, and perhaps even from herself. Her whole soul is with the naughty children,— so long as they are not too naughty, not hard-hearted, not dishonest, not self-righteous. But we suppose it would not be a good thing for her little readers if she let them perceive this too clearly.