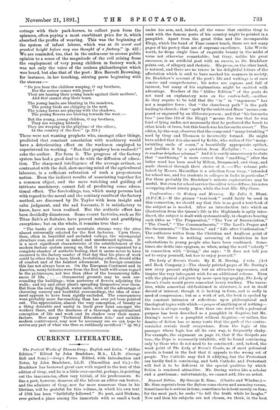 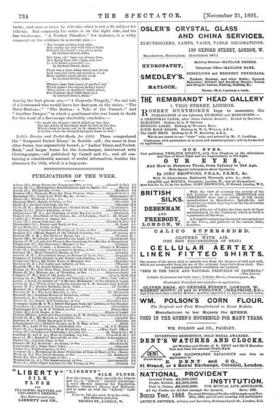 Dagonet Ditties. By George B. Sims. (Chatto and Windus.)— Mr.

Sims reprints from the Referee some clever and amusing verses, Sometimes he is serious in tone; sometimes he is bent merely on fun ; for the most part, he seeks " to tell the truth while he laughs." Now and then his subjects are not chosen, we think, in the best

taste ; and once or twice he ridicules what is not a fit subject for ridicule. But commonly his satire is on the right side, and his fun wholesome. "A Perfect Paradise," for instance, is a witty comment on the evidence in a recent case :-

May soothe his soul with Gilead balm Beneath the desert's one green palm In Gerrard Street, Soho.

There was a time when shout and shriek And song and oath and drunken freak Made matters lively all the week In Gerrard Street, Soho.

Whence came that sense of perfect rest • Which makes the region doubly blest? 'Twee when, as members' oaths attest, The Pelicans first built their nest In Gerrard Street, Soho."

Among the best pieces are,—" A Domestic Tragedy," the sad tale of a housemaid who would leave her dust-pan on the stairs; "The Shirt-Buttons;" "The Button : a Tale of the Tunnel;" and "Another Danger," in which a gentleman who was burnt to death for the want of a fire-escape charitably concludes :— .

"No doubt the disaster which killed me was dire, But the whole of the blame must be laid on the fire, Which chose to break out, to its shame be it said, At a time when the firemen bad gone home to bed."