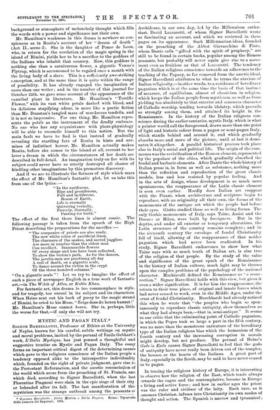 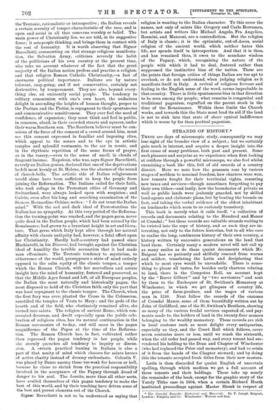 SIGNOR BARZELLOTTI, Professor of Ethics at the University of Naples, known for his careful, subtle writings on mystic and moral problems, incited by the perusal of Link Gebbart's work, L'Italie 2ifystique, has just penned a thoughtful and suggestive treatise on Mystic and Pagan Italy. The essay forms an important critical digest of the determining causes which gave to the religious conscience of the Italian people a tendency opposed alike to the introspective individuality which, founded on the right of private judgment, gave rise to the Protestant Reformation, and the ascetic renunciation of the world which arose from the preaching of St. Francis, anti which died, according to Signor Barzellotti, when the last Florentine Piagnoni were slain in the epic siege of their city or beheaded after its fall. The last manifestation of thin mysticism was the strange outbreak among the peasants 01 • Giacomo Barzellnfti : Italia Mistica Pa2ana. Roma : Tipogralla della Camera del Deputati. 1891.

Archidosso, in our own day, led by the Millennium enthu- siast, David Lazzaretti, of whom Signor Barzellotti wrote so fascinating an account, and which we reviewed in these pages on its appearance. Such Millennarian ideas, founded on the preaching of the Abbot Giovacchino di Fiore, whom Dante calls " gifted with the spirit of prophecy," are still to be found in certain books, popular among the Sienese peasants, but probably will never again give rise to a move- ment even as fruitless as that of Lazzaretti. The tendency of the Italian religious conscience towards an adherence to the

teaching of the Papacy, so far removed from the ascetic ideal, Signor Barzellotti attributes to what he terms the atavism of Italian religiosity,—in other words, to a residuum of hereditary paganism which is at the same time the basis of that instinct of measure, of equilibrium, almost of classicism in religion, which keeps the Italian people from mysticism, as well as from yielding too absolutely to that exterior and sensuous character of Catholic worship, tending towards idolatry, which prevails so strongly among them, and attained its height in the Renaissance. In the history of the Italian religious con- science during the earlier centuries, mystic Italy, which is what a painter would call the foreground, draws more than one point

of light and historic colour from a pagan or semi-pagan Italy, which stands behind and around it, and which gradually absorbs more and more of the picture, until at last it domi- nates it altogether. A parallel historical process took place also in Italy's social and political life. The origin of the com- munes was the revivification of the Roman element, represented by the populace of the cities, which gradually absorbed the feudal and barbaric elements. After Dante the whole history of Italian prose is, in form as well as substance, nothing more

than the reflection and reproduction of the great classic models, less and less resisted by popular feeling. And

in the arts of design, whose development is so much more spontaneous, the reappearance of the Latin classic element is seen even earlier. Hardly does Italian art reappear with the Pisani, when architecture and sculpture begin to reproduce, with an originality all their own, the forms of the monuments of the antique art which the people had before their eyes. Giotto studied these as well as living forms. The only Gothic monuments of Italy, says Taine, Assisi and the Duomo at Milan, were built by foreigners. But in the

depths, and under all exterior or temporary alterations, the Latin structure of the country remains complete ; and in the sixteenth century the envelope of feudal Christianity

fell of itself, allowing of the reappearance of that nobler paganism which had never been eradicated. In his study, Signor Barzellotti endeavours to show how what Taine says with so much truth of Italian art, is also true of the religion of that people. By the study of the value and significance of the great epoch of the Renaissance in the history of Italian culture, much light may be thrown

upon the complex problems of the psychology of the national character. Machiavelli defined the Renaissance as "a resur-

rection." Signor Barzellotti holds with this view, but gives it even a wider signification. It is for him the reappearance, the return to their true place, of original and innate forces which

had never ceased to work, even in the Middle Ages, under the crust of feudal Christianity. Burckhardt had already noticed this when he wrote that " the peoples who begin so spon- taneously to reproduce classic antiquity, show themselves as what they had always been,—that is, semi-antique." It seems to our critic that the culminating point of Catholic paganism, in which the Popes took so large a part in the fifth century, was no more than the monstrous caricature of the hereditary type of the Italian religious bias which the humanism of the fourth century and the increasing corruption in morals might develop, but not produce. The perusal of Heine's Gods in Exile causes Signor Barzellotti to feel that the gods of antiquity have never really been driven out of the temples, the houses, or the hearts of the Italians. A great part of Italy, especially in the South, may be said to have never ceased to be pagan.

In tracing the religious history of Europe, it is interesting to observe how the religion of the East, which tends always towards the vague and the contemplative, became in Europe a living and active force ; and how in earlier ages the priest .vas the ruler and civiliser of the laity. Each race, as it oeoomes Christian, infuses into Christianity its own modes of thought and action. The Spanish is narrow and tyrannical ;

the Teutonic, rationalistic or introspective ; the Italian reveals a certain serenity of temper characteristic of the race, and is open and social in all that concerns worship or belief. The main power of Christianity lies, we are told, in its suggestive force; it sets people thinking, and brings them in contact with the rest of humanity. It is worth observing that Signor Barzellotti, commenting on that strange religious manifesta- tion, the Salvation Army, criticises severely the habit of the politicians of his own country at the present time, who take no account whatever of the fact that the great majority of the Italian nation profess and practise a religion, and that religion Roman Catholic Christianity,—a fact of enormous political importance. Italians are by nature tolerant, easy-going, and if not conservative, certainly not destructive, by temperament. They are also, beyond every- thing else, an eminently social people. The tendency to solitary communion with one's own heart, the audacious delight in ascending the heights of human thought, proper to the Puritan and the Pietist, is repugnant to their spontaneous and communicative sensitiveness. They ever feel the need of confidence, of expansion ; they must think and feel in public, in common, aloud, in their crowded streets and squares, under their warm Southern sun. The Southern believer must be con- scious of the force of the consent of a crowd around him, must see this consent expressed in familiar and imposing rites, which appeal to the senses and to the eye in artistic temples and splendid vestments, to the ear in music, and in the rhythmic repetition of the same forms of prayer, as in the rosary,—even to the sense of smell, in clouds of fragrant incense. Napoleon, who was, says Signor Barzellotti, so truly an Italian genius, declared that one of the deprivations be felt most keenly at St. Helena, was the absence of the sound of church-bells. The artistic side of Italian religiousness would alone have been sufficient to keep the people from joining the Reformation. The Italians exiled for their faith, who took refuge in the Protestant cities of Germany and Switzerland, were always looked upon with suspicion ; and Calvin, even after his long and searching examination of the Sienese Bernardino Ochino, writes : " I do not trust the Italian mind." With the sad and dark ideal of Protestantism the Italian has no sympathy. At this very period of the Reforma- tion the turning-point was reached, and the pagan germ, never quite dead in the Italian people, which had been nursed by the Renaissance, had grown to a luxuriant height in art and litera- ture. That germ which Italy kept alive through her natural affinity with classic antiquity had, however, a fatal effect upon her Christianity. Hardly half-a-century had passed since Machiavelli, in his Discorsi, had brought against the Christian ideal of humility the terrible accusation that it had made man effeminate. The Teutonic tendency to mysticism, to abhorrence of the world, presupposes a state of mind entirely opposed to the calm equity of the classic temper, a temper which the Roman Church, with her marvellous and astute insight into the mind of humanity, fostered and preserved, so that the Middle Ages found and left, of all European peoples, the Italian the most naturally and historically pagan, the most disposed to hold of the Christian faith only the part that was least repugnant to the classic temper. The Church, when the first fury was over, planted the Cross in the Colosseum, sanctified the temples of Vesta to Mary ; and the gods of the hearth and of the field, who obstinately remained alive, she turned into saints. The religion of ancient Rome, which con- secrated decorum, and dwelt especially upon the public cele- bration of religious rites, has its natural continuation in the Roman ceremonies of to-day, and still more in the pagan magnificence of the Popes at the time of the Reforma- tion. The Roman Church has, in fact, cultivated rather than repressed the pagan tendency in her people, while she sternly quenches all tendency to inquiry or discus- sion. A certain practical leaning in Italians is also a part of that sanity of mind which chooses for saints heroes of active charity instead of dreamy enthusiasts. Celestin V. was placed by Dante among those too weak for heaven or hell, because he chose to shrink from the practical responsibility involved in the acceptance of the Papacy through dread of danger to his soul. The Jesuits, more than all other sects, have availed themselves of this pagan tendency to make the best of this world, and by their teaching have driven some of the best and purest elements out of the Church.

Signer Barzellotti is not to be understood as saying that religion is wanting to the Italian character. To this error the names, not only of saints like Gregory and Carlo Borromeo, but artists and writers like Michael Angelo, Fra Angelico, Rosmini, and Manzoni, are a contradiction. But the religion of Italy is classic ; it is the optimistic, out-of-doors, social religion of the ancient world, which neither bates this life, nor spends itself in introspection. And that it is thus, and has remained thus, it owes to the mundane wisdom of the Papacy, which, recognising the nature of the people with which it had to deal, fostered rather than suppressed the instinctive bias of the nation. These are the points that foreign critics of things Italian are too apt to overlook, or do not understand, when judging religion as it manifests itself in Italy. A revival of religious fervour and feeling in the English sense of the word, seems improbable in that country. There is little spontaneous bias in that direction to be seen among the people ; what remains is congenital and traditional paganism, regrafted on the parent stock in the time of the Renaissance. Within these limits the Church works, and towards this the State must lend its aid if the land is not to sink into that state of sheer cynical indifference which is worse by far than poetical paganism.