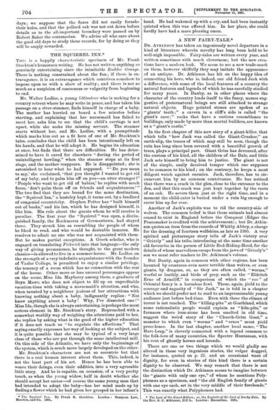 Da. ATKINSON has taken an ingeniously novel departure in a kind of literature wherein novelty has long been held to be well-nigh impossible. Fairy-tales are written every year, and written sometimes with much cleverness; but the new crea- tions have a modern look. We seem to see a new trade-mark on them, however skilfully they may imitate the appearance of an antique. Dr. Atkinson has hit on the happy idea of connecting his hero, who is, indeed, our old friend Jack with a difference, with some of the local features of a country the natural features and legends of which he has carefully studied for many years. In Danby, as in other places where the character of the country lends itself to the fancy, names sug- gestive of preternatural beings are still attached to strange natural objects. Huge pointed stones are spoken of as " giants' teeth ;" a cavern in a cliff's side is called " the giant's cave ;" rocks that have a curious resemblance to buildings, only made by more than mortal builders, are known as a " giant's castle."

In the first chapter of this new story of a giant-killer, that which tells " how Jack was called the Giant-Crasher," an earth-slip, the traces of which may still be seen, though the ruin has long since been covered with a beautiful growth of trees, plays a principal part. Giant Grim has devoured, after the custom of his kind, all the children of the Dale, and little Jack sets himself to bring him to justice. The giant is not of the simple, easily deceived temper which one supposes to be common to his kind ; on the contrary, he keeps a most diligent watch against enemies. Jack, therefore, has to cir- cumvent him by no common contrivance. He has noticed that there was a crack in the glen, close to the entrance to the den, and that this crack was just kept together by the roots of an oak. He severs them just at the right time, and in a moment the child-eater is buried under a ruin big enough to cover him up for ever.

Another of Jack's exploits was to rid the country-side of wolves. The common belief is that these animals had almost ceased to exist in England before the Conquest (Edgar the Peacemaker is credited with the achievement) ; but Dr. Atkin- son quotes an item from the records of Whitby Abbey, a charge for the dressing of fourteen wolf skins, as late as 1395. A very spirited and picturesque story tells of Jack's victory over " Grizzly" and his tribe, introducing at the same time another old favourite in the person of Little Red-Riding-Hood, for the details of whose marvellous escape from the jaws of "Grizzly's" son we must refer readers to Dr. Atkinson's volume.

But Danby, again in common with other regions, has been haunted by creatures even more terrible than wolves, or even giants, by dragons, or, as they are often called, worms," woeful or loathly, and birds of prey, such as the "Eldritch Erne of Arncliff," in comparison of which the " roc " of Oriental fancy is a harmless fowl. These, again, yield to the courage and sagacity of " Sir Jack," as is told in a chapter which we should prefer not to read to an impressionable young audience just before bed-time. Even with these the climax of terror is not reached. The " killing-pits" at Goathland, which some rationalistic people would explain as " kiln-pits," or furnaces where iron-stone has been smelted in old time, suggest the weird story of the " Church-Grim Goat," a monster to which even " worms " and " ernes " must yield precedence. In the last chapter, another local name, " The Hart-Leap," is cleverly connected with a legend common to the folk-lore of many countries, the Spectre Huntsman, with his rout of ghostly horses and hounds.

There are one or two things which we would gladly see altered in these very ingenious stories, the vulgar doggrel, for instance, quoted on p. 21, and an occasional want of dignity, for even in stories of this kind there is a certain dignity to be observed. We may remark that there is not the distinction which Dr. Atkinson seems to imagine between the "giants with only one eye," of whom he mentions Poly- phemus as a specimen, and "the old English family of giants with one eye each, set in the very middle of their foreheads," This was exactly what Polyphemus had.