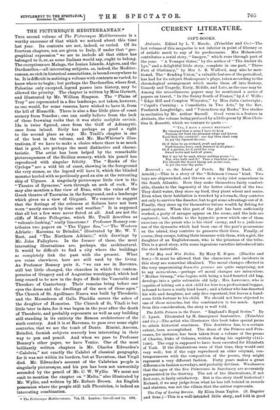 The Little Princes in the Tower. " England's Royal Series."

By C. Lysah. Illustrated by M. Smargiassi Santantico. (Trischler and Co.)—The artist who illustrates this book takes special pains to attain historical exactness. This doubtless has, to a certain extent, been accomplished. The dress of the Princes and Prin- cesses, for instance, has been taken from a volume of the poems of Charles, Duke of Orleans, written during his captivity (1415- 1440). The copy is supposed to have been executed for Elizabeth of York. If the illustrations were of that time, they would suit very well ; but if the copy reproduced an older original, con- temporaneous with the composition of the poems, they might represent a very different fashion. Forty years makes a great difference in fashion nowadays, and probably did then. We observe that the ages of the five Princesses in Sanctuary are accurately represented in the drawing. The art of the illustrations, if not first-rate, is fairly satisfactory. But is the story itself historical Richard, if we may judge from what he has left behind in records and statutes, was not the villain that the author represents.