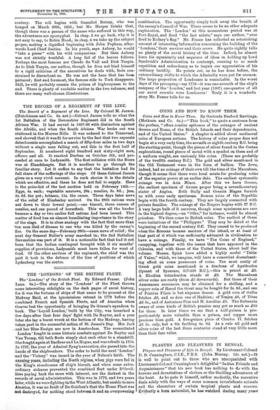 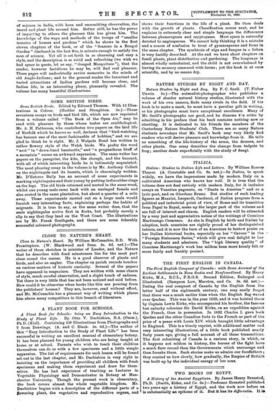 PLAGUES AND PLEASURES IN BENGAL.

Plagues and Pleasures of Life in Bengal. By Lieutenant-Colonel D. D. Cunningham, C.I.E., F.R.S. (John Murray. 12s. net.)—It is well to point out to those who are unacquainted with Lieutenant-Colonel Cunningham's delightful "Indian Friends and Acquaintances" that his new book has nothing to do with the horrors and devastations of cholera or the thrilling adventures of the hunt. As he puts it himself, rather modestly, the narrative deals solely with the ways of some common invertebrate animals and the characters of certain tropical plants and seasons. gvidently a born naturalist, he has watched during many years

of sojourn in India, with keen and unremitting observation, the insect and plant life around him. Better still, he has the power of imparting to others the pleasure this has given him. The knowledge of the ways and methods of the troops of "smaller inmates of houses and gardens" which he shows in the first eleven chapters of the book, or of the "Seasons in a Bengal Garden" disclosed in the last five, is minute enough to satisfy the man of science. Yet all is set forth in so charming and easy a style, and the description is so vivid and refreshing (we wish we had space to quote, let us say, "Gorged Mosquitoes "), that the reader, however fastidious he may be, will find real pleasure. These pages will undoubtedly revive memories in the minds of old Anglo-Indians ; and to the general reader the luxuriant and varied attractions of Indian gardens will become clear, and Indian life, in an interesting phase, pleasantly revealed. The volume has many beautiful illustrations.