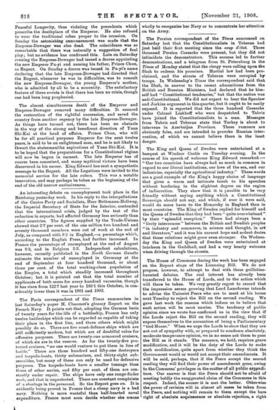 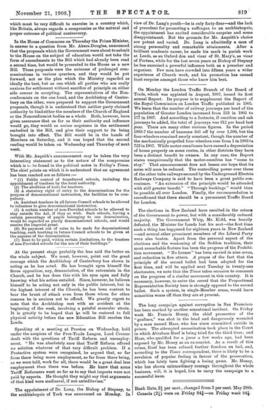 Page 18, 21 November 1908 — The House of Commons during the week has been engaged
Close

The House of Commons during the week has been engaged

on the Report stage of the Licensing Bill. We do not propose, however, to attempt to deal with these guillotine- haunted debates. The real interest has already been transferred to the House of Lords, and to the action which will there be taken. We very greatly regret to record that the impression seems growing that Lord Lansdowne intends to advise the Unionist Peers who are to meet at his house next Tuesday to reject the Bill on the second reading. We gave last week the reasons which induce us to believe that such action will be most unwise. The tendency of public opinion since we wrote has confirmed us in the view that if the Lords reject the Bill on the second reading, they will expose themselves to the accusation of being a Parliamentary "tied House." When we urge the Lords to show that they are not out of sympathy with, or prepared to condemn absolutely, moderate temperance opinion, we in no sense ask them to pass the Bill as it stands. The measure, we hold, requires grave modification, and it will be the duty of the Lords to make such modification, quite apart from whether they think the Government would or would not accept their amendments. It will be said, perhaps, that if the Peers accept the second reading they will find their power of amendment gone, owing to the Commons' privileges in the matter of all public expondi- tut*. Our answer is that the Peers should not be afraid of meeting boldly the exaggerated claim of the Commons in this respect. Indeed, the sooner it is met the better. Otherwise the power of revision will in almost all cases be taken from the Peers, and nothing will remain to them except the bare right of absolute acquiescence or absolute rejection, a right

which must be very difficult to exercise in a country which, like Britain, always regards a compromise as the natural and proper outcome of political controversy.