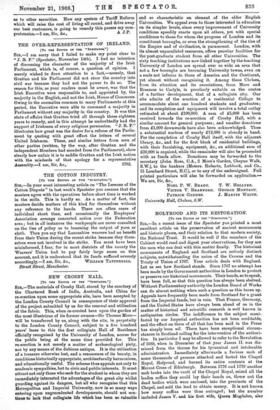 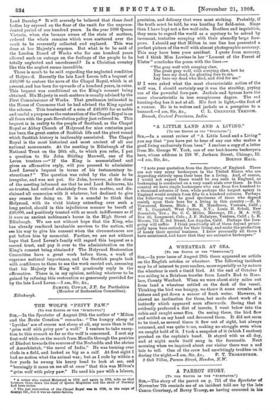 HOLYROOD AND ITS RESTORATION.

[To THE EDITOR OF THE "SPECTATOR.")

Sin,—In a recent issue of the Spectator you printed a most excellent article on the preservation of ancient monuments and historic places, and their relation to that modern society, the National Trust. It would be well if the members of the Cabinet would read and digest your observations, for they are the men who can deal with this matter finally. The historical monuments of England and Scotland are entirely distinct subjects, notwithstanding the union of the Crowns and the Treaty of Union of 1707. Your article deals with England. Let us see how Scotland stands. Since 1707 no attempt has been made by the Government authorities in London to protect or preserve our historical monuments. Their hands, so to speak, have been full, so that this question has always been shelved. Without Parliamentary authority the London Board of Works can do almost nothing when such a question as this turns up. Appeals have frequently been made from Scotland for a grant from the Imperial funds, but in vain. That France, Germany, and the United States have always been ahead of us in the matter of historical and scientific research is well known in antiquarian circles. The indifference to the subject mani- fested by our Imperial authorities has not been creditable, and the effect on them of all that has been said in the Press has simply been nil. There have been exceptional circum- stances in Scotland calling for the intervention of the authori- ties. In particular I may be allowed to refer to the Revolution of 1688, when in December of that year James II. was dis- missed from the throne for his tyrannical and intolerable administration. Immediately afterwards a furious mob of some thousands of persons attacked and looted the Chapel Royal, Holyrood, and burned its entire contents at the Mercat Cross of Edinburgh. Between 1776 and 1779 another mob broke into the vault of the Chapel Royal, seized all the leaden coffins they could lay their hands on, threw out the dead bodies which were enclosed, into the precincts of the Chapel, and sold the lead to obtain money. It is not known bow many coffins were thus outraged ; but the number included James V. and his first wife, Queen Magdalen, also

Lord Darnley.* It will scarcely be believed that these dead bodies lay exposed on the floor of the vault for the unprece- dented period of one hundred years. In the year 1888 Queen Victoria, when she became aware of the state of matters, ordered the whole remains which were scattered over the vault to be reverently collected and replaced. This was done at her Majesty's expense. But what is to be said of the London Board of Works who for one hundred years allowed such an outrage on the feelings of the people to be totally neglected and unredressed ? In a Christian country like this the neglect seems incredible.

There is much to be said regarding the neglected condition

of Holyrood. Recently the late Lord Leven left a bequest of £40,000 to restore the nave of the Chapel Royal, which is at present, and has been for upwards of a hundred years, in ruins. This bequest was conditional on the King's consent being obtained. His Majesty in such matters is usually advised by the First Commissioner of Works. That gentleman intimated in the House of Commons that he bad advised the King against the scheme. This treatment of a sum of 240,000 for so noble and useful a purpose as the restoration of the Chapel Royal is on all fours with the post-Revolution policy just referred to. This bequest is in reality to the people of Scotland, as the Chapel Royal or Abbey Church of Holyrood for nine centuries past has been the great centre of Scottish life and the pivot round which Scottish history is inalienably associated. The Chapel Royal is the most historical and most ancient of all our national monuments. At the meeting in Edinburgh of the National Trust on the 26th ult., to which you refer, I put a question to Sir John Stirling Maxwell, one of the Leven trustees :—" If the King is memorialised and gives an affirmative reply, will you proceed to administer Lord Leven's bequest in terms of his testamentary in- structions P" The question was ruled by the chair to be irregular, and was not put. Sir John, however, at the close of the meeting informed me that he and Lord Balcarres, his co-trustee, had retired absolutely from this matter, and dis- claimed all connexion with it whatever, but declined to give any reason for doing so. It is a scandal to think that Holyrood, with its vivid history extending over such a long period, should in this injudicious manner be bereft of 240,000, and positively treated with as much indifference as if it were an ancient nobleman's house in the High Street of Edinburgh. We are not without hope that the King, who has already rendered invaluable services to the nation, will see his way to give his consent when the circumstances are put before him by memorial. Farther, we are not without hope that Lord Leven's family will regard this bequest as a sacred trust, and pay it over to the administration on the King's consent being obtained.t The Holyrood Restoration Committee have a great work before them, a work of supreme national importance, and the Scottish people look with confidence to them to see the work carried out, assuming that his Majesty the King will graciously reply in the affirmative. There is, in my opinion, nothing whatever to be gained by refusing this restoration so generously provided for by the late Lord Leven.—I am, Sir, &c.,