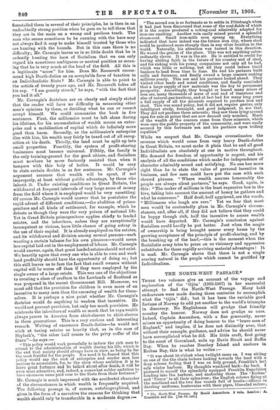 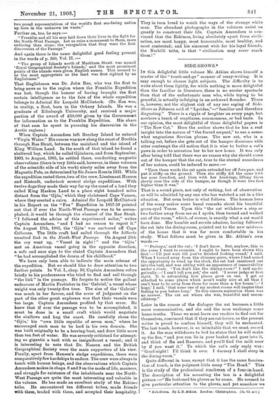 attempt to find the North-West Passage. Many bold endeavours were made during three centuries to accomplish what the Gjoa ' did ; but it has been the enviable good fortune of Norway to add yet another to the world's triumphs. in discovery. No Englishman will grudge that friendly country the honour. Norway does not grudge us ours. Indeed, Captain Amundsen, with a fine generosity, never' misses an opportunity of doing honour to the "brave men of England," and implies, if he does not distinctly aver, that without their example, guidance, and advice he should never have accomplished what he did. His little craft, first going' to the coast of Greenland, sails up Davis Strait and Baffin, Bay. When he reaches Beechey Island and anchors in Erebus Bay, this is what he writes :—

"It was about 10 o'clock when twilight came on. I was sitting' on one of the the chain lockers looking towards the land with a deep solemn feeling that I was on holy ground, Franklin's last safe winter harbour. My thoughts wandered back—far back. I pictured to myself the splendidly equipped Franklin Expedition heading into the harbour, and anchoring there. The 'Erebus' and Terror' in all their splendour; the English colours flying at the masthead and the two fine vessels full of bustle—officers in dazzling uniforms, boatswains with their pipes, blue-clad sailors; • The North-West Passage. Ny Road Amundsen. 2 vole. London: A., Constable and Co. Una 6d. net.] two proud representatives of the world's first sea-faring nation up here in the unknown ioe waste."

"Franklin and all his men laid down their lives in the fight for the North-West Passage. Let us raise a monument to them, mere enduring than stone: the recognition that they were the first discoverers of the Passage."

And again there is the same delightful good feeling present in the words of p. 360, Vol. II. :— "The group of Islands north of Markham Strait was named 'Royal Geographical Society's Islands,' and the most prominent points of the islands were given English names. This seemed to us the most appropriate as the land was first sighted by an Englishman."

That Englishman was Dr. John Rae, who was the first to bring news as to the region where the Franklin Expedition was lost, though the honour of having brought the first certain intelligence as to the fate of the whole expedition

belongs to Admiral Sir Leopold McClintock. (Dr. Rae was, in reality, a Scot, born in the Orkney Islands. He was a graduate of Edinburgh University, and received a major

portion of the award of £10,000 given by the Government for information as to the Franklin Expedition. His share of that sum he spent in pursuing his discoveries in the Arctic regions.) When Captain Amundsen left Beechey Island he entered "Virgin Water." His course was now along the coast of Boothia through Rae Strait, between the mainland and the island of Sing William Land. In the south of that island he found a

sheltered bay, which he called Gjoahavn, and from September. 1903, to August, 1905, he settled there, conducting magnetic observations (there is very little said, however, in these volumes of the scientific side of his work) ninety miles away from the Magnetic Pole, as determined by Sir James Ross in 1831. While the expedition rested there, two of the crew, Lieutenant Hansen

and Ristredt, undertook several sledge expeditions. With twelve dogs they made their way far up the coast of a land they called King Haakon Land to a place eight hundred miles distant from the Gj5a,' which they christened Cape Vansen, where they erected a cairn. Admiral Sir Leopold McClintock in his Report on the "Fox" Expedition in 1857-59 pointed out that if ever the North-West Passage was to be accom- plished, it would be through the channel of the Rae Strait. " I followed the advice of this experienced sailor," writes Captain Amundsen, "and I had no reason to regret it."

Colborne. The little craft had sailed through the hitherto unsolved link in the North-West Passage. On August 26th the cry went up, "Vessel in sight!" and the Gjoa met an American vessel going in the opposite direction, a safe and sure sign to the elated Captain Amundsen that "he had accomplished the dream of his childhood."

We have only been able to indicate the main scheme of the expedition. But we should like to draw attention to two further points In Vol. I., chap. 10, Captain Amundsen refers briefly to his predecessors who tried to find and sail through "the link" in the passage. He forgets to notice the gallant

endeavour of Martin Frobisher in the' Gabriel,' a vessel whose weight was only twenty-five tons. The size of the Gabriel'

was much in her favour, and the error of judgment on the part of the other great explorers was that their vessels were too large. Captain Amundsen profited by that error. He knew that if ever the passage was to be accomplished, it must be done in a small craft which would negotiate the shallows and bug the coast. He carefully chose the Gjoa,' his "own little republic of seven men," where he encouraged each man to be lord iu his own domain. She was built originally to be a herring-boat, and drew little more than ten feet of water. He was severely criticised for attempt- ing so gigantic a task with so insignificant a vessel; and it is interesting to note that Dr. Nansen and the British Geographical Society were the main supporters of his view.

Finally, apart from Hansen's sledge expeditions, there were comparatively few hardships to endure. The crew were always in

touch with human beings, and the observations which Captain Amundsen makes in chaps. 8 and 9 on the mode of life, manners, and struggle for existence of the inhabitants near the North-

West Passage are quite the most interesting and valuable in the volume. He has made an excellent study of the Eskimo tribe. He encountered ten different tribes, made friends with them, traded with them, and accepted their hospitality.

They in turn loved to watch the ways of the strange white man. The abundant photographs in the volumes assist us greatly to construct their life. Captain Amundsen is con- vinced that the Eskimos, living absolutely apart from civili- sation, are most happy, most honourable, most healthy, and most contented; and his sincerest wish for his loyal friends, the Nechilli tribe, is that " civilisation may never reach them !"