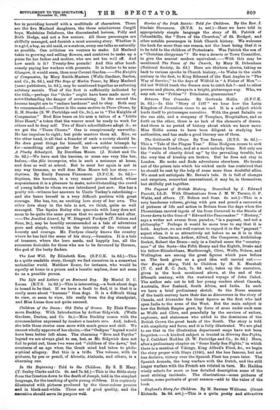 The Pageant of British History. Described by j. Edward Parrott,

LL.D. With Illustrations from J. M. W. Turner, G. F. Watts, and others. (T. Nelson and Sons. 6s. net.)—This is a very handsome volume, giving with pen and pencil a succession of pictures of life and action in Britain from the days when the Phoenicians carried ingots of tin from Cornwall to the Straits of Dover down to the time of "Edward the Peacemaker." "History," says a writer not averse from paradox, "is a pageant, and not a philosophy." Perhaps it would be more true to say that it is both. Anyhow, we are well content to regard it. in the "pageant" aspect when it is so attractively set before us as it is in this volume. Caractacus, Arthur, Alfred, the Conqueror, Archbishop Becket, Robert the Bruce—only in a limited sense the " country- man " of the Scots—the Fifth Henry and the Eighth, Drake and his fellow-Elizabethans, Marlborough, Clive, Wolfe, Nelson, and Wellington are among the great figures which pass before us. The book gives us a good idea well carried out.— Our Empire Story, Told to Children by H. E. Marshall (T. C. and E. C. Jack, 7s. 6d. net), takes up the narrative, given in the book mentioned above, at the end of the fifteenth century, with the westward voyage of John Cabot. The author sets out to tell her young readers about Canada, Australia, New Zealand, South Africa, and India. In each we have a brief preliminary sketch. So the Norse seamen of the tenth century have their due as discoverers in the story of Canada, and Alexander the Great figures as the first who laid open India to the arms of the West. But the main subject is how the British Empire grew, by force of arms under such men as Wolfe and Clive, and peacefully by the services of sailors, explorers, and statesman who added to the dominions of the British Crown the great lands of the South. The story is told with simplicity and force, and it is fully illustrated. We are glad to see that in the illustration department maps have not been forgotten.—A kindred subject is treated in Stirring Sea-Fights, by J. Cuthbert Haddon (S. W. Partridge and Co., 2s. 6d.) Here, after a preliminary chapter on "Some Early Sea-Fights," in which there is a mention of Vikings, King Alfred's Fleet, &c., we begin the story proper with Sluys (1340), and the less famous, but not less decisive, victory over the Spanish Fleet ten years later. The Spanish Armada, the long warfare with the Dutch, and the still longer warfare with the French are related in turn. Mr. Hadden wisely selects for more or less detailed description some of the most striking incidents. The illustrations—some pictures of battles, some portraits of great seamen—add to the value of the book.