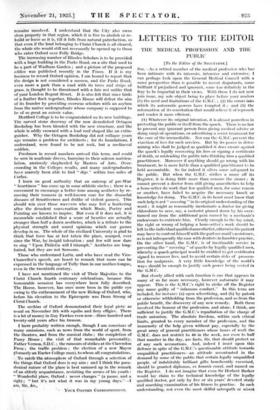 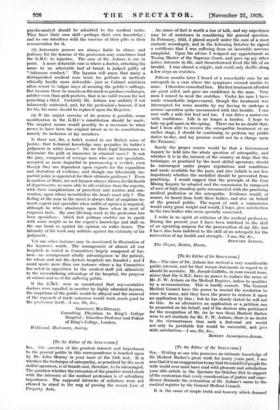 THE MEDICAL PROFESSION AND THE PUBLIC

[To the Editor of the SPECTATOR.] Sia,—As a retired member of the medical profession who has been intimate with its interests, intensive and extensive, I can perhaps look upon the General Medical Council with a surer perspective than is possible to recent disputants, some brilliant if prejudiced and ignorant, some too definitely in the fray to be impartial in their views. With these I do not now join issue, my sole object being to place before your readers (1) the need and limitations of the G.M.C. ; (2) the errors into which its autocratic powers have tempted it ; and (8) the reformation of its consitution that would relieve it of reproach and render it more efficient.

(1) Whatever its original intention, it is almost powerless in protecting the public or itself from the quack. There is no law to prevent any ignorant person from giving medical advice or doing surgical operations, or advertising a secret treatment for the cure of the irremediable. Nor can the G.M.C. prevent the exaction of fees for such services. But by its power in deter- mining who shall be judged as qualified it does ensure against the quack's legally recovering his fees or signing a certificate of death, or misleading the public into thinking him a qualified practitioner. Moreover if anything should go wrong with his treatment, he is more liable than a qualified practitioner to be held accountable. So far indeed it offers some safeguard, to the public. But when the G.M.C. strikes a name off its Register, it is doing little more than censure the sinner ; it cannot prevent a doctor from still giving anaesthetics to help a bone-setter do work that few qualified men, for some reason or another, have failed to acquire the necessary knack or knowledge for doing. The G.M.C. in its heart must know that such help is not " covering " in its original understanding of the word ; it might as reasonably incriminate a doctor for giving chloroform to save, say, a motorist pinned down by his over- turned car from the additional pain caused by a mechanic's endeavours to extricate him. Clearly enough to the lay mind, the right or wrong of helping a bone-setter's work should be left to the individual qualified anaesthetist, otherwise the patient may have to content himself with the parlour-maid's assistance, as is not infrequently the case with dentists in humbler practice. On the other hand, the G.M.C. is of inestimable service in preventing the " covering " of quacks by legally qualified men, whereby a quack-principal would be enabled to get certificates signed to recover fees, and to avoid certain risks of prosecu- tion for malpraxis. A very little knowledge of the world's ways should be enough to justify such power being vested in the G.M.C.

But closely allied with such function is one that appears to many of us far more necessary, however autocratic it may appear. This is the G.M.C.'s right to strike off the Register any name guilty of " infamous conduct." In this term are included, for instancz (a) open advertising, and (b) by patent Or otherwise withholding from the profession, and so froni the public benefit, the discoVery Of any new remedy. Both these involved the honour of the profession, and alone, I think, are sufficient to justify the G.M.C.'s repudiation of the charge of trade unionism. The absolute freedom, within such ethical limits, granted to every member of the profession, and the immensity of the help given without pay, especially by the great army of general practitioners whose hours of work the G.M.C. does not restrict to 48 in the week, nor even to half that number in the day, are facts, Sir, that should protect us of any such accusations. And, indeed I insist upon this defence in spite of the G.M.C.'s questionable attitude towards unqualified practitioners—an attitude accentuated in the demand by some of the public that certain legally unqualified people, of indubitably brilliant gifts beneficently exercised, should be granted diplomas, ex honoris eausd, and named on the Register. I do not imagine that even Sir Herbert Barker would lay claim to the technical knowledge of the legally qualified doctor, got only by five or six years' devoted study and searching examination of his fitness to practise. In such understanding, not even the most skilful osteopath Or wisest psycho-analyst should be admitted to the medical ranks. They have their own skill—perhaps their own knowledge.; and no one interferes with the exercise of their gifts or their remuneration for it.

(2) Autocratic powers are always liable to abuse, and jealousy for the honour of the profession may sometimes lead the G.M.C. to injustice. The case. of Dr. Axham is one in point. A more debatable case is where a doctor, attaching his name to an admirable loaf of bread, is judged guilty of " infamous conduct." The layman will argue that many a distinguished medical man touts for patients in methods ethically hardly more defensible—just as Cabinet ministers often resort to vulgar ways of securing the public's suffrage. But because there be rascals on thestock or produce exchanges, subtler even than pick-pockets, that is no valid reason for not punishing a thief. Certainly Dr. Axham was unfairly if not infamously entreated, and, for the profession's honour, if not for his, his name should be replaced upon the Register.

(3) If the unjust exercise of its powers is possible, some modification in the G.M.C.'s constitution should be made. The simplest means would possibly be a reversion to what seems to have been the original intent as to its constitution, namely its inclusion of lay members.

Is there not, Sir, a belief, rooted in our British sense of justice, that technical knowledge may prejudice its holder's judgment in wider issues ? Do we trust legal luminaries to determine the guilt or innocence in criminal cases ? Is not the jury, composed of average men who are not specialists, accepted as more impartial in pronouncing a verdict, even though they are dependent upon experts for the exposition and distortion of evidence, and though one laboriously im- partial judge is appointed for their ultimate guidance ? Even in matters of State, are not laymen always chosen for the heads of departments, as more able to sift evidence than the experts, with their complications of precedent and routine and con- vention, upon whom nevertheless the heads must rely ? The feeling of the man in the street is always that of suspicion to- wards expert and specialist when width of opinion is required, although he relies absolutely upon these when in need of exiguous facts. My own life-long work in the profession has been specialism ; which fact perhaps enables me to speak with some weight as to the expert's knowledge and skill on the one hand as against his opinion on wider issues. The intensity of his work may militate against the extensity of his judgment.

Yet one other instance may be mentioned in illustration of the laymen's worth. The management of almost all our hospitals is vested in Committees largely composed of lay- men—an arrangement wholly advantageous to the patient, for whom and not the doctors hospitals are founded ; and I could quote more than one instance where a lay Committee has acted in opposition to the medical staff yet ultimately to the overwhelming advantage of the hospital, the progress of science and so of the suffering public.

If the G.11.C. were so constituted that representative doctors were equalled in number by highly educated laymen, the suspicions of the public would be allayed and the removal of the reproach of trade unionism would work much good to the profession itself.—I am, Sir, &e.,