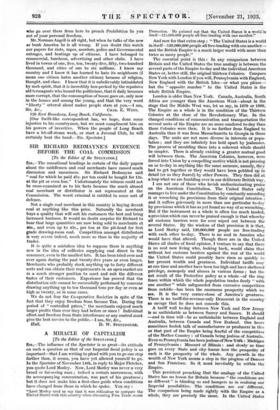 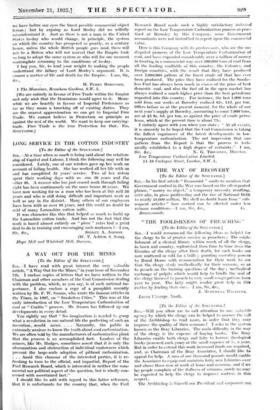 A MIRACLE OF CAPITALISM [To the Editor of the SPECTATOR.]

Sus,—The influence of the Spectator is so great—its attitude on such a question as that of our Imperial fiscal policy is so important—that I am writing to plead with you to go one step farther than, it seems, you have yet allowed yourself to go. In the Spectator of November 14th, in reply to Major Fletcher, you quote Lord Morley. Now, Lord Morley was never a very broad or far-seeing man ; indeed a certain narrowness, with its accompanying concentration, was part of his greatness ; but it does not .make him a first-class guide when conditions have changed from those in which he spoke. You say : "Lord Morley used to say that it was ridiculous to compare the United States with this country when discussing Free Trade versus Protection. He pointed out that the United States is a world in itself-12J,000,000 people all free-trading with one another."

And now for that extra step : " The United States is a world in itself-120,000,000 people all free-trading with one another— and the British Empire is a much larger world with more than twice as many people."

The essential point is this : In any comparison between Britain and the United States the true analogy is between the several parts of the Empire to-day and the individual American States or, better still, the original thirteen Colonies. Compare New York with London if you will, Pennsylvania with England, New England with the British Isles—or what you please— but the " opposite -number " to the United States is the whole British Empire.

London is older than New York. Canada, Australia, South Africa are younger than the American West—about in the stage that the Middle West was, let us say, in 1870 or 1880. The Empire as a whole is in the condition of the Thirteen Colonies at the close of the Revolutionary War.. In the changed conditions of communication and transportation the several units of the Empire are no more sundered to-day than those Colonies were then. It is no farther from England to. Australia than it was from Massachusetts to Georgia in those days. The units are not more diverse in interests or popu- lation ; and they are infinitely less held apart by jealousies. The process of moulding them into a coherent whole should be simpler. There is already existing a greater mutual good will between them. The American Colonies, however, were forced into Union by a compelling motive whiCh is not pressing on us to-day in anything like the same measure, namely, they had to get together or they would have been gobbled up in detail (or so they feared) by other Powers. They then did at a leap what we are fumbling over in our deliberate British way., I am not one of those who lavish undiscriminating praise on the American Constitution. The United States only manages to live under the Constitution by constantly amending. it or wrenching its provisions from their original intention ; and it suffers grievously in more than one particular to-day by provisions which it has as yet found no way of so wrenching. But if the instrument as a whole is often too much lauded, a provision which can never be praised enough is that whereby all customs barriers were for ever wiped out between the several States. By the wisdom of that provision it is that, as Lord Morley said, 120,000,000 people are free-tiading with each other to-day. There is no soul in America who would have that altered. Though there are in the United States all shades of fiscal opinion, I venture to say that there is no soul now living who, looking back, would claim that without her customs barriers against the rest of the world the United . States could possibly have risen so quickly to her present wealth and greatness. Individual tariffs may at one time and another have been too high and have sheltered privilege, monopoly and abuses in various forms ; but the net result of the Protective policy as a whole—of the ring fence within which the whole population trades freely " with one another " while safeguarded from excessive competition from outside—has been the enormous prosperity which we see. It is the very corner-stone of America's greatness. There is no tariff-for-revenue-only Democrat in the country so savage that he does not concede this.

A tariff wall to-day between New York and New Jersey is as unthinkable as between Surrey and Sussex. It should —and in time will—be as unthinkable between England and Australia, between Canada and New Zealand. One hears sometimes foolish talk of manufacturers •or producers' in this or that part of the Empire being fearful of the competition of the Mother Country : of Canada being jealous of Australia. Even so Pennsylvania has been jealous of New Yolk : Michigan of Pennsylvania : Missouri of Illinois : and slowly as time goes on every State and city learns how the prosperity of each is the prosperity of the whole. Any growth in the wealth of New York means a step in the progress of Denver and San Francisco. So it must inevitably be within the Empire.

This persistent preaching that the analogy of the United States has no lesson for Britain because " the conditions are so different " is blinding us and hampers us in realizing our Imperial possibilities. The conditions are not different. The comparison being made rightly with the Empire as a whole, they are precisely the same. In the United States

we have before our eyes the finest possible commercial object lesson ; but by arguing as Lord Morley did we wilfully misunderstand it. Just as there is not a man in the United States- to-day who would change, in principle, the system on which the country has prospered so greatly, so a century hence, unless the whole British people goes mad, there will not. be a Briton who will not marvel. that the Empire took so long to -adopt the same system or who will for one moment contemplate returning to the conditions of to=day.

I beg you, Sir, to lend your weight to making the people mulerstand the fallacy of lord Morley's argument. It is almost a matter of life and death for the Empire. --Lain, Sir, - . H. PERRY ROBINSON.

[We are entirely in favour of Free Trade within the Empire and only wish that the Dominions would agree to it. Mean- while we are heartily in favour of Imperial Preferences so fsr as they mean a knocking off of existing duties. They are the nearest approximation we can get to Imperial Free Trade. We cannot believe in Protection on principle as against the rest of the world. We want to keep our carrying- trade. Free Trade is the true Protection for that.--En. SPECTATOR.]