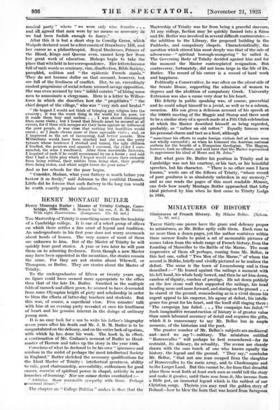 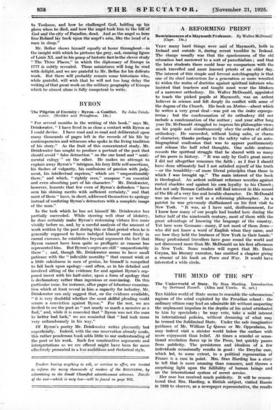 TELESE thirty-one pieces have the grace and delicacy proper to miniatures, as Mr. Belloc aptly calls them. Each runs to no more than a dozen pages, yet the author contrives within these narrow limits to paint a set of memorable pictures of scenes taken from the whole range of French history, from the founding of Marseilles to the Battle of the Marne. The most impressive of them all perhaps, coming from Mr. Belloc, is this last one, called " Two Men of the Marne," of whom the second is Moltke, briefly and vividly pictured as lie realizes the defeat. The scene is the town of Luxembourg and is thus described :—" Ile leaned against the railings a moment with his left hand, his whole body bowed, and then he sat him down, careless of dignity, careless of prestige. He sat down publicly on the low stone wall that supported the railings, his head bending more and more forward, and staring on the ground . . he stared at the ground, remembering as in a vivid dream his urgent appeal to his emperor, his agony at defeat, his intelli- gence too great for his heart, and the knell still ringing there : ' The campaign has failed. . . . The campaign has failed. " Such imaginative reconstruction of history is of greater value than much laboured accuracy of detail and requires the gifts, which it is unnecessary to say Mr. Belloc has in ample measure, of the historian and the poet.

The greater number of Mr. Belloc's subjects are mediaeval and--need we say?--military." The miniature entitled " Roncesvalles " will perhaps be best remembered—for its restraint, its delicacy, its actuality. The scenes are cleanly drawn with the sure touch of one who knows equally the history, the legend and the ground. " They say," concludes Mr. Belloc, "that not one man escaped from the slaughter of Xtoncesyalles to- the main. army,_ and to Charlemagne and to the Larger Land, But this cannot be, for from that dreadful place there went forth at least such men as could tell the story and make it greater, until there rose from it, like incense from a little pot, an immortal legend which is the noblest of our Christian songs. Therein you play read the golden story ig Roland=how he blew the horn that was heard from Saragossa

to Toulouse, and how he challenged God, holding up his glove when he died, and how the angel took him to the hill of God and the city of Paradise, dead. And as the angel so bore him Roland lay back upon the -angers arm, like the head of a man in sleep.'

Mr. Belloe shows himself equally at home throughout—in the insight with which he pictures the grey, sad, cunning figure of Louis XI. and in his grasp of historic fact in the clever study " The Three Places," in which the diplomacy of Europe in 1777 is subtly revealed. These miniatures will long be read with delight, and we are grateful to Mr. Belloc for his delicate work. But there will probably remain some historians who, while grateful, will wish that he will not too long delay the writing of that great work on the military geography of Europe which he almost alone is fully competent to write.