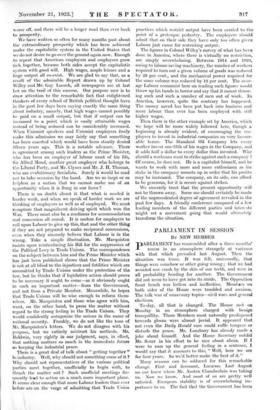 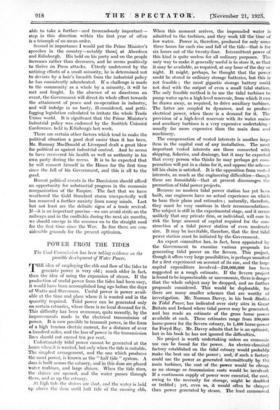 BY NEW MEMBER PARLIAMENT has reassembled after a three months' recess in an atmosphere strangely at variance with that which prevailed last August. Then the situation was tense. It was felt, universally, that things were somehow or other going wrong ; that we had avoided one crash by the skin of our teeth, and were in all probability heading for another. The Government did not seem to have got into its stride. The Opposition front bench was listless and ineffective. Members on both sides of the House were troubled and anxious. The talk was of unsavoury topics—civil wars and general elections.

To-day, all that is changed. The House met on Monday in an atmosphere charged with benign tranquillity. Those Members most naturally predisposed towards gloom were almost jovial. It appeared that not even the Daily Herald case could ruffle tempers or disturb the peace. Mr. Lansbury has already made a joke about himself. And the Home Secretary outdid Mr. Scurr in his effort to be nice about aliens. If I were to sum up the general feeling in a sentence, I would say that it amounts to this, " Well, here we are for four years. So we'd better make the best of it."

Many reasons can be adduced for this remarkable change. First and foremost, Locarno. Last August no one knew where Mr. Austen Chamberlain was taking us. Now we know. And most of us are pretty well satisfied. European stability is of overwhelming im- portance to us. The fact that the Government has been able to take a further—and tremendously important— step in this direction within the first year of office is a triumph of no mean order.

Second in importance I would put the Prime Minister's speeches in the country—notably those; at Aberdeen and Edinburgh. His hold on his party and on the people increases rather than decreases, and he seems positively to thrive on Press attacks. Utterly undeterred by the untiring efforts of a small minority, he is determined not to deviate by a hair's breadth from the industrial policy he has consistently adumbrated. If a challenge is made to the community as a whole by a minority, it will be met and fought. In the absence of so disastrous an event, the Government will direct its whole effort towards the attainment of peace and co-operation in industry, and will indulge in no hasty, ill-considered, and petti- fogging legislation calculated to irritate the whole Trade Union world. It is significant that the Prime Minister's industrial policy was endorsed by the Scottish Unionist Conference. held in Edinburgh last week.

There are certain other factors which tend to make the political situation a good deal easier than it has been. Mr. Ramsay MacDonald at Liverpool dealt a great blow for political as against industrial control. And he seems to have recovered his health as well as authority in his own party during the recess. It is to be expected that he will reassert himself in the House for the first time since the fall of his Government, and this is all to the good.

Recent political events in the Dominions should afford an opportunity for substantial progress in the economic reorganization of the Empire. The fact that we have weathered the Gold Standard storm unexpectedly well has removed a further anxiety from many minds. Last but not least are the definite signs of a trade revival. If—it is an important proviso—we can avoid strife on the railways and in the coalfields during the next six months, we should emerge in the summer-on to the straight road for the first time since the Wan In fine there arc con- siderable grounds for the present optimism.