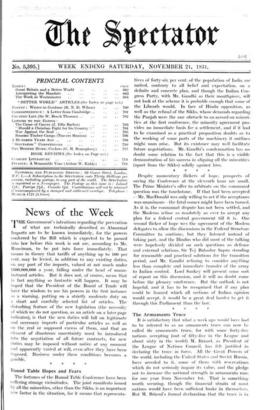 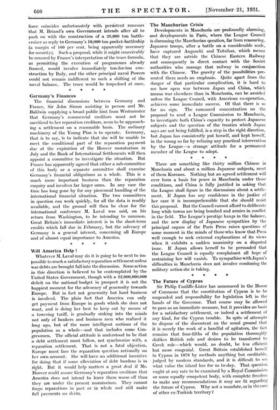 Page 1, 21 November 1931 — The Armaments Truce It is satisfactory that what a week
Close

The Armaments Truce It is satisfactory that what a week

ago would have had to be referred to as an armaments truce can now be called the armaments truce, for with some forty-five nations accepting (out of fifty-five in the League and about sixty in the world) M. Briand, as President of the League of Nations Council, has felt justified in declaring the truce in force. All the Great Powers of the world, including the United States and Soviet Russia, have acceded to it,' some of them with reservations which do not seriously impair its value, and the pledge not to increase the national strength in armaments runs for one year from November 1st. That is something worth securing, though the financial straits of most nations would have been sufficient brake in themselves. But M. Bfitind's formal declaration that the truce is in force coincides unfortunately with persistent rumours that M. Briand's own Government intends after all to push on with the construction of a 26,000 ton battle- cruiser as reply to Germany's 10,000 ton pocket-battleship (a margin of 160 per cent. being apparently necessary for security). Such a proposal, while it might conceivably be covered by France's interpretation of the truce formula, as permitting the execution of programmes already framed, would involve immediately ton-for-ton con- struction by Italy, and the other principal naval Powers could not remain indifferent to such a shifting of the naval balance. The truce would be torpedoed at once.