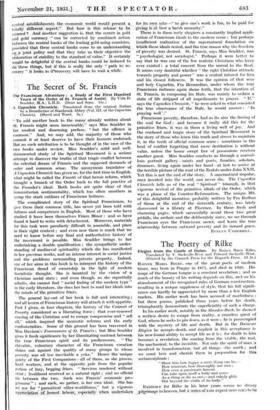 The Secret of St. Francis

The Franciscan Adventure : a Study of the First Hundred Years of the Order of St. Francis of Assisi. By Vida D. Scudder, MA., L.H.D. (Dent and Sons. 15s.) To add another book to the many already written about St. Francis might seem inexcusable," says Miss Scudder in her modest and disarming preface, " but the offence is common." And, we may add, the majority of those who commit it at least deserve to have their licences endorsed. But no such retribution is to be thought of in the case of the two books under review. Miss Scudder's solid and well- documented study of the Spiritual Movement is a serious attempt to discover the truths of that tragic conflict between the celestial dream of Francis and the supposed demands of order and common sense. The anonymous translator of A Capuchin Chronicle has given us, for the first time in English, what might be called the Fioretii of that heroic reform, which brought a branch of the Order back to the full practice of the Founder's ideal. Both books are quite clear of that humanitarian sentimentality, which too often smothers in syrup the stark outlines of Franciscan holiness.

The complicated story of the Spiritual Franciscans, to give them their common title, has never yet been told with fullness and competence in English. Most of those who have studied it have been themselves Friars Minor : and so have found it hard to write with detachment. Moreover, materials for this task were peculiarly difficult to assemble, and place in their right context ; and even now there is much that we need to know before any final and authoritative history of the movement is possible. Miss Scudder brings to her undertaking a double qualification ; the sympathetic under- standing of mediaeval spirituality which she has manifested in her previous works, and an intense interest in social justice and the problems surrounding private property. Indeed, one of her aims in this book is to interpret the history of the Franciscan dread of ownership in the light of modern Socialistic thought. She is haunted by the vision of a Christian social state ; and even though, as she regretfully

admits, she cannot find "social feeling of the modern type " in the early literature, she does her best to read her ideals into the minds of the primitive friars.

The general lay-out of her book is full and interesting ; and all lovers of Franciscan history will attack it with appetite. Part I gives, in four chapters, the history of the Counsel of Poverty considered as a liberating force ; that ever-renewed craving of the Christian soul to escape compromise and " sell all," which inspired the monastic reforms and the early confraternities. Some of this ground has been traversed in Miss Davison's Forerunners of St. Francis ; but Miss Scudder gives it fresh significance by her:illuminating contrast between the true Franciscan spirit and its predecessors. " The chivalric, voluntary character of the Franciscan vocation shines out against the quality of many groups to whom poverty was all too inevitable a yoke." Hence the unique gaiety of the. First Companions—all of them,• as she proves,

hard workers, and at the opposite pole from the popular notion of lazy, begging friars. " Services rendered without stint ; livelihood received as a natural right ; and no official tie between the two. Such was Francis' economic pre- gramme " : and such we gather is her own ideal. She has no use for " parasitical other-worldliness," but a vigorous Existence for Rilke in his later years seems no dreary

for its own sake—" to give one's work is fun, to be paid for -giving is at best a harsh necessity."

There is in these early chapters a constantly implied appli- cation of Franciscan ideals to the modern scene : but perhaps insufficient realization of the supernatural foundation on trhieh those ideals rested, and the true reason why the freedom of pbverty was desired. St. Francis, says Miss Scudder, was " psychologist, not sociologist." Perhaps it were better to say that he was one of the few realistic Christians who have ever existed i a total convert from the unreal to the Real. It seems very doubtful whether " the right Christian attitude towards property and power " was a central interest for him and his closest followers. It -was the opinion of that wise and holy Capuchin, Fm Bernardino, under whom the true Franciscan radiance again shone forth, that the intention of St. Francis, in composing his Rule, was mainly to ordain a state of life stripped of all impediments to prayer. " If," says the Capuchin Chronicle, " he were asked in what consisted the true observance of the Rule, he would answer : In praying well Franciscan poverty, therefore, had as its aim the freeing of the soul for God ; and because it really did this for the primitive friars, it was in them a living well of joy. And the confused and tragic story of the Spiritual Movement is the story of those who knew this truth and strove to maintain it, in the teeth of official common sense : sometimes in the heat of conflict forgetting that mere destitution is without- value, unleis the house swept free of possessions receives another guest. Miss Scudder conducts us through a marvel- lous portrait gallery—saints and poets, fanatics, scholars, dreamers, living again under her hand—at last to arrive at the terrible picture of the rout of the Zealots under John XXII. Yet this is not the end of the story. A supernatural impulse, once inserted into the world, can never die. The Capuchin Chronicle tells us of the real " Spiritual " triumph, in that vigorous revival of the primitive ideals of the Order, which was a phase of the Counter-Reformation. The unique MS. of this delightful narrative, probably written by Fra Ruffin of Siena at the end of the sixteenth century, was lately discovered in a library at Florence. In these fresh and charming pages, which successfully avoid those two great pitfalls, the archaic and the deliberately naive, we see through Franciscan eyes the Franciscan secret, and learn the true relationship between outward poverty and its inward grace.