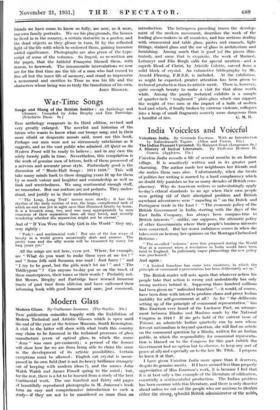 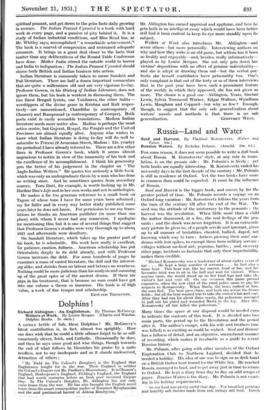 Voiceless India. By Gertrude Emerson. With an Introduction

Voiceless India records a life of several months in an Indian village. It is sensitively written and in its greater part charming. The author made her neighbours her friends and she makes them ours also. Unfortunately, when she treats of politics her writing is marred by a hard complacency which no doubt fitly punishes us for so many decades of British com- placency. Why do American writers so unhesitatingly apply to-day's ethical standards to an age when their own people were getting rid of their aboriginal problem and British merchant adventurers were " muscling in " on the Dutch and Portuguese trade in the East ? " The economic policy of the British Government in India, starting with the days of the East India Company, has always been compass-true to British interests "—unlike, one supposes, the altruistic policy of other Governments where their people's business interests were concerned. But her worst unfairness comes in when she takes over on hearsay her opinions on the Montagu-Chelmsford Reforms : " The so-called ` reforms ' were first proposed during the World War at a moment when a revolution in India would have been fatal to England. In judiciously vague phraseology the new policy was proclaimed."

" A limited franchise has come into existence, in which the principle of communal representation has been deliberately set up."

The British reader will note again that whatever action his people take that action is wrong and undoubtedly has only wrong motives behind it. Supposing three hundred millions had been given an " unlimited franchise "—it would, of course, have been done with intent to produce chaos and prove Indian inability for self-government at all As for " the deliberate setting up of the principle of communal representation," has Miss Emerson ever heard of the Lucknow Pact, an arrange- ment between Hindus and Muslims made by the National Congress in 1916 ? If she gets hold of the current issue of Triveni, an admirable Indian quarterly run by men whose fervent nationalism is beyond question, she will find an article on the communal question by a Hindu, written for an Indian public, in which the responsibility for communal representa- tion is blamed on to the Congress for this pact (which the Government had no option but to observe, to keep any sort of peace at all) and especially on to the late Mr. Tilak. I propose

to leave it at that.

I have given Voiceless India more space than it deserves, despite its genuine merits. If I have seemed less than properly appreciative of Miss Emerson's work, it is because I feel that it is at best only a fine example of the literature of edification, essentially a sentimentalist production. The Indian problem has been overrun with this literature, and there is only disaster ahead unless we cut out the people who are anxious to idealize either the strong, splendid British administrator or the noble, spiritual peasant, and get down to the grim facts daily growing in menace. The Indian Peasant Uprooted is a book with hard work in every page, and a passion of pity behind it. It is a study of Indian industrial conditions, and Miss Read has, as Mr. Whitley says, accomplished " a remarkable achievement.1 The book is a marvel of compression and restrained adequate comment. It brings us a great deal closer to the facts that matter than any deliberations of the Round Table Conference have done. Mother India stirred the outside world to horror and India to indignation ; The Indian Peasant Uprooted should shame both British and Indian business into action.

Indian literature is commonly taken to mean Sanskrit and Pali literature. There are half a dozen important vernaculars that are quite a millennium old and are very vigorous to-day. professor Gowen, in his History of Indian Literature, does not ignore them, but his book is weakest in discussing them. The two finest Bengali lyrists, one Vaishnava, the other Saida— worshippers of the divine grace in Krishna and Kali respec- tively—are unmentioned, Chandidas (a contemporary of Chaucer) and Rainprasad (a contemporary of Cowper). Both poets exist in easily accessible translations. Modem Indian literature needs more notice also. Madras is perhaps the most active centre, but Gujerat, Bengal, the Punjab and the United Provinces are almost equally alive. Anyone who wishes to know what Indian literature is doing to-day will do well to subscribe to Triveni (9 Armenian Street, Madras : 12s. yearly) the periodical I have already referred to. There are a few other flaws in Professor Gowen's book, which it seems almost ungracious to notice in view of the immensity of his task and the excellence of its accomplishment. I think his generosity gets the better of his judgement in the chapter on " The Anglo-Indian Writers." He quotes too seriously a little book which was only an undergraduate thesis by a man who has done no writing since. And he sometimes quotes from secondary sources. Tom Dutt, for example, is worth looking up in Mr. Harihar Das's Life and in her own works and not in anthologies.

He makes a far too generous reference to a small book on Tagore of whose tone I have for some years been ashamed ; my far fuller and in every way better study published some years later he does not know. For permission to use my trans- lations he thanks an American publisher (in more than one place) with whom I never had any connexion. I apologize for mentioning this, but it is one of several.things that suggest that Professor Gowen's studies were very thorough up to about 1921 and afterwards were desultory.

On Sanskrit literature, which takes up the greater part of his book, he is admirable. His work here really is excellent, for patience, caution, fullness. American scholarship has put Orientalists deeply in its debt already, and with Professor Gowen increases the debt. For some hundreds of pages he examines a mass of-varied literature, the dull and the interest- ing alike, and shrinks from no labour and betrays no weariness. Nothing could be more judicious than his analysis and summing up of the great epics or of the ancient drama. If there are gaps in his treatment, that is because no man could have got into one volume a theme so immense. His book is of high value, a 'stork of fine temper and scholarship.