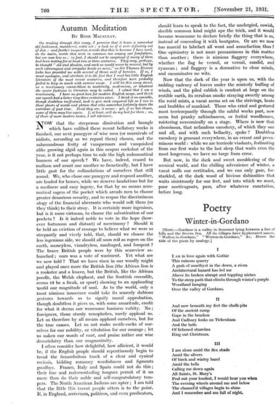 On reading through this essay, I perceive that it bears a somewhat old-fashioned, mouldered, antic air ; a look as if it were definitely out of date ; and further inspection reveals that this is because I have used, in the main, words that were in common use among our forefathers, but are now Lea so ; in fact, I should not be surprised if many of them had been resting for at least two or three centuries. They may, perhaps, be thought " old and obsolete, and such as would never be revived, but by such extravagant and irregular heads as mine," as Sir Thomas Broume (who has provided me with several of them) said of heresies. If so, 1 must apologise, and attribute it to the fact that I read but little English literature of the most recent centuries, and therefore have probably failed to keep in touch with current usage. I will let this essay stand, as a reactionary counterblast to modernity, modernism, or whatever the newer fashions in literature may be called. I admit that I am a reactionary. I have no great love for modern English usage, and think our speech had a better ring three centuries since.' I think it an amiable, though doubtless ineffectual, task to give such corporeal life as I can to those ghosts of words and phrase that echo somewhat forlornly down the corridors of past time. Dead they are, it seems : yet, if we but choose, some of them may live again. I, at least, will do my best for them ; so, of those of more modern tastes; I ask tolerance.

OW that the streperous dimication and brangle N which have calified these recent bellatory weeks is finished, our next. panegyre of wise men (or murnivale of nidiots, according as we regard them) chosen, and the salamandrous ferity of vanquerours and vanquished alike growing algid again in this ocapus cockshut of the year, is it not perhaps time to tale the high rodomontical banners of our speech ? We have, indeed, ceased to malison and a-runt one another so frenetically, but I have little gust for the collaudations of ourselves that still sound. We, who chose one panegyrc and respued another, are lauded for heroes, while we deserve laudations but for a mediocre and easy ingeny, for that by no means acro- matical sagess of the pocket which areads men to choose greater denarious security, and to respue the discriminous alogy of the financial aberrants who would colt them (so they think) to their stroy. It is certainly more ingenious, but is it more virtuous, to choose the salvatication of our pockets ? Is it indeed noble to vote in the hope (how- ever fortunous and distant) of mercimony ? Should it be held an eviction of courage to believe what we were so strepantly and vively told, that, should we choose the less ingenious side, we should all soon roil as rogers on the earth, moneyless, viandryless, naufraged, and forspent ? The brave British people were by this scareview as- hunched ; ours was a vote of wariment. Yet what are we now told ? That we have risen in our woodly might and played once more the British lion (the African lion is a rookster and a knave, but the British, like the African poodle, the Welsh elephant, and the Scottish crocodile, seems td be a freak, or sport) showing to an applauding world our magnitude of soul. As to the world, only a most nimious -innocence could take its scarcely- dubious gestures towards us to signify moral approbation, though doubtless it gives us, with some amaritude, credit for what it deems our wonesome business vafrity. No ; foreigners, those sturdy xenophobes, rarely applaud us. Let us therefore by all means applaud ourselves, but for the true causes. Let us not make nestle-cocks of our- selves for our nobility, or vitulation for our courage ; let us naken our .words of cant, and praise rather our wise denariolatry than our magnanimity.

I often* consider how delightful, how allieient, it would be, if the 'English people should repentinously begin to tread the funambulous track of a clear and cynical meiosis, bidding romancy wordishness and figments goodbye. France, Italy and Spain could not do this ; their fine and rodomontading tongues permit of it no more than do their noble and self-congratulatory tem- pers. The North American Indians are apter ; I am told that the little this ta cent people utters is to the point, If, in England, scriveners, politicos, and even predicators, should learn to speak to the fact, the unclergied, cowish, docible common kind might ape the trick, and it would become wonesome to declare briefly the thing that is so, instead of concealing it with boutgates. Or are we now too marcid to labefact all wont and assuefaction, thus ? One opiniastry is not more peccanimous in this matter than another ; there is nimious flaggery everywhere, whether the flag be vermil, or vermil, candid, and eyanean ; and flaggery is a dormative to clear minds, and cacuminates no wits.

Now that the dark of the year is upon us, with the sadding cadency of leaves under the roisterly buffing of winds, and the piled cablish is candent at large on the restible earth, its cerulean smoke straying sweetly among the rorid mists, a vacat seems set on the strivings, heats and brabbles of mankind. Those who cried and gestured most terricrepantly through the sakful weeks past, now seem but pranky saltimbancos, or ferital woodhouses, roistering coxeomically on a stage. Where is now that abominous, that nefandous cacodoxy, of which they one and all, and with such bellacity, spoke ? Doubtless cacodoxy is grassant everywhere, in an errant and pecca- ruinous world : while we are terricole viadants, festinating from our first wake to the last sleep that waits even the most longevous, we have no targe from error.

But now, in the dark and sweet mouldering of the scenical world, and the chilling advenience of winter, a vacat nulls our certitudes, and we can only gaze, for- starkled, at the dark wood of bivious dubiosities that waits sinistrously for our feet, and into which we must, poor noctivagants, pass, after whatever cunctation, before long.