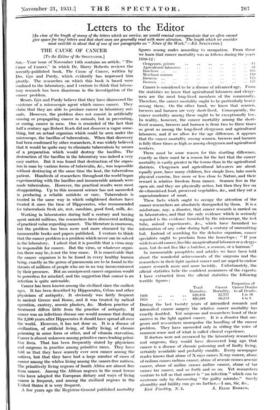 Letters to the Editor (In view of the length of

many of the letters which we receive, we would remind correspondents that we often cannot . give space for long letters and that short ones are generally read with more attention. The length which we consider most suitcble is about that of one of our paragraphs on " News of the Week."—Ed. S'rEcrAroa.] THE CAUSE OF CANCER [To the Editor of the SPECTATOR.] S1R,—Your issue of November 14th contains an article, " The Cause of Cancer," in which Dr. Harry Roberts reviews the recently-published book, The Cause of Cancer, written by Drs. Gye and Purdy, which evidently has impressed him greatly. The researches on which this book is based were confined to the laboratory, and I venture to think that labora- tory research has been disastrous in the investigation of the cancer problem.

Messrs. Gye and Purdy believe that they have discovered the existence of a microscopic agent which causes cancer. They claim that they are able to produce cancer in laboratory ani- mals. However, the problem does not consist in artificially causing or propagating cancer in animals, but in preventing, or curing, cancer in men. One is reminded of the fact that half a century ago Robert Koch did not discover a vague some- thing, but an actual organism which could be seen under the microscope, the bacillus of tuberculosis. When that discovery had been confirmed by other researchers, it was widely believed that it would be quite easy to eliminate tuberculosis by means of a preparation which would destroy the bacillus. The destruction of the bacillus in the laboratory was indeed a very easy matter. But it was found that destruction of the organ- ism in man by various forms of tuberculin, &c., was impossible without destroying at the same time the host, the tuberculous patient. Hundreds of researchers throughout the world began experimenting with the bacillus and innumerable animals were made tuberculous. However, the practical results were most disappointing. Up to this moment science has not succeeded in producing a reliable antidote or cure. Tuberculosis is treated in the same way in which enlightened doctors have treated it since the time of Hippocrates, who recommended for tuberculosis fresh air, rest, sunshine, good food, milk, &c.

Working in laboratories during half a century and having spent untold millions, the researchers have discovered nothing of practical value regarding cancer. The literature is enormous, but the. problem has been more and more obscured by the innumerable books and papers published. I venture to think that the cancer problem is a problem which never can be solved in the laboratory. I admit that it is possible that a virus may be responsible for cancer. But the virus, or whatever organ- ism there may be, is not the true cause. It is conceivable that the cancer organism is to be found in every healthy human being, exactly as the germs of pneumonia are to be found in the throats of millions of people who are in no way inconvenienced by their presence. But an omnipresent cancer organism would be powerless for mischief, and the suggestion that cancer is an infection is quite untenable.

Cancer has been known among the civilized since the earliest ages. It has been described by Hippocrates, Celsus and other physicians of antiquity. It obviously was fairly frequent in ancient Greece and Rome, and it was treated by radical operation, cautery, arsenic plasters, &c. Modern practice of treatment differs little from the practice of antiquity. If cancer was an infectious disease one would assume that during the 2,300 years after Hippocrates it should have spread all over the world. However, it has not done so. It is a disease of civilization, of artificial living, of faulty living, of chronic poisoning in some form or other, and of vitamin starvation. Cancer is almost unknown among primitive races leading primi- tive lives. That has been frequently stated by physicians and surgeons in practice among primitive races. They have told us that they have scarcely ever seen cancer among the natives, but that they have had a large number of cases of cancer among- the whites living among the cancer-free natives. The primitively living negroes of South Africa are almost free from -cancer. Among the African negroes in the coast towns who have adopted the European dietary and ways of living cancer is frequent, and among the civilized negroes in the United States it is very frequent.

A few years ago the Registrar-General published mortality figures among males according to occupation. From these we learn that cancer mortality was as follows during the years 1910-12 : Clergymen, priests • •

There must he some reason for this startling difference, exactly as there must be a reason for the fact that the cancer mortality is vastly greater in the towns than in the agricultural districts. Clergymen and agricultural laLourers arc about equally poor, have many children, live simple lives, take much physical exercise, live more or less close to Nature, and their reward is relative freedom from cancer. Seamen live in the open air, and they are physically active, but then they live on de-vitaminised food, preserved vegetables, &c., and they eat a superabundance of meat.

These facts which ought to occupy the attention of the cancer researchers are absolutely disregarded by them. It is a misfortune, nay, a disaster, that cancer research is carried on in laboratories, and that the only evidence which is seriously regarded is the evidence furnished by the microscope, the test tube, animal experiMents, &c., which have furnished no information of any value during half a century of unremitting toil. Instead of searching for the delusive organism, cancer Specialists ought to proclaim from the housetops : " If you wish to avoid cancer, live like an agricultural labourer or a clergy- man, but do not live like a butcher, a seaman, or a barman."

• In innumerable pamphlets and articles we have been told about the wonderful achievements of the surgeons and the researchers in their fight against cancer and are urged to endow cancer research more and more lavishly. Unfortunately, the official statistics belie the confident assurances of the experts. I have extracted from the official statistics the following terrible figures :

During the last twenty years of intensified research and intensified cancer surgery the relative cancer mortality has exactly doubled. Yet surgeons and researchers boast of their success in the fight against cancer. It is a disaster that sur- geons and researchers monopolise the handling of the cancer problem. They have succeeded only in stilling the voice of common sense and of what is called clinical experience.